I'll have a little giggle, please.

After seeing the new cue card over at CASology, I had a ping moment. I tend to obey my pings. They can be irritating if I don't...Also, as many of you know, I'm really working hard to use up as much of my stash as cardmakingly possible. There, in my tackle box of brads, tucked away for at least 5 years (probably more...), I knew I had a brad that actually said "giggle"! The little hands in my head rubbed themselves together, and thought, "whoopie, we've got this challenge won!!" But the more the real me thought about it, the more I knew it just wasn't quite what I wanted. But at that point in my day, I had to stop thinking about it so hard, because Lizzy came over. She's 15 and funny. And fun! So while she was supposed to be doing her homework, I stood there and read her one-liners in hopes that a little better idea would ping. We both laughed at the one-liners until tears ran down our faces, and probably made grandpa wonder what the heck we were up to. When she and I get together, it's always fun! 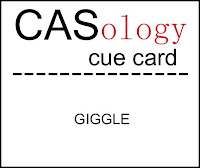 Then, after Lizzy left for home, another ping hit. A humdinger of a pinger (sorry...) (well maybe only a little...). I remembered what my older sister did to our younger sister's kids when they were little and full of mischief. Sara and Brett were probably 7 & 9 years old, it was close to Christmas, and the threat of no visit from Santa wasn't working. Now, I don't know where Sue came up with this, but she made tags, and attached them to bags full of marshmallows. After reading their tag, the two little jewels took notice. Brett burst into tears. His mother said to start behaving. He did, Sara did, and all was right with the world...at least until after presents on Christmas day....For today, and for the challenge, I made my own tag. I still chuckle at it, but I'm naughty like that. Just ask my friend Mary.

I tried to make it big enough to read without you having to click on the photo, but alas, you'll have to click if you can't quite read it. I found the snowman in a clipart gallery, and I regret to say, I didn't take notice from which company it came. But he fit just right. I colored bits of him with copics and SU markers, and added a snowball to his upturned hand, and then used some white flocking to fluff it up a bit. Computer generated font for the sassy saying, a bit of MME dp paper (scrap), and a scrap of ribbon. I used the Cricut to cut the tag. Giggle away my friends, and enjoy a little happy dance.

This made me giggle - especially the story that went with it! The direst of threats imaginable! Love your humdinger of a pinger - thanks so much for playing along with us at CASology this week, Bev!

Oh my, Bev, your post and tag gave me a laugh burst, and now my colleagues are giving me squinty eyes, wondering what I'm up to. I showed them, and a full-on giggle-fest is taking place (apologies for any typos, as a result!). Love your story, love the tag. I'll take a bag of your pings, please, if the results are like yours! Have a happy dance, wonderful day!
c

I love the story. I've seen snowman poop before at craft sales but never as a deterrent for bad behavior. Great idea for the challenge. Wish I could come up with something.

Never heard of snowman poop before, so this definitely gave me a case of the giggles! What a fabulous pingy post and a super fun tag! Anita :)

haha! What a fun tag :) Thanks for playing along at CASology this week!

This is just too cute! I love your little snowman...he reminds me of the snowman in the movie Jack Frost, where the dad dies in a car accident and comes back as a snowman...your card is just as cute as the movie!

Oh yeah, one humdinger of a pinger is right! I love the polka dot paper! Clever, clever idea to make a wee little threat into a swell gift tag!

Sue needs to market that idea!

Too adorable, Bevie! I found these one time at a little boutique in town (but not nearly as cutely done as yours), tied to a tiny bag of mini marshmallows. It's a brilliant threat idea! I enjoy hearing how you and Lizzy giggle together!

A deinitely giggle here Bev. Thank you so much for sharing with us this week at CASology!