Without all my usual chatter, I have a card to share. It's a pretty QACAS one. Playing along with the current challenge at City Crafters, where we're to use black, white and gold as an accent. 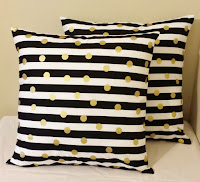 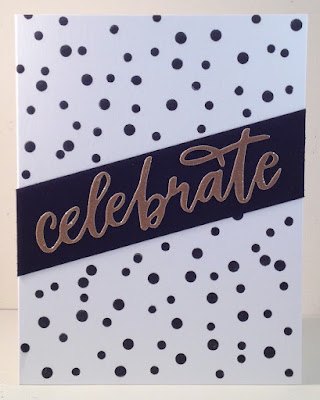 One Studio Calico Stamp set, using the little dots, one Studio Calico 'celebrate' die, and a couple of scraps; gold glitter and black. EZPZ, and I like the way this turned out.

Now. I've got some 'splaining to do, so if you want to skip this next part, feel free. I haven't been crafting, posting or commenting very much as of late. Wasn't sure how much to share, wasn't sure how to say what I wanted to say, and wasn't sure you'd want to hear. And I spent a little time reeling with total brain shut down, too. But I'm going to give this a go, and see what falls out of my brain and onto the keyboard. Some of you know that my DH is a few (20) years older than me, and I'm no spring chicken. Overall, he's in decent health. Not great, not good, but decent. Took him to a new doctor a few weeks ago. She sent him for lab work (all wonderfully normal), and two CT scans; one of his brain, and one of his lower abdomen and legs. I expected something to show on his legs, so wasn't surprised to find narrowing of his distal femoral arteries in both legs (just above his knees).  Our youngest son, a Family Practice physician said we should leave them alone if he can tolerate the coldness, as he doesn't have any pain. The Vascular Surgeon we went to said to readdress this after he gets the other thing looked at/taken care of. His narrowed arteries are serious, but not acute, and not life or limb threatening. But it's the other thing that tossed me around like a rag doll in a tornado. For his sake, I had to pretend normalcy, but inside I was functioning in a fog. Thankfully, that stage has passed. Next moth, we go see a Neuroscience Team at Froedtert Hospital in Milwaukee for a consultation and to schedule final diagnosis testing. There's a real possibility that DH has a condition called Normal Pressure Hydrocephaly (NPH). I'll let you google that, but it affects several aspects of a person, and if left untreated, well, there's only one outcome... There is treatment, however. It's placement of a shunt in his brain. Having worked as a Surgical Technologist, I know what that is, and how the procedure works. "Minor" brain surgery.

Meanwhile, I stick close to him. His fall-risk has greatly increased as his gait has substantially worsened in the last few months (a symptom of NPH). And we wait. Full of questions. More full of prayers. Hoping that if his final diagnosis is NPH, that he's a candidate for the shunt. His regular doc, and the radiologist seem to think that's what he's got, but we have to wait for the Neuroscience team's diagnosis. It's going to be a long year. And I don't know if I'll have time or energy to be anything other than a caregiver. Did that sound selfish, or self-pitying? Hope not, that's not what I'm trying to convey. I'm fully equipped, and absolutely willing to care for my beloved in all things. But I may not be able to enjoy crafting and such. As I'm sure you'd agree, my priorities must be elsewhere. I will try to get in here when I can, and visit you all when I can, but it may all be very sporadic. So that's what's been keeping me busy. We're okay; trusting in God's promises to be with us, and to keep us. Since I've taken up a good deal of your time, I'll stop now. Feel free to email me with any questions, and I'll do my best to get back to you. Thanks for listening, and Happy Dances everyone.
Posted by Happy Dance at 8:49 AM 33 comments:

A very Happy (belated) Birthday to Sandie; she of London Days fame. Sandie recently celebrated a milestone birthday, and I wanted to wish her the very best and make a special card. I'm very late with this, but the sentiment remains. You all know her, and if you don't (and if you don't then I don't know where you've been hiding...) click on the link and have a nice, leisurely wander around her blog! Sandie is one of those bloggers whose cards are always delightful, filled with delicious white space, and many times have purple on them! I love stopping by her blog to see her latest creations. You'll find her as a DT member on some of the most popular challenge sites in blogland, and it's no wonder; she's an amazing cardmaker! It's a pleasure to "know" her! Someday, if I ever make it across the pond, I hope to actually meet her in person! I'm sure if that happens, London will never be the same!


Card?, you ask? Uh-huh. Yep. You betcha. It's her birthday (or in my case, an extension of it) after all. Couldn't let her celebration go by without one! 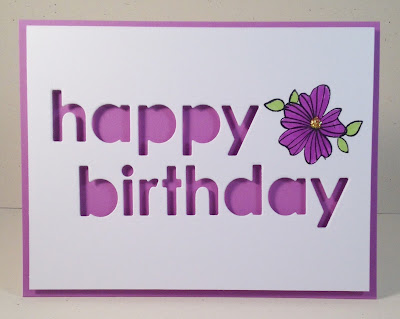 My darling daughter Cathy is the world's greatest lover of all things purple. Sandie is a close second! Naturally, I had to go with a dash of purple for her card. The 'sentiment' is a die cut from MFT, and the sweet little flower is from SSS's new Wild Beauty set. Got out a couple of Zig markers to color the bloom, and then added a smidgen of Stickles in the center for a bit of pizazz. Overall, a pretty CAS card; just the way the birthday girl likes them! It's on its way, I promise, Sandie!

Happy birthday my friend. Hope that your day was celebrated exactly the way you wanted, and that your upcoming year is as sweet as you are. I wanted to throw you a little party here, but DH's health issues have pretty much taken over the hours in my days. I have been thinking of you, and wanted you to know that it's an honor and pleasure to know you. You're one of those kind and welcoming bloggers, who've made me and hundreds of others feel right at home in this cardmaking world. Even though I'm just echoing what others have said, I am glad to know you, and wish you all good things today and always! Birthday blessings surrounded by giant hugs!

P.S. Miss Kylie has thrown a little link up party on her blog, Kylie is Addicted to Stamps, to which I will add my card. And also, the DT at Time Out has a new challenge celebrating Sandie, where I will also add my card. Thanks ladies!
Posted by Happy Dance at 8:18 AM 23 comments:

I've been pretty sporadic posting and commenting lately. Without going into all the details, it's been a difficult first part of the year. DH has been battling some health issues, and one of my DS has as well. God didn't promise us a rose garden in this world, and in fact, He said there would be challenges. So with His help and guidance, we work through them trusting that "...all things work for good..." I'm reminded to give thanks to Him for all of the blessings He's so richly bestowed, and also to give thanks for the family and friends who support, encourage, and lift me up when times are challenging. This card is for you... a little tear because my eyes well up when I think of the wonderful people I've met through this medium. You bring me joy. You give me strength. You bring beauty into my world. 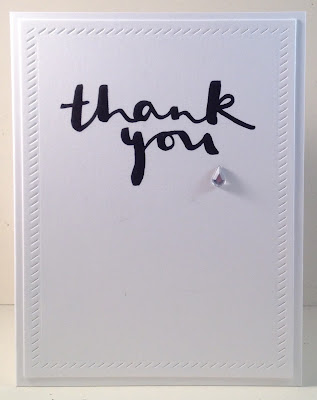 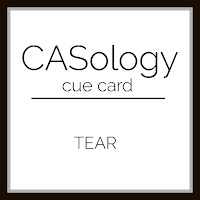 Sometimes a challenge just makes a card appear in my brain. I wanted to say 'thank you' but wasn't quite sure how to put it together. CASology came through in less than a heartbeat for me. Thanks, then, to you all, and to the CASology DT who are all inspiring designers.