more fun in the craftroom

Rather than finishing the reorganization in here, I'm playing. But it's okay, no one else will do it, so whenever I get around to it will be just fine. And besides, it's more fun to play with paper than to organize the supplies. I've played too at a few blog hops. Check them out...there are some nice goodies involved. First I hopped along over at Avery Elle, who are showcasing their new stamp sets. (Pardon me while I wipe the drool off my chin...) And then I popped over to Paper Smooches, and hopped along there. (Gosh darn it, more drool!!). And last, I hopped at The Alley Way Stamps. ('Scuse me while I go get a towel now...) If you don't own any yet, here's your chance. At some point soon, you should hop on over too!

Now. Let's move onto CASology and their latest challenge. Number 33 is circle. I love circles, second only to squares, but for some reason, I was stumped! Until late last night, right before bed. It did turn out fairly well, I did figure out how to incorporate circles. 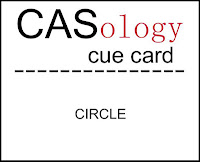 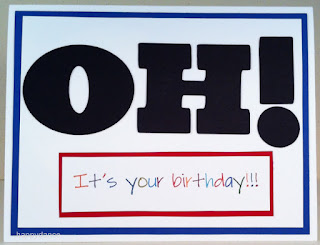 So okay, it's lame, the "o" in oh, and the "o" in the exclamation point. But it's all I had *sigh*. If the pinging really fires up again, I'll make something else, just don't hold your breath. And if you think about it, long and hard, there might be a chuckle in it--(oh = o = circle). A teensy chuckle. Barely imperceptible chuckle...

Scraps of random black (cut with my Cricut), red, and blue cardstock, SU white base, and computer generated font. Well, who knows, maybe just like Arnie, I'll be back...until then, happy dances.

LOL! Super fun take on the cue word! Thanks for playing along with CASology this week!

Seriously, I think your interpretation is CLEVER! I am in the same stumped boat as you - even though circles should be a slam dunk! Fabulous bold colors that work perfectly with the big old OH! Nice touch to add some color in the sentiment panel! Sweet job dear friend :)

Big chuckle at the big Oh, Bev ... sooo clever, especially with the rainbow sentiment and the vibrant borders! So pleased you did this instead of re-organising! If you're not blog hopped out, there's also one at TAWS with yummy goodies up for grabs! Anita :)

You should see the smile on my face right now...it's rather large! :) This is just WAY too clever! I love the humor in this! Clean and "spot on!" heehee.
Thanks so much for playing along with us again over at CASology!!

This is so NOT lame - I think it's really fun! Love the bold black and the colours below - and the simple layout! Thanks so much for playing along with CASology this week, Bev (and thank you for your kind comments on Erin's blog-crush post!)

Eeek This is so clever Bev! I love it. Thank you so much for sharing with us this week at CASology!

Super take on the challenge! Thanks for joining us this week at CASology!