I won't be complaining about the snow amounts here on the eastern shores of Lake Michigan. I know that the East Coast is about to get hammered, and with many more inches/feet than we got through the night. And since I'm snowed in, why not play with paper?!!! Oh yeah.
I'm back to CAS. After a brief foray into the realms of the more pretty/fussy cards, I have to get back to what seems to work best for me. Ahhhhh...... Lots of clean white space on the card I made for this week's CAS-ual Fridays challenge. The theme is "Love Song" in honor of the upcoming Grammy awards. I chose Just the Two of Us, written by Bill Withers, William Salter, and Ralph MacDonald, sung by Grover Washington, Jr. and Bill Withers, and won the Grammy for Best R&B Song in 1982. After raising our children, it's just the two of us here at home now. Not a bad thing. Lots of quality time for DH and me.

Be sure to head over to CAS-ual Fridays and play along to your favorite love song. (Dang! Lyrics!) 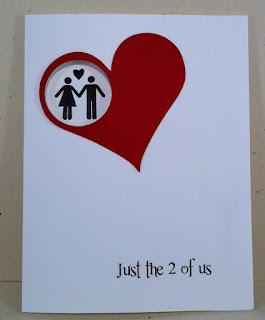 The idea hit like a "PING" in my head. And then it translated right to my fingers. Red scrap for the heart, which was punched through, as was the white. The image is really on the inside of the card, though it's difficult to tell in the photo. White SU cardstock and all SU inks, the image stamp is Amy Tangerine's Hey There, and a computer generated font. The inside is just for the DH, sorry....
Happy Dances.

Love the boldness of the red and the romantic hand-holding couple completely encased in the heart ... so sweet! Anita :)

Yep - love the vast white space too! Perfect choice of font for the sentiment. The placement of the heart and the sentiment balances the card perfectly!

That was such a sweet post, Bev, with a wonderful tease at the end. You've made a romantic card for your lucky DH!

(Welcome back to CAS, you do it well!! I'm jealous that you have a crafty PING in your head. Usually when there is a PING in my head, it's more along the lines of a senior brain frat!)

What a fantastic design!

Eeeeeek.... Love this! So creative and bold.... love how you have the image within a heart.

This is really awesome and I love your song inspiration! Thanks for playing with us at CAS-ual Fridays!

I missed this one somehow, so good thing it was chosen as a contender - love it!

Wow - Hannelie, Ardyth and you in the winner's circles. Hoot Hoot chicas!

Congrats Bev on being a contender!!!

Oh, look, hon, your PING paid off in a huge way!! I'm so happy for you to get recognized from CFC for this fabulous card, Bev!!