Stopping back in before I have to get to the housework (blech!). I've wanted to play over at CASology for the last several weeks, but haven't had the opportunity to do so until today. DH slept in, and now he's having his breakfast, so things are working out pretty well this morning. While he's occupied thusly, I can get a post written. Later I hope to get to a little commenting...


This week, CASology has this cue card: 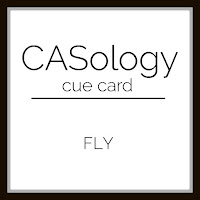 A while back, Jen sent me an envelope chock-a-block full of little birds. And birds, well most of them anyway, fly, don't they? Had to use one here: 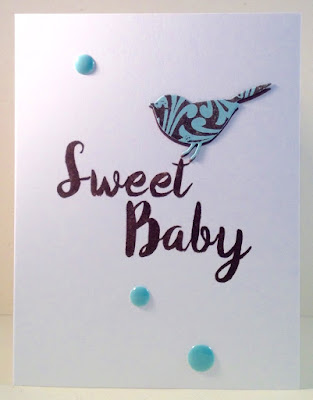 Actually, I used two birds. There's a brown one acting as a shadow beneath the blue one. I stamped a pattern in brown over the top of that sweet little blue bird, and I like the way it turned out. Those are Altenew's alphabets stamped in the same brown, and a few enamel dots just for fun. Pretty CAS. You all have a fun weekend, and Happy 4th to my friends in the US. As always...

I love this...the blue and brown together are the perfect color combo for your sweet little bird...and you know I love all the fabulous white space!

Such a sweet baby card! I'm totally loving your colour combination too. Gorgeous!

So deliciously CAS, Bev, love this gorgeous colour combo ... your little bird is so sweet in it's lovely patterned plumage! Still thinking of you, mon amie! Big hugs & bisous, Anita :)

Well, wasn't that sweet of Jen to do! I love your card, Bev, so airy and fresh! Great layering of that prety bird, too!

(And I meant to add a thank you for playing along at CASology...and sorry I spelled "pretty" wrong...typing too fast!)

You layered bird is beautiful. Love the colour combination, and the pretty pattern stamped over the top bird. Great design, Bev!! xx

Such a fabulous colour combination, Bev, and love that layering of that sweet little bird too! Just adorable! Thanks so much for sharing with us at CASology this week!

Love the pattern stamped on the die cut bird, Bev! So glad you were able to play along with us at CASology this week!

I love the pattern on the bird, Bev, and I must remember to use my Altenew alphabet. They made such a wonderful sentiment on your card.