It's really not that hot outside. Only 81 degrees F., but I've spent the last hour and more vacuuming and dusting. Into the corners. Up on the ceiling. Behind and under things. And now I'm dripping down the back of my neck and my arms are sticking to my desk as I write this. Ugh. So I'm taking some time to post a couple of cards in order to cool off. That's my story and I'm sticking to it... Two pretty CAS cards. The first one will play at City Crafters, and the second will head off to SSS Work It Wednesday and Addicted to CAS.

I chose some pastel inks and kept it really CAS. 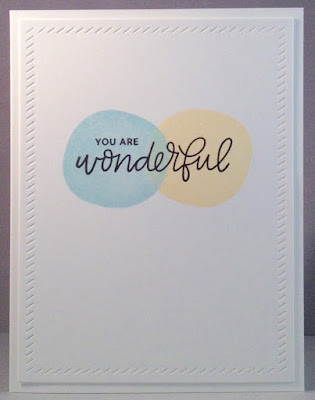 I stretched some flower stamps from Altenew, but used the backs to create some wonky overlapping circles. The inks are both from Fresh Inks found at Impress, and the sentiment is from Pretty Pink Posh. The panel was die cut with an Avery Elle die. *sigh*

The theme this month at Work It Wednesday is "Summer." 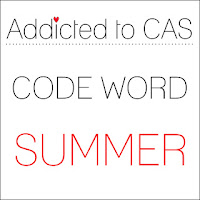 I think watermelons are summery, don't you? 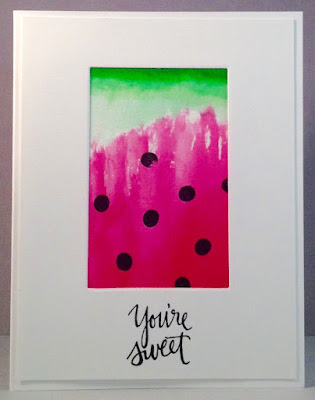 I saw Taheera's card over at the Winnie and Walter blog, and tried to replicate it. A whole front panel didn't work for me, but a small one framed by a die cut-out did. I smeared some Picked Raspberry on a sheet of watercolor paper, and pulled it up with some water. The 'rind' was made with a Zig marker and then pulled down with my water brush. I stamped some dots on it and added the sentiment which is from a C9 set. I'll show you Taheera's card so you can go ga-ga over it too.

And since I'm feeling less sticky, I've got other things to get to. Hope your weekend is wonderful. Blessings to you!

Love both of these CAS cards Bev! It was pretty hot here today too, but I'll take it. YKW is present so early to bed for me, hope you are luckier!

I always admire the punch an uber CAS card can give so your first card is a big winner in my book. And can I just say that I am totally in love with your watermelon card. It's absolutely fabulous in an Andy Warhol kind of way. Genius!

Fantastic cards!! Love the simple, clean look of them both. Sorry about the sweaty back...yuck! 81* is too hot for me....I'll take 61* any day! LOL, my house always seems cleaner during the winter months! Continued prayers for you and hubby!

WOWZERS! Where to begin? Your cards are amazing. I totally love the simplicity of the first and the creativity of the second. They both make me happy. Now, you take care of yourself!! Don't be out during the heat of the day and make sure you hydrate. Lack of hydration will not help with those YKW's! Big hugs!

these are seriously fabulous Bev (sweat and all lol) Great idea to add bold colour circles behind the sentiment and the watermelon window is making my heart melt!

Well your first card makes me do a happy dance...CAS perfection and card 2....well what a fab way to create a watermelon. So very creative, love it!

I'm guessing the 'glowing' has subsided by now, Bev ... hope today is cooler for you! Oh my, these two deliciously CAS cards are positively blissful ... the soft creamy yellow with the pastel blue ... yep, wonderful ... and that mouthwatering watermelon ... truly scrumptious! Actually I prefer your take to the original! Bon dimanche, mon amie ... big hugs & bisous, Anita :)

Your CAS-loving friends won't mind how CAS these are, Bevie, in fact, we LOVE them that way! Your watermelon is especially fabulous! You really captured the vibrancy of the red and green and how they ombre into lighter shades!! Have a wonderful Sunday, my little friend! Love and hugs, Darnell

Your two colour card is an absolute delight. Two lovely cards . Thanks for joining in at City Crafter.

Fabulous CAS design on both cards...LOVE your watermelon image...WOW! Thanks so much for joining us at ATCAS!

Nothing says summer like watermelon. Terrific card! Thanks for sharing at ATCAS!

You know how to avoid getting that hot, don't you? DON'T CLEAN!! That's my method!! I love both of these cards. I have got to pay more attention to the backs of stamps because I love how your wonky circles work with the sentiment. And your watermelon card is amazing. I love the smaller panel surrounded by the fresh white!

You have gotten yourself into a mighty sticky situation ... I think both cards work for two colors! They haven't said any darned thing about 'shades' have they? At any rate, they are both darling, super fun, and delicious... xx
=]

Glad you got a break to cool off from all your hard work. Housework ... ughhhhh!! Much more fun being on the computer, or even better yet, creating a card. Two creative cards Bev! LOVE them both. The two overlapping wonky circles is so clever. And I love your version of a watermelon slice much better! It made me crave a piece!! xx

Watermelons are definitely summery. gmta
thanks for playing along with my challenge at ATCAS!

I adore the simplicity of your first card!! So fabulous!!! However, my favorite is that watermelon cards. You totally ROCKED this challenge!!! That panel looks fabulous!!