I seem to be in a bit of a rut. Watercoloring flowery images. I've done several, but won't bore you with all of them. I sent one off to my sister Lisa for her birthday, and we'll save that one for a later post. There's something calming about doing a bit of fussy watercoloring, isn't there? But after today, I'm going to put them away for a while and break out something else. I have enjoyed them, though.

First I thought I'd play in a new-to-me challenge, The Flower Challenge. Therese from Lost In Paper is the Guest Designer and her card is so lovely I thought I'd give it a go. 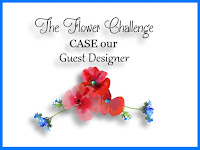 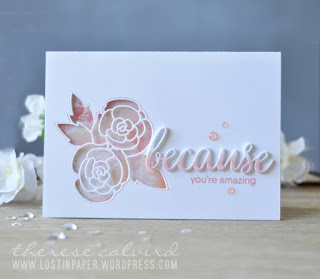 I was inspired by her colors and the raised sentiment. Mine is a similar but different: 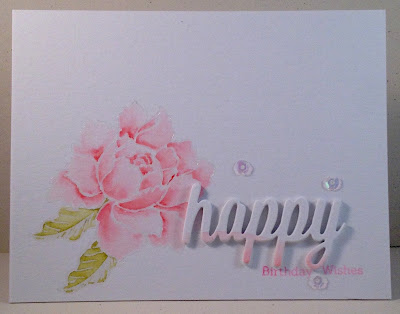 I used the Altenew Peony and heat embossed it before using my Zigs to watercolor. On a scrap of watercolor paper, I ran some pink color and cut out the 'happy' with an MFT die. I added the 'birthday wishes,' which are from two different Uniko sentiments. A few pretty sequins (thanks Ardyth) and done. That flower, in real life, is so pretty if I do say so myself. My daughter Cathy happened to see it laying on my desk, and fell in love with it. It will go into her box of cards at Christmas.

Next I thought I'd play along with the Essentials by Ellen Pin-sights Challenge. More watercoloring... 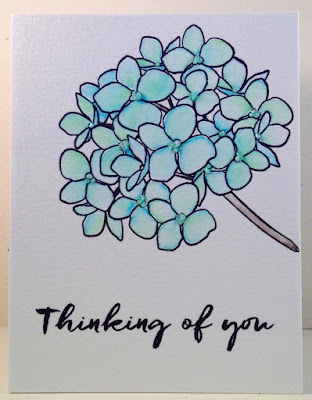 *sigh* I love this color scheme. Calming. Serene. And gorgeous. The image and sentiment were stamped while spending time at the Lake House. Thought it was time to pull it out and actually use it. My Zigs aqua was a bit too dark, so I used tons of water and added a bit of light green in to get a more aqua-y color. I think it worked pretty well. Added some Stickles and some glitter to the centers. Nothing fancy here. This will go to a friend whose dad passed last week. I'll stop now, and get to some commenting before starting dinner. As always...

Both cards are so beautiful Bev! Your pink Peony is so delicate and sweet and you are right, the colours of the aqua are serene!

So sorry for your friend's loss. And do you really need to put the water colors away? These are all beautiful!

I don't think you should put the watercolors away. These are STUNNING cards. I love the first one. That pink is so soft and pretty. I like the addition of the Stickles in the middle of the hydrangea flowers. You can never go wrong with a little sparkle!! Lovely cards Bev!

Beautiful cards, Bev! Each is stunning in its own right!

Both of these are beautiful Bev, that soft pink flower on your first card is so lovely and the aqua wash on the hydrangea is definitely calming and serene. A lovely sympathy card.

Beautiful watercolouring on both cards, Bev. The pink flower and pink-edged sentiment are so pretty together. And love the soft aqua hydrangea. xx

Oh, yum, Bevie, you have been hiding your watercoloring talent under a brush! That peony is utterly gorgeous and is a stunning CASE of Therese's card! Of course, the hydrangea in aqua is out of this world! I can't wait to see more of what you've been creating in that calming rut you've been in!! Love and hugs and miss you lots! Darnell xxoo

Oh no, don't put them away! These are stunning!

Two beautiful cards here Bev! great CASE of Therese's card too, that soft pretty water coloured flower looks amazing....no don't put away those watercolours! love the hydrangea card too, loving the aqua shades. Thank you so much for sharing with us over at 'The Flower Challenge' and we hope to see you again soon ;)hugs Viv DT xx

Wow Bev what a stunningcreation. Absolutely love how you used the Altenew flower stsmp, stunning.... Did I already say that. Well it is and then the second card another of my favourites. So beautifully done. Thsnk you so much for joining us at The Flower Challenge Aileen DT

These are beautiful, such amazing water colouring and I love all the pastels you used x

Both are beautiful but especially like the first the colours are sublime so delicate and the raised sentiment coloured at the edges is so pretty.

Gorgeous, Bev! Don't put them away! Your peony is painted to perfection and I love the pink on the die cut too. You captured the very color of that mood board with this aqua beauty!

This delicate, soft peony card is delightful! No wonder your daughter fell in love with it!
And your aqua hydrangea is soothing and lovely - perfect with your friend!
I wouldn't mind at all if you would continue to watercolor flowers because I enjoy looking at your beautiful results!

Two FABULOUS flowers, Bev!!!!! WOW, the first one is so soft and dreamy in the pretty pinks and the second in wonderful soft aquas - love the subtle touches of the light green!!! Both these cards are soooooo beautiful, I keep on going back for another look!!!!! Wonderful watercolouring on both, my friend!!!!
Have a great day!!!!
Hugz

I'm happy dancing just thinking of the Lake House, Bev ... and us all stamping out that gorgeous hydrangea ... you've made it sooooo lovely with your delicious aqua blend. Now, that peony ... oh my goodness, what a stunner ... your watercolouring truly is spectacular. A beautiful CASE. Can you please keep on with the watercolouring ... pretty please? Thank you! Miss you, my friend ... hugs & bisous, Anita :)

Your peony is gorgeous, Bev. So perfectly watercolored. I too love to do watercolor flowers. I love the variety of colors in the hydrangea, which is how they actually are. Another beauty.

A beautiful pair of cards for sure, your pink Peony is lovely in those soft water colors and the sentiment looks fabulous. Keep using your water coloring, it's perfectly obvious you love it.
Thank you for sharing with us at THE FLOWER CHALLENGE, hope to see you again next time.
Hugs,
Maria Rodriguez.DT

Hey there pal! We're back home from a lovely (but too quick) visit with Brady! Had a fabulous time - just wish she lived closer! Met Carol for coffee too - talked till our jaws hurt!

Two BEE-U-TI-FUL creations! You're a natural 'water color-er'. Seriously! Your blending is flawless - love the soft colors! Not that I want to pick a favorite, but if I HAD too, I'd pick the peony - IT IS STUNNING! Nice touch with a wee bit of color on the 'happy'.

No doubt about it....you rock water coloring in a BIG WAY!

I'm in love with your watercolored peony! It's what I strive to do when I watercolor. Love the depth and dimension!

Wow, wow, WOW Bev, your watercolouring skills are incredible!! I know you said you were going to have a break from water colouring for a while but don't leave it too long, I need to see more of these cards!! Its such a perfect CASE of Therese's card and its always wonderful to see you at The Flower Challenge!!!

Love your card Bev....
Thanks so much for playing along with The Flower Challenge.
xx Karen DT

Hi, Bev! So sorry I've been absent for too long. Hope you and your DH are doing well.

Both cards are simply gorgeous. Flowers always make me smile. I love the pretty colors, the water-coloring, and the fabulous CAS designs.

YAY, Bevie! Congrats on the well-deserved HM win at TFC for your gorgeous card! Hope you are feeling lots better! Miss you and love you! Hugs, Darnell