A First For Me

So remember I'd had a cold a couple of weeks ago? It seemed to be getting better, but something felt wrong in my ears. The left side wasn't too bad, the right side, however, felt really weird...like my brain was trying to give birth to a baseball through my ear canal. Went into the walk-in clinic and for the first time ever in my life I find that I have double ear infections. Isn't that something that babies and little kids get? Maybe I'm aging backwards! Yeah! That's the ticket! The antibiotics are working well, and I can actually hear again, lol! What a week. Think I'll pass on doing that again though. Took DH for his BIG doctor's appointment, and he was given a pretty clean bill of health. At least as far as the Neuro team was concerned. Thanks for your prayers on that. While he'll never shoot baskets again, or play tag with the little kids, he is making small strides toward his new normal health levels. Whew!

This morning I have a couple of cards to share. For the first card, I'm playing along at CASEing the DT at the Coffee Loving Cardmakers blog, and also at the CAS Mix Up Challenge. My second card is for Muse. 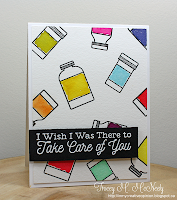 Let's have a little look-see: 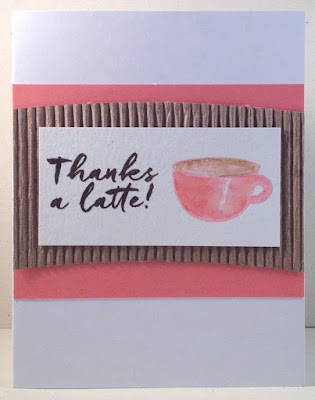 For my corrugated cardboard, I turned a Starbucks coffee sleeve inside out and popped it on a scrap of pinky-peachy cardstock. I used an EH set, which I stamped, and then watercolored the coffee cup with my Zigs. It looks prettier in real life...*sigh* 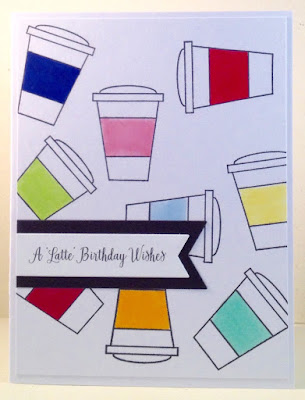 It's a pretty close CASE of Tracey's adorable card. I used the PTI coffee set on a panel and used Copics to color the sleeves, and added a computer generated sentiment. EZPZ lemon squeezy! And if I'm going to get anything else done today, I'd better run. As always....

I had my worst ear infection at age 28 - I was working on the 32nd floor at the time, and I cried in the elevator because of the pain! So glad you're feeling better! Love your coffee-ful take on this week's Muse - so glad you joined us!

GREAT cards......of course I AM a coffee drinker LOL!
Good to hear people are starting to feel better, it's been a horrible season for all kinds of yucky stuff .
Mine was all sinus related....uhg!
Have a great day.

Cute cards! Love the colours in the second card.

Your analogy about the baseball made me laugh. Glad your family is feeling better. Take care!

Goodness! So glad you are starting to feel better Bev. There has been so much sickness going around. And wonderful news on DH doctor visit! Love your two adorable cards...especially the soft feel of the coffee cup.

Oh goodness, you have been in the wars, hope next week is better and good to hear hubby is improving, lovely cards, love the use of the corrugated card x

I am sure you are getting younger every day but it's too bad that this fact gave you a double ear infection! Glad you are getting better and that your DH is doing quite well!
Your coffee-themed cards are fun! Great recycling of the coffee sleeve and the rainbow colors on the second card are cheerful and fun!
Take good care of yourself!
Hugs,
Susanne

That is so fabulous. Love it. Thank You for playing along with February CLC CASEing DT!

Oh Bev!! Double ear infection? Yuck!! I have not had one in a long time and I don't think that I want one!! I am glad that you are finally feeling better. Your cards are so pretty. Love the softness of the watercolor coffee cup against that texture of the corrugation. Looks cool. I also love your take on Tracy's card. I have that PTI set too and forgot about it. Might have to CASE your card!!!

My rarely sick husband had an ear infection last month - so glad you got it diagnosed and treated, Bev, definitely not something we usually see at our age. Also happy to hear your husband is getting positive health reports - yeah!

Your take on Tracey's card is just perfect!

Two great coffee lovin' cards, Bev! I love that you used a coffee sleeve for the first one and all the brightly colored sleeves on the second! Thanks so much for sharing this with us at CAS Mix Up!

A couple of great cards -- love your cardboard (lol)! So glad DH is doing well, now prayers for you and those ears!

Oooh, fabulous cards, Bev!
Glad to hear your husband is doing well! And hope you're back to 100% soon...ear infections are no fun, especially when you can't really hear! It's bad enough for me when I get water in my ear or the pressure changes...What?!!...lol
Take care, hugs

Bev I never had an ear infection as a child but had one in my 30's and it was horrible! I am so glad your antibiotics got you back on track! Also good news about John! Your Coffee Lovers CASE card is so pretty in pink, way to think outside the cup with the corrugated Starbucks cozy. Love that you used the PTI coffee cups for Muse, that it stills one of my favourite coffee sets to this day! Thank you so much for sharing with us at Muse this week!

Oy, Bevie, that sounds horrible and, no, I didn't realize adults could get ear infections, let alone doubles! You poor thing. I'm so glad you went to the clinic so you could get medicine to make them go away. And I'm so delighted to hear that prayers were answered and DH passed his exam!! You both must have been so thrilled and relieved! It certainly brought out your mojo! Your cards are totally perfect for the challenges!! Take care and stay well now! Love and hugs, Darnell xxoo

Glad to hear you are feeling better... pardon the pun lol. Love your fun designs, especially those bright fab cups!

Two wonderful cards, like a bit of coffee hmmmm? Love the use of corrugated card and the coffee cups like the pill bottles. So glad to hear your DH is doing well and this good news that the antibiotics are working. It would be nice to be able to hear again (though sometimes it comes in handy being deaf!!) Hugs aileen

Sorry to hear you were under the weather my friend!
You made 2 beautiful cards!
LOVE your take on the Muse. A Stunner!
take care!
♥

Well, you know I love them both! These are so fun and who doesn't love coffee cards?!

Oh, you had me LOL with your ear-infection story, Bev!!!!! Can you mail me some of those ageing backwards infection germs, please!!!! LOL!!!! Happy for you that it's better - sounds as if it was really terrible!!!! And wonderful news on hubby's positive health report!!!! Both your coffee cards are lovely!!!! Yeah for recycling the coffee sleeve and having it as a great bg strip for your pretty pink cup and the sentiment!!! And another cute coffee card ...I have to be off to switch on the kettle ...definitely coffee time over here, now!!!! Both sweet cards, my friend!!!!!
Have a great day!!!
Hugz

So glad to hear about better health for both DH and you! Love your cards! Great colors on both of them!

Lovely card, good choice of colours too. Hope all is well!
Thanks for joining us at CAS Mix Up!

Oh my goodness Bev, a double ear infection?!!! Sounds very painful! I do like the aging backwards though. lol Glad that the meds are working and you can hear again. Look at these fabulous card! I am loving both of them!! The coffee sleeve looks great on your first coffee card. Love the way you have colored your cup too. The second card is just so fun, bright and happy! I love it! So glad hubby got a good report, that is such awesome news and I am so happy for him!! Hugs, Brenda

Two fabulous cards, Bev! I love your no line coloring on the coffee mug, and your take on Tracey's Muse card is perfect!
I'm so glad you're starting to feel better, and that DH is also doing well :) My thoughts and prayers that it stays that way! Hugs, Barb

Hi Bev. Two fantastic coffee-themed cards! Love the sweet watercolour cup with the corrugated sleeve background. And your rainbow sleeves are so fun and bright. A very happy card! Thanks for sharing with us at CAS Mix Up!

Sorry to hear about your eye infection ... yikes, that must be very painful. Good that the antibiotics are helping to get things under control for you. Great news about your DH's check up. Hope things continue to go well for him (and you!). xx

Hope you're getting better and better everyday ! Fabulous cards ! What a great idea the corrugated cardboard as a background for your card ! And your take on Muse challenge is just fabulous ! thanks for sharing.
Izzy Scrap

D'you know that texture-y corrugated paper puts me in mind of cup cake wrappers, Bev, as well as coffee cup wrappers ... just the perfect accompaniment to your deliciously watercoloured liquid-gold filled cup! Sweet and colourful take on Tracey's Myse ... bright, vibrant and so fun ... just like you! Delighted you're on the mend, my friend ... and that John's news is good ... long may both continue! Prayers encore (of course!) ... hugs & bisous, Anita :)

So sorry about the ear infections, Bev, but I'm glad you're well enough to make a couple of great cards. I love the cardboard cup wrapper on the first card and the brightly colored coffee cups on the second.

Oh no, Miss Bev! I'm so sorry to hear you're so unwell. I hope you feel better very, very soon. It is wonderful to hear the good news about your hubby though.
And then there is the gorgeous visual inspiration on your blog again today. Both cards are just so lovely!

So glad you went to the clinic and are on the mend! Great news about your DH, praise the Lord! Wonderful cards, Bev! For some reason, I'm feeling thirsty now...

Great recycling of your coffee cup sleeve for the first card! And I love all the colours of the sleeves on the second one! Thanks for joining us at CAS Mix Up.

Your post cracked me up!!! "Aging backwards" is such a great idea but when you think about it we pretty much do that cuz we start in diapers...and likely will end in diapers!

Clever idea to use (re-use) the corrugated coffee cup sleeve - perfect for this card! The coral-ish color looks great with the kraft!

2nd card - fun colors, cool placement of the cups and a sweet sentiment! Love it!

Hope your ears are feeling better soon! "Giving birth to a baseball through my ear canal" darn near made me rupture a kidney!