Besides three new cards, I have something else brand spanking new in my craftroom today. Before I tell you what it is, I'll tell you how it came to be... So Tuesday, after I'd posted my latest, I was perusing FB. Saw that Silhouette had this update thingy, and that it was supposed to be uploaded by the 23rd of June, or I'm pretty sure that the world would end, or something equally catastrophic would happen. So I went to the site and began the process. I watched as it removed all the old Silhouette program files, and began the installation. Then...to my horror, it gave me an error message. The dreaded error message that I had hoped would wait... It read something like "Unable to proceed. Windows 7.1 or later necessary to complete reinstallation." Oh. My. Gosh! My poor sweet baby dinosaur was only running XP. And now I had no Silhouette files.... Only one solution. I went to Best Buy and bought me an iMac. So my poor little PC now sits, waiting for my computer geek to come and erase its hard drive, then it's off to Goodwill. Do I like my iMac? So far I do. Having worked with them at my former Museum job, and having an iPhone and iPad, it's not totally foreign territory for me. Just need to tweak a few things, and get used to some of the differences. I adore this giant screen! It's not the 27" Retinal display one, but it's that same size. And fast....blows my dearly departed PC all to bits! So that's what now taking up (less) space in here. Come on over and take a peek! I'll do some photos of my craft room once I get that credenza finished (once again it's too windy to paint...).

So. I really do have some cards to share today. Let's get to it, shall we?! First up is a card for the current one-layer challenge at Less Is More. With the theme of "Home" for us to work with. A dear friend and her family are on vacation and I thought it would be nice if they came home to some happy mail.

Now. My card is one layer, but...I did cut out the center panel and then replaced it, so technically it is still a one layer. However, if the DT decides that it doesn't qualify, then they should remove it. 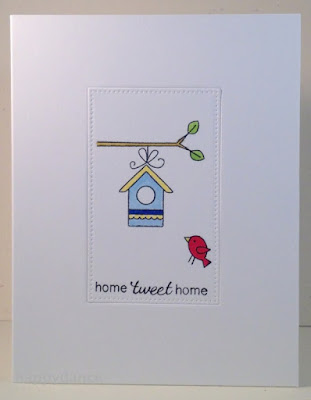 All stamps are from NN, and were stamped in Versafine black and colored with Copics. The die is MFT.

Next, is a card that I'll be putting into City Crafter Challenge, and we're to use a gold die cut. 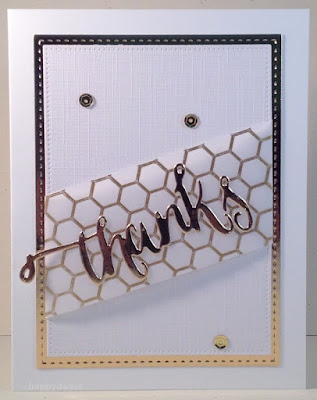 Definitely gold. Definitely gold die-cuts. The center white panel is some of that linen-like paper from the fabulous Miss Anita. Love it! And some SC punchinella vellum set on an angle. WPlus9 'thanks' die. MFT stitched rectangle die, and a smattering of gold sequins. Looks cool irl.

And lastly, a card for the Little Tangles sketch challenge. 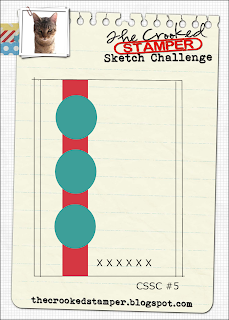 Here's my take on the sketch: 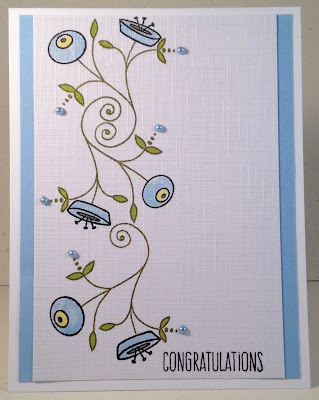 A smidgen liberal, but you can still see the sketch, I think. All N&T stamps colored with Copics. Some BoBunny pearls, and a bit of WoS, which, of course you can't see... More of that sweet linen paper, with a bit of blue cardstock going down either side. That's it...at least I think it is. My apologies if this post looks wonky. Still working on my iMac skills, but over time I'm sure I'll become proficient. Happy Dances everyone!

Pretty - love the blue flowers and as far as the 'house' card, I would say that the panel looks embossed rather than inlaid - you're so honest! lol! Also love the elegance of the gold. I had a bad afternoon of crafting today - everything I touched went sour. Hoping for better next time! lol!

Three great cards- - the house one looks like one layer to me! Enjoy your new iMac!

Oh wow! I can't get over how stunningly beautiful that gold foiled thank you card is. I could stare at it all day. ANd the simplicity of your first design is truly lovely. Congrats on your new baby!!!!! Have fun playing around with Mac!

Totally awesome, thanks for sharing with us at CCCB!

Yay, glad you were able to get a new computer Bev! I've never used a MAC computer must less an iMAC computer. lol But I hear how everyone loves them. I know you will have it humming like a pro in no time at all! Love, love, love all three of your cards. The bird house one is just so tweet...I'm mean sweet! lol I am loving how you kept it one layer, but changed it up by cutting out the center and placing it back in there-so smart! I love the honeycomb thanks, and the flower card is stunning and yes, I can definitely see the sketch in it. Hugs, Brenda

Funny, I was looking at Macs the other day too. I've always been a PC girl but like you, I've got some experience with a Mac and I've been using an iPhone and iPad for years so I think I could make the switch fairly easily. And after 4 years my PC is acting weird (as they usually do) and I wonder if I need to start thinking about a replacement before I lose everything! I hope to see pics of yours and that you'll share your experience with it! And as for the cards - another wonderfully eclectic showing of your varied stamping style. It's always inspiring to come here and see what you've been up to!

Love the cards, they are all just beautiful.

Your cards are stunning! Love your use of the gold!! My imac is my best friend ... I've been using it for years and just love it!! Thanks so much for playing along at CCCB!!

Oh I keep thinking about getting a Mac but haven't pulled the trigger...so happy it worked out for you! Love your trio of cards...the gold on gold...wow!

Not one thing about this post looks 'wonky', Bev! All good, clever, darling and lovely! Congrats on the iMac.
=] Michele

You will be happy dancing all the time with your new Mac! I love mine!( not new anymore) Oh, you made so many beautiful cards here today! Love the blue flowers and then the one with the gold word die....gorgeous!

Look at you go, Bevie! Most of us would have spent a week crying first and then acting, but you just get 'er done! Your three cards are all equally beautiful! It's wonderful to see you at LIM and City Crafters! I think you nailed all three of the challenges with these beauties!! Miss you! Hugs, Darnell

Yay for iMac :) Gorgeous cards - the home tweet home card is so sweet, love the gold diecut, but my favourite is the third one, brilliant interpretation of the sketch (and not liberal at all, in my view!) and lovely colour scheme.

All so pretty, Bev!!! The home one is a such a cute CAS creation!!!! The little bird is the sweetest thing and I love his cute bird house and the two leaves on the branch!!
The white and gold one is soooo beautiful and has also got a lovely CAS look!!!
Love the clever stamping and the little pearls on the third one!!!!
Have a great weekend!!!!

Bev, these are all fabulous. Your gold cards is so classy and I love the blue tones in your third card. And as for your inlaid die, if you look at our guidelines you will see that an addendum was added fairly recently and inlaid dies are allowed for one layer cards - woohoo! And what a fab entry, love the clean lines and simple design.
Thanks for sharing with us.
Anita x
Less is More

Enjoy your new technology!
Your little new home card is beautiful!
Thanks so much
Chrissie
"Less is More"

That gold one - swoon! Really love the sketch-card too, and your technique with cutting out the panel and replacing it with another to add a little extra is just perfect! I've been meaning to try that myself, but still haven't gotten round to it! Maybe for my next project!
Hugs,
Sofia

Three fabulous cards my dear friend...love them all. Congrats on your new computer too! Wishing you a fabulous and wonderful weekend!

Absolutely stunning cards Bev, and such beautiful colours and layouts on all of them. Good luck with your new toy but I must stay you don't seem fazed!
Sorry I didn't get to you before the challenge closed but thanks so much for playing along and sharing.
Sarah
Less is More

Where to start with this marvellous trio, Bev ... ok, that sweet bird house ... it's just adorable and so cute in all that glorious white space! Gorgeous gold and vellum ... elegant and stylish! The last one ... oh my, I LOVE it ... adore those Scandinavian blooms, so perfectly and softly coloured ... a stunning take on the sketch ... brilliant, brilliant, brillliant! WWCD, my friend! Hugs & Bisous, Anita :)

Oh, and you make that linen card stock shine ... every single time!

Congratulations on your new baby, Bev. It's always difficult to figure out new technology it looks like you have it down. Love your little bird card and the gold one is stunning. Those little flowered vines, too. Three fabulous cards!

Fabulous! Thank you for joining CCCB this week!
Samra DT

Bev, what beautiful cards you've created.
The first one is just so adorably SWEET!
Love the design.

Um WOW!! I have been away and am just catching up on some of my favorite blogs. I LOVE all these cards. The first one is so pretty and I am going to have to try cutting out a panel and then tucking it back in once I have colored it. Or was it vice versa? I will have to look again. I love the effect, though. My favorite is the second card with the GOLD!! You ROCKED this challenge. I am adoring gold as of late and even was dreaming about making a card with it over vacation. I love going away but miss my craft room-how sad is that!! Really lovely designs!!

BEAUTIFUL creations! I love the takes on all of them. But the last one is absolutely delightful...simply because I just love that soft blue! I love how you get speedy on the "Technology Highway" (this term is obsolete now, too). Way to go on getting a new iMac!

Pretty card, Bev. Thanks for playing along at Little Tangles and hope to see you again.

Wonderful cards! Love the gold on the second and your placement of those flowers on the last!

Welcome to the new iMac! Just hearing about it has piqued my interest, so perhaps...down the road...Your trio of cards is another bout of divine! Your one-layed (yep...it is, in my books) bird house is darling and your N&T flowers are not only pretty, but such a brilliant take on the sketch. The gold one though has truly set my heart a pitter-pattering! Exquisite (or, as my niece would say, 'squizet') in every way. Smitten by that stunning beauty!
Hugs~c

I need to buy a new thesaurus! Lovely, gorgeous, sweet, pretty - all super words to describe your creations but somehow they still feel inadequate. Each card is so amazing!