Another one of our granddaughters turns 16 this month. That's two this year.... Lizzy is already DRIVING, and by this time next week, I expect Haylee to have her license too. Where has that time gone???? Haylee's little brother is the last of the first group of 10 grandkids. Then there's a six year gap, and the next 10 little ones are all bunched together. I guess I won't feel too old until the latest little fella, Sean, turns 16. But he's got 15 years 10 months to go before that happens! It's been fun watching them all grow. Eleven girls and nine boys. Hmmmmm...someone in our family needs to have another couple of boys to even things up! It's a long shot, but maybe our bachelor son Joe will find Ms. Right and take care of that (hahahahahahahaha!).

I made a card for Haylee, based on Vicki Dutcher's vivid card over at Muse. It's right up her alley, as I'm sure like most teens, she texts, tweets, instagrams, fbs, and all those other things. So she'll 'get' this card, and might even be a little surprised that grandma knows what # means. Maybe I'm not such an old fogy after all! Here's the card Vicki made: 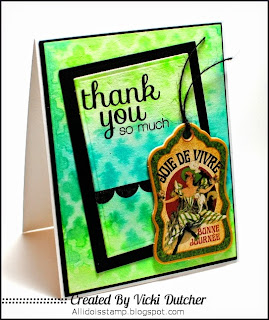 And this is my interpretation: 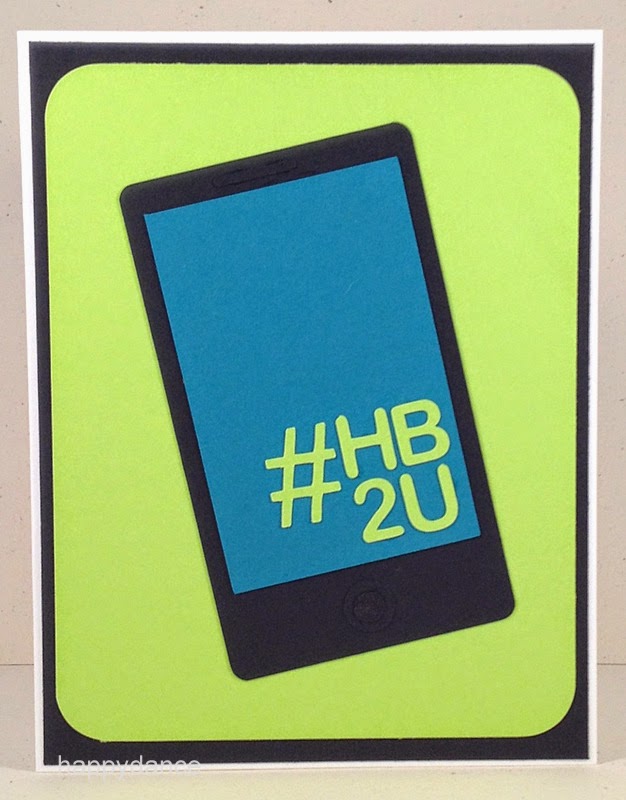 I know, I know...that green is awfully bright against the blue and black. But these colors happen to be Haylee's favorites, they are pretty close the colors Vicki used, and I had to go with them. I actually followed Vicki's layout pretty closely, just went a little more CAS with my card. Except for the Neenah white base, everything is from the old scrap box. I cut everything out with my Silhouette Cameo. No dimension really, as I need to mail this. No stamps, either. Die cut the # and letters using the Ariel Rounded Bold font on my Silhouette. Some rounded corners, and done. Have a great weekend everyone.
Posted by Happy Dance at 8:47 AM

Great card!! My grandchildren are getting OLD too! LOL how come I feel the same age while they are changing by the minute! : )

Have a great weekend.

Oh this is such a fun card. Perfect for a sweet 16! My family has almost all boys (I'm the only girl out of 9 grandchildren on my dad's side). This generation it has reversed...between my cousins and me...15 grandchildren and I have 4 out of the 5 boys. The rest are all girls. Funny how it all works out!

What a perfectly wonderful teen card - they can so relate! Thanks for joining in at Muse!

So fun and just too cute and I am sure your granddaughter will love it. And the colors are so fun and so trendy too.

Umm, I'm pretty sure my grandma never sent me something this trendy when I turned 16 ... you're awesome, Bev!! She will absolutely love it!

You are definitely one cool & hip grandma! These colors rock...and so do you! Great take on Vicki's card!

Such a perfect card for a 16 year old! Love it! Simple and to the point!

Love your clean take on the Muse! So glad you joined us this week!

Love your take on the Muse challenge! What a perfect card for a teenager!

Wow, Bev, these are such fantastic colours ... not surprising they're Haylee's faves! Such a fun and perfect card for her 16th ... bet she knows already Grandma's hip and trendy! Hugs, Anita :)

Now you can tell Haylee her card's award winning, Bev (even more hip and trendy Grandma!) ... you won an HM at Muse ... congratulations, dear friend! Anita :)

Awesome card, hip-and-trendy Grandma Bev (congrats on the HM...wooo hooooo!!) - and how sweet are you to make this incredibly 'personalized' gift for your sweet 16 grand-daughter! I know she loves it, as do I! Kids do grow up far too fast; Ms T is already 4 and Mr. C is 2! They need to slow down! You still have plenty of 'little ones' to enjoy - and I know you relish every second with them. As for your comment about your bachelor son...Oh, Bev!! You are hilarious! For the record: my 'bachelor' uncle met and married his wife when he was in mid-40s. She was younger - significantly - but a perfect match. They had two kids...so, you see, miracles can happen! Fingers crossed Ms. Right comes along! Hugs~c