I know I've mentioned this before, but I don't work with too many purples. That's our daughter, Cathy's color. Her front door is purple. She has more than one purple purse. She painted her dining room the most delicious purple...well, you get the idea. Not that I don't like the color, I just don't work with it too much; unless I'm making something for Cathy!

So why am I talking about purple? Because monochromatic purple is the theme over at The Card Concept this time. When I first saw the theme, I figured that, oh well, I'll just miss this one. But I really wanted to play!!!! It has taken me this long to come up with something I actually liked but I kept at it. Idea after idea. Rip after rip. Toss after toss. My recycle bin is chock full of purple bits, lol! I stuck with it, however and came up with a little something that I would classify as 'Clean & Graphic.' 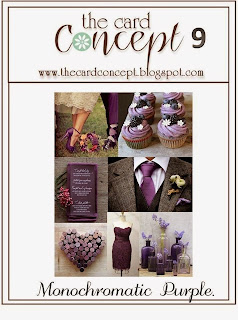 And here's my study in purple: 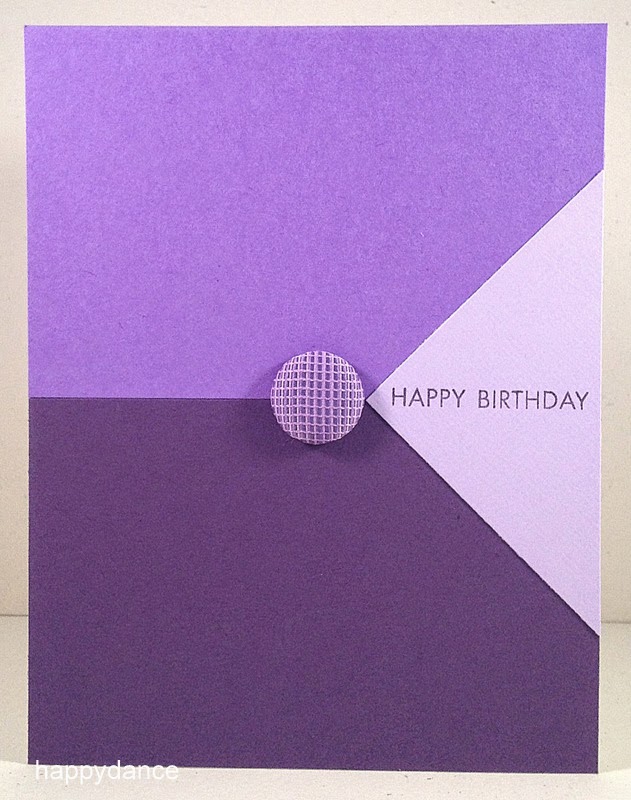 Had to dig for purple scraps. But found three pieces just the right size and shades. Trimmed and glued to a Neenah white base, added a HA sentiment with some Elegant Eggplant ink by SU and one brad whose poor little leggies were ripped off, bwahahahahaha! IRL, it looks cooler. And that's it for me today. Happy dances everyone.

Purple perfection, Bev!! You've created graphic loveliness in tackling this challenge! Cathy will love this, as do I!!
Hugs~c

For someone who doesn't work with purple much, Bev, you've come up with a stunner here! Clean, crisp, graphic and with just the perfect touch of dimension from the ... ahem... 'adjusted' brad! Very, very cool! Anita :)

This is such a fabulous, clean and graphic card, I just LOVE what you've done with purple here!!!

I tried something like this for this challenge, but it didn't look anywhere near this good! LOVE this! So glad you joined us at the Card Concept!

Wow for someone who doesnt like purple you have created a brilliant card. Love the total effect. The leggless brad is the perfect finish to this card.

It may have taken you a while but it was worth it. This purple-icious card is stunning.

Wow !! I could have never imagine a masculine card with this color, superb :) absolute perfection.

I'm such a purple fan I once painted a house purple, but I rarely use it papercrafting - you really nailed this challenge with a perfectly balanced design!

This is perfect! Why a neat idea Bev! Such a great design . I like purple.,

Now that is just spectacular!!! What a fabulous graphic design!! Love it! Thanks so much for joining us at The Card Concept! :)

ADORE this BEV really a KNOCK OUT!!!

Serious stunner. I love this- and you've made purple look cool!

Oh my goodness...this is just fabulous my friend. I love your design and that button, wow!

It's funny that you don't like purple because you do such pretty work with it. :) Love the shades, the design and the simplicity of your card. :)

You're a winner! You AND your card, I mean. Congrats.