Sorry. I actually meant to post at least one of these cards yesterday, but after waking up with a migraine (hate to say/write that word out loud), pretty much the whole day was shot. What that means is you're getting three cards today. So grab your beverage of choice, sit back, and peruse at your leisure. I have to go on a bit of a tangent here... (how unusual, lol). About 15 years ago, DH was giving a paper at a history conference in the Twin Cities. We'd gone up the day before and stayed over night. In the morning before his conference began we went down to the restaurant in the hotel for breakfast. The hostess seated us and as we were looking over the menu, the waitress arrived and asked us if we'd "...been beveraged yet." WHAT???? Since when did beverage (a noun) become a VERB??? We've obviously never forgotten that small incident, and have been joking about it between ourselves ever since. Okay...no more tangent and onto today's cards.

First up will be a little card for the Muse challenge. The incredible Gillian Ross is up as Guest Designer this week and has created a CAS masterpiece. As soon as I saw this, I knew I had to create something. 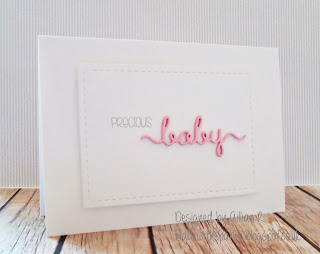 It's the kind of card, that when you see it, you smack your forehead and wonder "why didn't I think of that???!!!" This is my take on this gorgeous card: 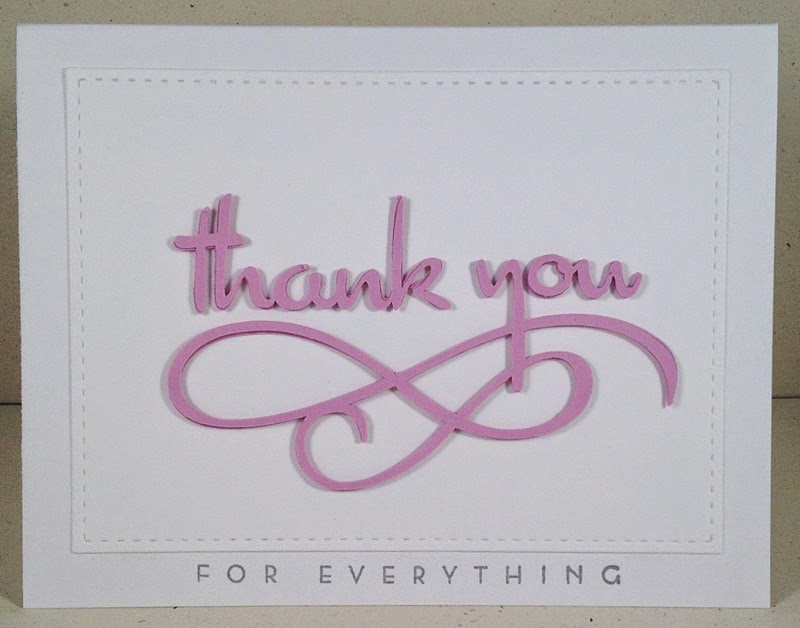 I used a cooler pink simply because the cardstock scrap box is getting out of control again, and it happened to be available. Didn't want to cut a warmer piece and add to the box. But I like this pink trending on lavender color. I cut four 'thank you's' out with my Cameo, glued them together, then popped them onto a stitched die cut from MME, (love that set, btw). The rest of the sentiment was inked up in Smoke ink from MME using a NBUS set from PTI; Wet Paint. All the white cardstock is Neenah. Thanks, Gillian for the awesome inspiration!

Next up, is a one layer card for CASology. But how to use this week's Cue Card?...Hmmmm... A little ping pinged, and in about 10 minutes, the card practically put itself together! EZPZ. 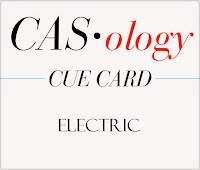 I love the simplicity of this card. It's not the world's greatest, but there's just something about it that trips my trigger...or should I say, trips my switch?! 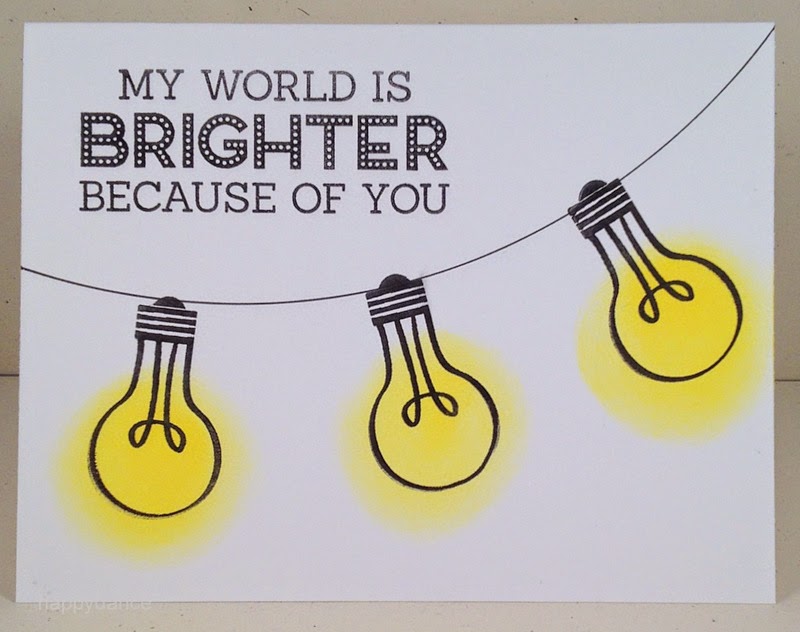 See what I mean about EZPZ? One stamp from Neat & Tangled, the bulb, and one from MME, the sentiment. A little SU black ink, and some Color Box Canary yellow and that almost does it. I used a dinner plate to help trace the line that the lights are strung onto. The base is Neenah white. Done and done.

And before I lose your interest (and I promise to be done in a minute), just one more card. This one's for the bright and colorful challenge over at Fusion. I did a pretty decent job of fusing the both the photo and the sketch. Check out their photo: 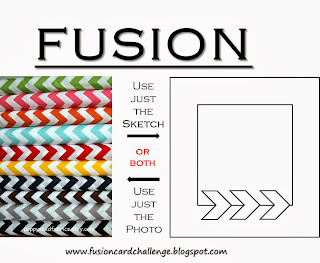 Doesn't that just make you smile?! And here's my take: 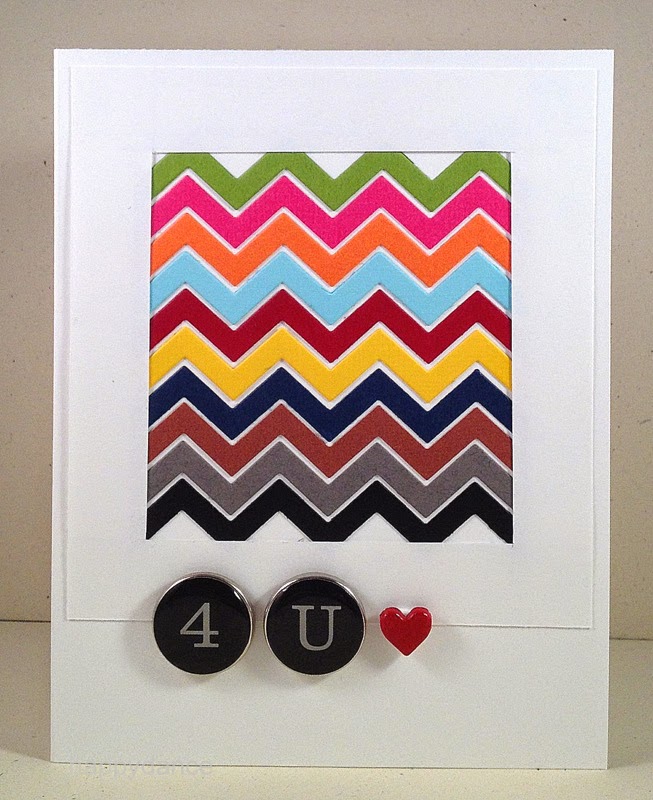 Since we've got overcast skies again, with MORE rain predicted, the colors in the chevrons just didn't photograph well. No matter what other lights I brought in, this is the best I could do. Sorry. Once again, I delved into my cardstock scrap box, and found bits and bobs to use up. A Neenah white base and frame and some brads whose legs I brutally ripped off (did you hear the screaming?). The "4 U" are both from Crate Paper, and the little heart was discovered on an archaeological dig through my stash; yes, it is very ancient! And as promised, done. Happy dances everyone!

And that's a hat trick, my friend! 3 fab cards. Love the pretty die for your Muse card and your glowing lightblubs. Your fusion card is punchy and fun, too! So glad you joined us at Muse and CASology!

Bev you are on fire today, three fantastic cards! The light bulbs glow perfectly. LOVE the chevrons, so vibrant! Thank you so much for sharing with us at CASology!

Three wonderful designs here! Your fusion card is a perfect 'fusion' of the photo and sketch! love the bright framed chevrons and the buttons sentiment! (hope your migraine is better!)

Glad you are feeling better today and were able to post those three cards, one more fabulous than the the other! Great takes on the challenges!

Have you been beveraged yet? What the heck?! I would still be laughing about that too Barb. Love your trio of cards and it is impossible to pick a favorite. The "scripty" font on the first one is jaw dropping! Thanks so much for playing with us at Fusion!

Score! You made 3 great cards, Bev. The thank you with it's swirls in the on trend orchid is lovely. The light bulbs look like they're actually glowing and the chevrons are a great fusion for that challenge.

Wow- these are all amazing! You've obviously got mojo and mojo to spare but the looks of it. Being beveraged sounds a little like inebriated!! Glad you weren't that either. I shall be telling my kids this tale!! x

I swear your head compensates for giving you pain but making you super creative after an episode! These are all outstanding, Bevie! I love them all, but that last one knocked the Fusion challenge out of the ballpark! SO a winner! Have a great migraine-free weekend! Hugs, Darnell

(And if you don't like people messing with words, my blog posts must make you nuts!! Eeek.)

Oh wow Bev - are you on a roll! I love all of these cards and can't believe how you did most of them with scraps!!!!
Perhaps I need a migraine to push start my mojo.
Have a great weekend.
Hugs
Carol x

I was reading your post and laughing just as the sun came out ... and this thought popped into my head ... you and sunshine ... what a perfect match! Each of your cards on it's own in a post would be awesome, Bev ... three in one post is multi-awesome (more than triple-awesome due to synergy!). I'm calling winner on all three ... delicious pink showcased word, sunny bulbs and cool chevrons! Still giggling ... just off to be beveraged!! Anita :)

All three of these cards are awesome, Bev! Love the colorful chevrons, the fun light bulbs and the soft pink thank you!

Ok Bev...from the looks of your trio of amazing cards, you would never know you had even a smidge of one of those things you get (don't want to mention that word on your blog). Each one is just fabulous, amazing and perfect! I love them all. But your light bulb card is my favorite of the bunch. You are just so creative. Enjoy your weekend!

Bev, this post is quite entertaining. First of all, I've never heard that phrase before (sorry, beverage is not a verb, no matter what anyone says!). I adore all of your cards and could read on of there were more! I LOVE the light bulbs and the accompanying sentiment...perfect for the cue at CASology this week! So glad you played along!

love all your cards! The lightbulbs are brilliant! Your fusion card is so great, love the chevrons, they look die cut and your flair is awesome! Thanks for joining us at Fusion!

All the cards are fabulous, but that pink thank you is gorgeous. I may have to get that cut file.

Oh my goodness what a treat !! I love all ur cards, stunner after stunner. In the fusion card love the bright colors and the way you represented the sentiment. Thank you for sharing with Fusion !

So have *you* been beveraged yet? lol Oh dear!! As for your cards, WOW! All three are so different yet each so wonderful but I must say that I *love* that 'thank you' card. It is so pretty and elegant and simple. It just works. Hope the YKW's leave you in peace, Bev!

Knock-out-of-the-park, home run cards, each one, Bev! Sorry to hear about "those that shall not be named" visiting you, and the creativity you've showcased, in spite of them, is beyond marvelous! Your thank you card is lovely pink; your light bulbs electrically vibrant, and your chevrons (especially from me, the queen of chevron-challenged) is eye-catching wonderful! Love all three immensely!! I'm off to grab a coffee; important to be beveraged at work, if anything is to be done! You make me smile - such a delight and gem you are!! Hugs~c

ALL your cards are extra fabulous Bev! Those chevrons rock, perfect shiny light globes and the elegance of that pink font popping on the white... WOW!

"Beveraged" ??? So if I worked in a bakery would I ask the customer if they've been "bunned" yet...

Sweet, sweet creations. Baby card is truly AH-MA-ZING! I love the purple/pink tint of the paper! I will definitely be searching out this 'thank you' sentiment!

And yes, my world is definitely brighter because of you dear friend! Awesome 'glow'! Consider the trigger tripped!

Oh what a fun post, Bev! You're light bulb card may have been short on time, but it's definitely not short on its appeal! Wonderfully graphic card. And your chevrons all framed up are just so cheery. I'm so glad you entered that one into the Fusion Challenge!

Smitten with those colorful bright chevrons and sweet sentiment!

I am thrilled to be popping back here to congratulate you on the HM recognition for your card, Bevie!! Well-deserved!! Hugs, Darnell