Not because I want to convert anyone into being a "cheesehead", but rather, because my darling granddaughter Melissa will be playing drums on the "Tundra Line" today. She was willing to put on multiple multiple layers and brave the below zero temperatures to play for the Packers. The last time she played for a Monday night game, she made it on the Jumbotron as they went to commercial, and I have a photo from her Uncle Christian who was fast enough to snap a shot of the TV screen with his iphone. So watch for a petite blond slammin' the snare drum...or the shortest, most padded drummer... Her mother made her look up signs of frostbite and other bitter cold weather dangers before she left this morning or there was no getting out of the house! Gotta love my daughter; she's such a good mommy.

I got up early this morning, while it was still "warm" out, and did the weekly grocery shopping before church. There is no way I'm taking DH out for something as trivial as that when it's supposed to be so cold. After church, I put a nice beef roast in the crock pot, and so I'm all set for a day of football (well, watching for Melissa) and crafting! Yippee! And hopefully, all day tomorrow too.


You've all heard, I'm sure, that there's a new Fusion challenge. When it first went up last year, I enjoyed playing whenever I could. Using a sketch or an inspirational photo, or both really appealed to me. I was sad to hear that they were shutting down. Then things changed, and they're back! So naturally, I had to play along. Very cool inspiration photo, and an interesting sketch, but no pings for me...dagnabbit!! Rather than do nothing, I examined the photo scrupulously and there it was, my first ping. Look at the duvet. White. Slender orange border. Right up my alley. Then things fell into place. Including some heat embossing (be proud Sharon and Ardyth), which isn't my favorite thing to do. 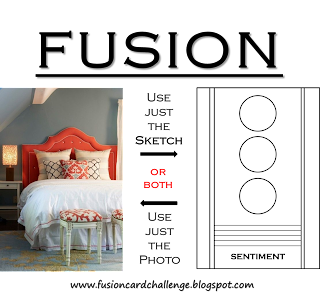 This is the fusion of both sides that I saw: 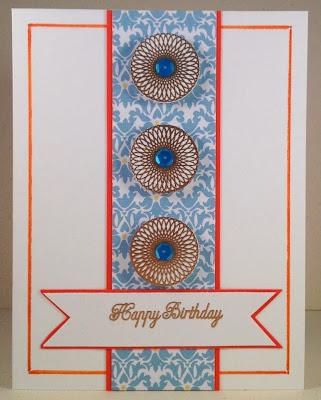 I used an SU orange marker on my white Neenah card base. The rest of the papers are from my scrapbox, and the dp is an MME scrap. I heat embossed some 'spirograph' like circles from Maya Road using Ranger ink and powder. The sentiment is from PTI, and three sequins that look darker in this photo than they do in real life. The circles are popped up, but you can't really tell in the photo. And I'm happy with this.
If you live in an area that's about to get slammed with this bitter cold weather, stay safe and warm. I'll be thinking of you all. Warm and happy dances everyone.

Well, that was definitely a fab ping, Bev ... wonderful colours and such an elegant look ... rather like pieces of intricate jewellery in a damask lined box ... beautiful! Enjoy watching out for Melissa and stay cosy warm, my friend! Hugs Anita :)

Beautiful card, Bev! Don't you love a good ping!! I've been waiting for mine on this challenge as well - but nothing yet :(
So exciting for you and your sweet Melissa!! Glad Mom is making sure she is bundled up...brrrrrr - I can't even imagine!

Go Pack Go! We were cheering for the Bengals...and that was a beyond disappointing few hours! I love your stamping Bev. Gorgeous take on the sketch and colors. So glad you could play with us at Fusion!

When I first saw your card, I thought those were fancy buttons that you put on it. You did a great job with the heat embossing. Well, with the whole card. I don't envy any of the players or the band having to be out in that frigid weather, but now that you've clued us in, I will definitely look for your granddaughter - a girl after my own heart since I played drums, too (back in the dark ages).

Shazambam, I think you had a MAJOR ping, Bevie! This is a really crisp and gorgeous take on the challenge!!

We are in a unique position with regard to the game today. We grew to have a lot of Wisconsin loyalty from when Dan lived there, but, of course, we have to be loyal to our local team, too! So, as usual, I'm firmly sitting on the fence and rooting for them both! I don't care who wins, as long as it's a good game. And now I will have another reason to watch! I will keep my eyes peeled for the adorable padded Melissa!! Hugs, Darnell

So glad you played along with the first Fusion challenge of 2014...love the clean lines on your card, the bright contrast of the orange and white with the beautiful gems. Well done!

Your granddaughter is brave indeed to be out in those frigid temperatures! That's dedication, for sure! I love how the thin orange line on the comforter inspired your card and lead to this beauty with its pops of color and detail.

Gorgeous medallions Bev! So glad you joined in the fun @ FUSION - hope to see you again soon :)

Bev...fabulous card and I love your use of orange, such an amazing color if you want my opinion. How fun that you were able to pull your supplies from your scrapbox, you must have a wonderful scrapbox!!!! Now for the football game, I am not a football fan at all, baseball is my game but I have to be honest with you, I was rooting for your team, green is my favorite color so I really had no choice, love my logic??? Sorry that they lost too, very sad here. How fun that your Melissa was part of the festivities despite the cold...what a fabulous memory!

BEV!!! The embossing ASTOUNDING.. I thought they were real Jewels! The colors you chose are like a sunset with inlaid jewels amidst a blue sky. I LOVE what I see in this card! Thanks for popping by and saying hello to me too!

I loved FUSION Too. I loved that I could think about it for a week and still play, maybe linking with another challenge, or not. Sooooo GLAD it's back! --Oh and I am on the DT?! I fell over. LOL.

LOVE seeing you in the FUSION Gallery, and you know you are very welcome ANYTIME Bev!

You always sound like you have so much fun! Bet your granddaughter looked gorgeous. I really love your card- I'd never have thought of using orange with the blue but it works so well! I shall tuck that colour combo away in my head- thanks!! x

Read your post...sent tingles down my spine! Yesterday when I was studying the photo the thin organe stripe is EXACTLY what caught my eye!

WOW - your borders are all soooo PERFECT!!! Love the pretty blue brocade DP and the PERFECTLY embossed spirograph circles (I still have the original Spirograph set in the original box...might have to pull it out of storage!). Awesome card Bev!

Bev, this is great! I love how you've examined the inspiration photo and come up with something that is perfect, and yet not obvious! Beautiful! Thanks for joining us at Fusion! Did you catch Melissa on the tv? Did she manage to avoid the frostbite? I certainly hope so!

Really wonderful fusion that ended up going on, Bev! So glad you kept at it. And I wish I would have seen your post earlier. We were watching that game (Bears fans, of course) and I could have been looking for your granddaughter. Hope she was able to stay warm!!

Beautiful card and I love the the sequins in the middle of the cirles. Thanks for playing along with us in the Fusion card challenge and hope to see you again.

Did she make the TV? I watched the game but hadn't read your post. I'm sorry she didn't get the thrill of a win to warm her up!