Are you a creature of habit? I find that as I get older, I tend to like the things I like, and tend to stick with them. With cardmaking, I like my cards 4.25 x 5.5, opening from the right side. My brain likes it that way. Predictability. It knows exactly what to do. Even with something as simple as a card. But every now and then, I like to try to get my brain to see things differently. To go out on a limb. Try something out of the ordinary. Even if it's just a little bit outside my normal. And even when it's an accident. You'll see exactly what I mean in a minute...

Playing along with CASology today. I LOVE CASology. If memory serves, and I'm too lazy to check for certain, the first Cue Card they had was "sun." Right before I was leaving to visit family 'up north', I discovered this new challenge blog was about to start up, and then part of me didn't want to go. But I did, and heavens to Betsy, wouldn't you just know that my sister actually had a computer AND the internet!!! (being sassy here...) CASology is always interesting, and has a great DT; I play as often as I can. This week, the Cue Card is "dot". Had a ping, but it didn't translate well to paper. That one's in the recycle bin. Another ping ponged around my brain. This time is almost worked... With a little tweaking, it became something sweet. At least, I think it's sweet, and am hoping someone else will think so too! (Most likely one of the little grandbabes) On my desk was a 3x3 scrap of white cardstock. And a bunch of die cut hearts from the "oh-pooh-this-looks-like-doo-doo-card". Two different sized hearts were laying on that scrap, overlapping each other. That's when the ping ponged (can you tell I'm entertaining my own darn self with that phrase?, sorry). Anyway... after using ONE stamp from Fresh Cut Florals and using a variety of inks around the two hearts, I came up with this card. Only it didn't look right. Ardyth makes square cards, and I thought, "hey, her cards always look great, so I'm giving this a shot!" Hence a bitty bit out of my comfort zone. It measures 3.75 x 3.75, and the fold is on the top. 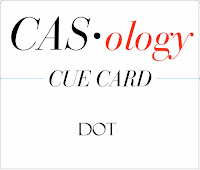 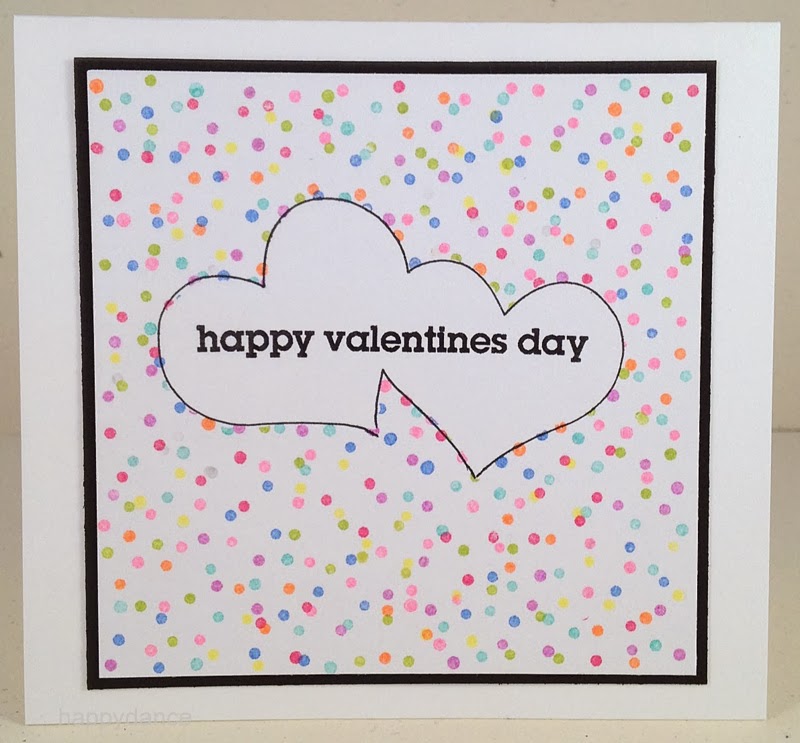 Another Neenah white base, only smaller than my normal sized cards. A scrap of black to frame the dotty panel, and a sentiment stamp from Avocado Arts. I traced around the heart masks with an AC pen. EZPZ, though cleaning off that itty bitty stamp between ink-ups was a pain! And now I'll stop. Happy dances everyone.

Throw up the confetti and celebrate your sweet card! That's what it looks like to me, confetti. And you stamped it so well, with the colors and all. I open my cards from different directions but it's always A2. I'm not into extra postage and making envelopes. ;)

This is truly sweet - love the colours and the way you made your own mask for this card! Thanks for joining us at CASology this week!

You've brightened my evening no end with your 'pooh', 'doo-doo' and 'ponging' my friend ... I'm still controlling the giggles! Your card is such a delight ... teeny dots in sweet colours surrounding those sweet hearts ... completely charming ... and bound to be loved by whichever lucky small person receives it! Hugs, Anita:)

Bev this is so sweet love your dotty background, what a labour of love! Thank you so much for joining us this week at CASology!

Way to challenge your inner Ardyth!! I can't believe you stamped all that!! (well, obviously I can believe it, you have a photo of it after all, but you know what I mean.) Gorgeous!

Ok blogger just got me!! I was going to say...well ping pong!!! This card is so sweet! You know what?!! I'm just like you - I stick to the same sized cards all.the.time! The only way I mix it up is by switching it from portrait to landscape! A square card is just a crazy stretch for me - so you are not alone!!

Wow! Your card is fabulous with lots of little dots! Love the way you traced around the heart. Thanks for playing with us at CASology. May-DT

Bev, now this is what I call a party on a card! So festive and it really does look like you tossed some confetti in the air and it all landed on your card. so fun!

Bev, way to take a walk on the wild side...a square card that opens from the bottom! Way to GO! (And I was quite entertained by your pinging and ponging, too!) I love this card, so colorful and dotty and fun, yet CAS! I, too, remember that first CASology cue and how excited I was to play along. Here we are, many challenges later, and it is still so wonderful to have you playing along! Thanks for joining us once again at CASology!

Ping! This is perfect...I love all those polka dots...and the rainbow of colors is so happy!

Hey, I had several episodes of "oh-pooh-this-looks-like-doo-doo" card-making experiences yesterday, however, nothing landed on the table anywhere near as wonderful as your overlapping hearts! The only pings I heard were the balled up pieces of paper being ponged (a la basketball style) in the recycle bin. Sighh..Your card: absolutely darling! Welcome to one of my favourite card sizes: minis!! LOVE the minis - and based on what you've showcased here, they look mighty good on you, too! More minis, please - you can do it! Hugs~c

Not only is your card fabulous, but your post has entertained every one of your followers! You're crazy girl!

Did you count the dots? They look fabulous but aren't your eyes sore? Totally admiring your perseverance, but well worth the effort because this is fabulous!

Brave & awesome job tracing around the hearts, especially considering what could be at risk should the pen wobble...as in the background paper!

Wasn't "dare to be square" something we said back in the 60's?

What a sweet, dotty card and i Love all those colours together. I know what you mean about getting stuck on one size of card making too and you have inspired me to try something different. Hope the ping keeps ponging!!
Hugs
Carol x