I've been away. Not by choice either...And not "away" away; migraine away. And company's coming, so I've been trying to catch up with getting ready for that as well. Oldest son, dear dil, and little Kelly are coming in from Phoenix this afternoon for a bit over a week. Very excited, but those darn y.k.w. had me down for five days and I couldn't shake them until yesterday which turned into the mad cleaning frenzy. You know exactly what I'm talking about too....Have missed my little blog and all you wonderful bloggy friends out there.

My sister-in-law, Marilyn, had surgery yesterday with hopes that the main tumor will be gone, and then when her strength is back in a few days she'll have more chemo to shrink tumors elsewhere. I made a little card for her with some new stamps. Had to get that finished - she needs to know we're here for her. 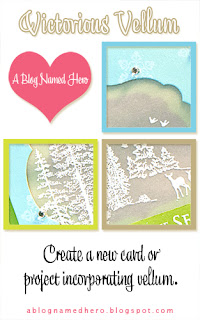 I might be too busy playing with 4 year old Kelly to craft, but we'll see what we all end up doing while they're here! She's a hoot. Hates having her hair brushed and doesn't eat much...Grandma can get her to do both, much to mommy and daddy's amazement! It's that grandma thing! Now, my card: 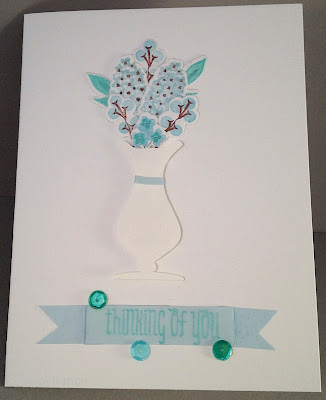 For some reason, my photo just wouldn't cooperate...a bit washed out, and looks really crooked, which it really isn't...someday, I'm getting a really, really good Nikon again.

I used my brand spankin' new WPlus9 Freshly Cut Florals stamps and dies with some Colorbox and Studio G inks. It's fairly monochromatic, at least in my world. There's a scrap of vellum around the neck of the vase and the sentiment panel is also vellum. I cut the vase with my Cammie (as Geri G. calls hers...), and used some N&T sequins. The one looks really green in this darn photo, but it's not!!! Gotta run, lots of last minute touches before heading to the airport. Happy dances everyone.

So glad you're feeling better in time for a fun weekend! Love this pretty, fresh card - so clean! And photography is driving me crazy lately, too - Tracey and I had a good chat about it yesterday while we were trapped in the car together! (definitely not complaining about the company, just the length of time we were there!)

Sounds like you're in for a most wonderful visit! Encouraging Kelly's creativity to bloom is awesome, as is your "grandma's magic." Glad the ykw's are gone. Your card is fabulous; perfect for your sister-in-law, who will love its prettiness and thoughtfulness! You've inspired me to try the 'monochromatic' challenge. Enjoy the visit; treasured memories await!! Hugs, c

Isn't it frustrating when photo's just will not co operate. I'm so happy after a couple of years of debating I just upgraded to a Nikon DSLR, now I just need to work out how to use it lol. Gotta say that even on a bad day it takes better photos already. ps Love your CAS design, it really makes those flowers shine!

So sorry to hear you have not been well, migraines can really kick your butt! I just pray that you are feeling better sooner than later. Your card is simply stunning by the way.

Oh Bev, I am so sorry to hear the dreaded y.k.w's have struck so badly for you. I get the odd one for a day and that is more than enough for me! Here's hoping you can..knock it on the head (for want off a much better phrase) as soon as possible!

Don't you hate it when the camera doesn't cooperate! Your card looks so lovely. Those stamps are great and I love how you've placed them in the vase. Very clever! A beautiful card!

Enjoy your time with the family! Hope you are feeling so much better very, very soon!

Such a beautiful card! So pretty!!

You and your SIL are in my prayers!!

Thank you very much for joining us this week at the Simon Says Stamp Wednesday Challenge Blog!

I wondered if you were down in migraine hell again, Bevie. So sorry. I have all my appendages crossed that you stay out of there while your sweet family is visiting so you lots of special time with Kelly!! Your card for Marilyn is another one that she will treasure. She is so blessed to have you there for her. Mwah!

So pretty! I am in love with this stamp set!

Bev I am so glad you are feeling better, I am so sorry you a migraine. I get those and they knock me right down for anywhere from 3 days to a week. I hope that the surgery and chemo are successful for your SIL and I am sure she will love this beautiful card. Enjoy your family and your granddaughter. ~hugs

Stopping in to say hi and sorry to hear that you were under the weather again. Hope your visit with the AZ bunch was wonderful! And I've been wondering about your SIL. Hope things start to look up for her. Hugs.
Oh, nearly forgot. Way to go getting those floral dies from WPlus9. They look fantastic.

I'm so sorry you have been so miserable. Don't let the cleaning and company wear you out so those YKWs some back! The card is gorgeous. I've seen lots of brights done with those flowers but your soft and elegant look is beautiful!