Birthday season is in full swing here. Last week, as many of you know, I was down and out with migraines (now referred to as ykw - you know whats), and didn't get to my cards for this week's birthdays. That, and I had three of the little grandchildren for a sleep over Saturday while mommy and daddy went to a wedding in Chicago. So I was behind already. Sunday I was just plain tuckered out from playing with the little ones...they really kept me hopping and laughing. Then yesterday, Mr. Nojo showed up and somehow managed to add several layers to the recycle bin. Today was much better. Mr. Nojo was banished and the pings have begun to resound once more. I'm no where near done with the birthday and anniversary cards for this week, but I'll be caught up by tomorrow...I hope...

It's been a pretty good day. The contractors were here and poured the new steps and sidewalk out front. I just went out and poked it with my toes, and it's already begun to harden really well. They'll be back tomorrow to put the 84 year old, newly sandblasted and painted railings back up, and pull the forms. After they throw some dirt down, I'll run and get some grass seed, and go crazy with that. Way too many birds nesting nearby not to put down 'extra' seed. Sometimes I love being a homeowner and seeing things done, and other times all I can see are dollar signs....If the birds don't somehow manage to eat all the seed, I'll post a photo when the grass comes in.

My first card is for DH's birthday. We're huge baseball fans, and so how could I not make some kind of baseball card for him? He's been a Yankees fan since he was a kid back in the 1940s, so I had to kind of go Yankees with his card. But not too much this year. They're not doing very well, and then there's the whole A-roid scandal happening, so this card is somewhat low key Yankees. Thought I'd pop it into Moxie Fab World's Birthday Card Challenge while I was at it. 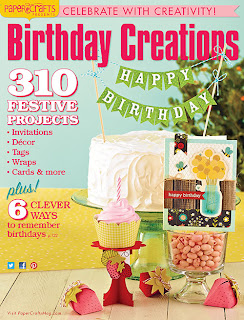 I tried to draw pinstripes. With colored pencil. With distress markers. That's part of the reason my recycle bin has begun to overflow. I gave up. It was just way easier to cut skinny stripes... 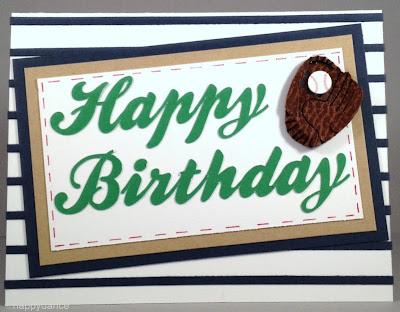 Sorry for the poor lighting. Right when I wanted to snap pix, the sky decided to become overcast...The stripes are really navy blue, not black. I used Bazzill for the base, and cut green (for the color of the grass) letters using a baseball font on my Cameo. The mitt and ball are from a package of Cubs stickers, but I don't have the manufacturer information. The navy and kraft mats are from my scrap box, and I added stitches with my red SU marker.

My next card is for Jackie Rockwell's Pantone Color Challenge. She put up a beautiful shade of blue, and as soon as I saw it, I remembered a piece of dp that I had in my scraps box. This card is a little girlish, but I will admit that I like the way it turned out. Now, if you haven't checked out what's going on over at Rockwell Designs, please pay Jackie a visit. There's a prize involved, only I'm not telling what it is...if your curiosity is peaked, go and see. 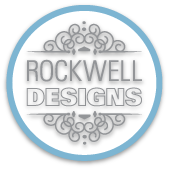 I chose to go with silver rather than gray in my design. 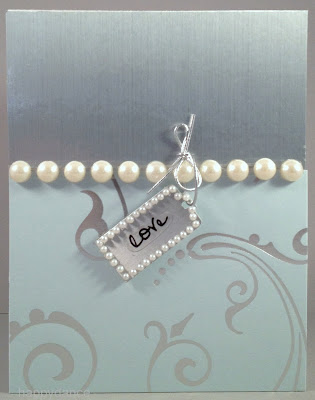 Upon a white Bazzill base are two scraps of beautiful and unknown papers. The top is shiny silver, as is the little tag. In real life, the blue looks much closer to what Jackie has shown. The mini pearls (hahaha 'Minnie Pearl', get it?! hahaha) are from Michaels, and I cut them apart from a swirly design thingy to put them on the edges of the little tag. I cut the little tag from my Cameo and then tied it with some silver string to the line of larger pearls. The Sticko sticker fit nicely in the center. Rather quick and just a little girly. Well, I'll quit now so I can go watch some of the Cubs game. Happy dances everyone.

What super cool cards!! Hope all is well....

Love baseball too, Bev, and your card is fantastic. That little catchers mitt with the ball is so utterly adorable. I bet your hubby LOVES his card.

As for card 2 - WOW! Beautiful, elegant and just so lovely. (I pick this as a winner!)

Wow! You're busy, busy! Love that little glove and the beautiful elegant silver and blue - a perfect wedding or anniversary card! Glad you're enjoying your summer (except for the YKWs! Hopefully, they'll stay away for a while!)

Wow, you are busy+++! Your time with the grandkids sounds delightful; I'm LOVING spending time with my niece and nephew. Yep, they're full of the dickens: ever so much fun! As for the 'home improvements' - I hear you! Trying to tackle some of that with my folks! Glad to hear the YKWs have settled; hope they disappear!
Now, these cards of yours: wonderful!! The baseball card = perfect for your husband, and that mitt = awesome! I have a baseball glove necklace charm - must remember to wear it more often, as it's unique and quite lovely! Your blue/silver card = elegant!!
Have an excellent Wednesday; happy crafting!!
c

Both cards are so different. The first one is really cute! The second one is very elegant! It would make a really beautiful wedding card. So glad you played along in my Dusk Blue color challenge!

The cards are so different and wonderful in their own way. I'm with you on trying to draw lines. I just bought the stamp stripes for just that reason. The blue and silver card is gorgeous and perfect for an anniversary or wedding. Sorry about the ykws but glad you got to spend time with the grandkids. That's always a special time.

Yours cards are both fantastic. LOVE the elegance of the silver and blue with the pearls.

Bev, these are two wonderful cards. I love the first one with the baseball theme...so fun. Your second card is so classy and very elegant. So beautiful.

Wow girl...you're on fire! Two more amazing cards! Totally different styles and totally perfect for each occasion! The baseball card is so creative (the stripes look perfectly navy on my monitor) and so trendy! Love the red 'baseball' stitching. Grand slam hit with this card!

Beautiful, elegant, classy - the pearls totally rock this card! So well balanced and designed - the Love tag seems to draw the eye right to the center of the card!

Great card, Bevie! From a fabulous guy baseball card that your DH will love to an ultra-elegant and feminine blue dedazzler! Glad you are headache free, rested, and full of Mo Jo Pings!!

Hey Bev! Thanks for linking this up to the Birthday Card Challenge in the Moxie Fab World! I'm so glad you joined in on all the fun! :)

Both cards are wonderful. Love the low-key Yankees theme. And so happy for your front walk. Hope all turned out as you hoped.