This week's cue card over at CASology is something everyone likes... 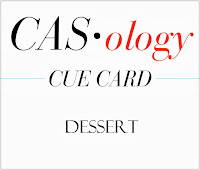 What's not to like?! I can think of hundreds of desserts I'd like to climb right into and devour my way out, but maybe that's not such a good idea anymore... A little taste of something heavenly, now that's a different story altogether! I've been good. I've been very good. In fact, there's more than half of a fresh strawberry pie still sitting in the 'fridge. It's not that I don't want it, but rather, my better sense says I don't need more than a taste. So I will content myself with rice cakes, walnuts and string cheese until I'm svelte again. Until that happens, DH can have most of my share.

Mmmmmmmm.....Doughnuts.......Channeled Homer Simpson this morning and came up with a card! 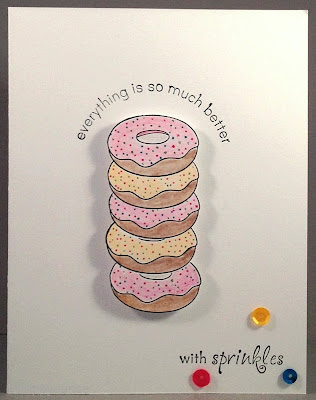 A nice tall, wobbly stack of doughnuts. Personally, I'd rather have a plain cake doughnut and skip the frosting...but that's just me.
I started with a Bazzill white base, then used a scrap of white to stamp the stack with Taylored Expressions Sprinkled With Love set. I colored the doughnuts and frosting with SU colored pencils and Copics, and used SU's blender pen. The sprinkles are made with SU markers. Sentiment is in black SU ink, and some sequins from Neat & Tangled. Fussy cut and popped up. That's it for this one. Happy dances everyone.

Oh, this is just too darn cute! I love sprinkles on my doughnuts, it really does make them taste better. Your card is about as cute as they come, and your little touch of sequins, just perfect!

Ooooh these look so tasty! Well done you on having so much willpower. Thank you so much for joining us this week at CASology

I'm with you on the donuts! While I appreciate the idea behind the sentiment of things being better with sprinkles, I prefer them plain! lol! Love the colours and the coordinating sequins. It may interest you to know that there is NEVER an open bag full of chips in my house (or a closed one, even!). That's why I can't buy them anymore - I just eat them! lol!

What a fabulously fun card and with the perfect sentiment too! Doughnuts are only just making their 'big' entry into the Australian market (thank you so much Krispy Kreme) and I gotta say my fave is the original... and probably only 'most' of the others lol.

Bev - your willpower is applause-worthy! Donuts and I don't agree with one another, but give me a plate of home-made chocolate chip cookies, and watch the crumbs fly! Speaking of donuts, have you seen the 'latest' fad: donut/croissants - aka "cronuts." Your card is BEYOND adorable! A completely calorie-free feast for the eyes! LOVE it!! Hope you're having a fantastic day!!
c

I agree, I have been very, very good. Not saying it has been easy, but I am making it happen! I have set some goals, and proud to say I am almost to my halfway goal hooray!!

Okay, the card is an absolute darling for me!!

Thanks for indulging in your sweet tooth with paper, Lol, with us at CASology this week!!
-Kimberly

Paper donuts don't have any calories so you are way ahead of the rest of us! Perfect dessert card! So glad you joined us at CASology this week!

So sweet and so true! LOL!

Love your sweet take on this week's cue word Bev. Thank you so much for joining us this week at CASology and sharing your yummy treats!

Love this donut card , now I want a few! So cute!

Those doughnuts are adorable! I'd love doughnuts for dessert any day. ;)

Love your stack of doughnuts they look really yummy! x

Oh c'mon, no point in my entering CASology's challenge now! This is such a winning card, Bevie!! BTW, congratulations on being self-controlled! That button broke on my panel ages ago!!

"Mmm, doughnuts...what aren't they good for?" That is one of my all-time favorite Homer Simpson quotes! So glad you channeled your Homer when making your card, it totally made me laugh! I must admit, I love doughnuts and I can handle sprinkles on them any day! Your tower of yumminess is wonderful...love them popped up for dimension! So glad, as always, that you played along at CASology this week!

Yum! Now I am hungry! lol Such a cute card. Love all the ideas you come up with. All so different and creative. This is no exception - clean, clear, simple, PERFECT!