First, let me apologize.  I love seeing all the wonderful and beautiful cards so elegantly crafted over at Freshly Made Sketches. I also like to play along. 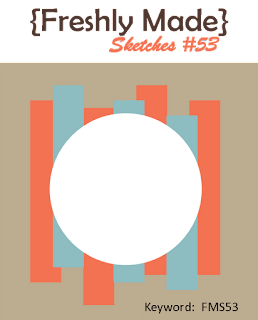 I must confess, though, that the only (and I mean the only) thing that came to my mind was, bacon and eggs. I tried for several days to shake that image, to come up with something comparable to what the others had made, but bacon and eggs wouldn't leave me alone. So I thought, I'll try to "make" bacon, and since that won't work, maybe the whole idea will go away! So I sat down with my SU inks, copic markers, paper and scissors. Wouldn't you just know...first try with everything -- colors, inking, cutting--absolutely worked. Dang. And I knew that on my Just Because Cards Cricut cartridge there was an egg. Dang again!  So I cut the darn egg out. I then thought, hey, it will probably look like total yuck, so maybe NOW I can get this off my brain.  That didn't work either. The pieces sat there calling me, asking me for a blue plate. They sat there for two days. I tried to tell the bacon and eggs that the plate just wouldn't look right.  They said (and I'm quoting here) "make a square plate". I had no choice. Once put together, they said "you are going to submit us to Freshly Made Sketches #53, aren't you?" I tried to reason with them, to say they were unworthy, that they would be out of place with the other cards, but to no avail. They refused to leave me alone until they made it over there. So for this, I apologize. Blame it on the bacon and eggs. Be sure you stop over at Freshly Made Sketches #53 to see what the nice cards look like.   http://freshlymadesketches.blogspot.com/ 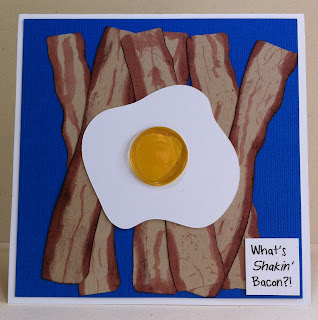 Here's what they forced me to use:  Bazzill white and yellow cardstock, and random scraps of tan and blue.  SU Bravo Burgundy ink, and Copic E04 Lipstick Natural marker, Pea Hollee computer font, and for the yolk, a Sticko's Tiles Play circle epoxy sticker. Well, I hope they're happy now...
; )

Love your genius take on the sketch! Very fun!

What a hoot! So unique and creative! I am so lovin' the bacon! Thanks for playing at Freshly Made Sketches!

This is so much fun! I had a big laugh with this one. Priceless :)
Inky hugs, Pauline

This one caught my eye! So creative!!

Oh my goodness .... how awesome is this ... creative, spontaneous and definitely fun ... great job!
Thanks for joining us this week at Freshly Made Sketches!!!

This is so clever!! Love it!

Hi Bev! Ha! Great take on the sketch, you clever, clever girl! Thanks for joining us this week at Freshly Made Sketches!

OMGee! I chuckled when I saw your card. Then I started laughing my butt off as I was reading your post! You are too funny and incredibly brilliant! Love the eggs and bacon!

Your card is adorable!

I have to tell you that I was scrolling through the entries and rolled down and then back up to see this card. I LOVE it! I think that is so clever and it made me smile! :) Your bacon and eggs look so good. And I love the story too! :)

Great take on the sketch! I love that bacon!!! Such a creative idea! Thank you for joining us this week at Freshly Made Sketches!