Beautiful morning out there today. Pretty blue skies and oh-so-glorious sunshine; what a lovely way to start the weekend. Just got off the phone with my sister who lives in northern Wisconsin, and she said they're about to get hit again with another 15" of snow. Those poor folks are at the "shoveling off their roofs before they collapse," stage. Haven't had to think about that in a forever time. So for all of you folks who are up to their eyebrows in snow, be careful, and remember that Spring will come.

I've got a card to share today. Saw the prompt at CASology, and thought it might be fun to play there. 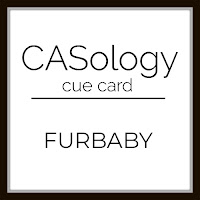 I've had pets of all sorts, though mostly dogs and cats. Our last critters were Cinnamon and Sugar, sweet kitties. We had to have them adopted into another family once DH started having surgery, so at least for the foreseeable future, we are true empty-nesters. 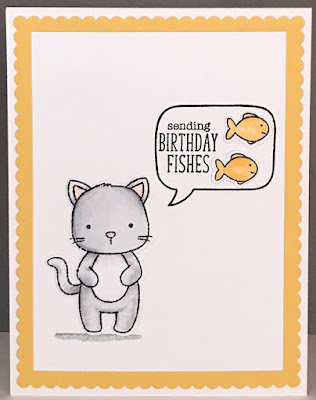 This kitty is from N&T, as are the little fish. The sentiment is from MB, and the speech bubble is from LF. The scalloped die is a ME. A bit of Copic coloring and done. If my kitty card isn't CAS enough, I do hope the DT at CASology will take it down. Now go and enjoy your weekend. Make cards and do what makes you happy! As always...

Awww, what a cute cat, and I think you have captured it's thoughts exactly. Thanks so much for playing along at CASology this week.

Adorable furbaby, I love the card :)

Awwwwwww...I love this card Bev! Your little kitty is so sweet and I adore that sentiment!! We had sunshine both Thursday and Friday and boy did it fuel the soul!! Of course I ended up having to dust as all that sunshine really made it stand out! Have a great weekend my friend! Hugs. :0)

This would be such a fun design to do batch making for those sweet little grands, Bevie! It's so cute! I love the goldfish colored scalloped frame and BTW, good job on the coloring! So great to chat the other day! Enjoy the weekend and I hope the sunshine lasts a few days! Hugs and fishes, Darnell xxoo

Sending that sunshine my way Bev! lol We are dreary here and in a high wind advisory for the whole state. We need the wind to dry things off, but also need the sunshine. But we don't need 60 MPH winds! Oh my goodness, this CAS card is adorable!!! Love the kitty's expression and love his little though bubble. Too cute are those gold fish! Loving the scallop frame as well. I can't imagine this card not being CAS enough, it sure is fabulous! Hugs, Brenda

I'm smitten with that kitten! What a honey, and of course she'd send fishes - too cute! We've always had a dog growing up. Cats make me nervous - weird, I know.

Such a sweet furbaby! As I'm typing this my two feline furbabies are having a fight right outside my craft room door. They get along quite well but every so often they have a screaming fit - typically in the wee hours of the morning. At least this morning, I'm already up and around!! I love how you put together a variety of companies' stamps and they all work perfectly together!

Cute and fun and punny, Bev ... such a sweet card! Enjoy all that glorious sunshine! Miss you heaps ... hugs, Anita :)

That is such a sweet little kitten, Bev. I'm sorry that yours had to find a new home. I must say I miss having pets but my husband isn't an animal lover at all.

Sweet! Love that adorable kitty, Bev. And great sentiment to go with it. Fun card. Glad you are having a sunny Friday! xx