Before Thanksgiving, Carol Mayne asked me if I'd like to be her Guest as the wonderful Fusion Challenge celebrates its Fourth Anniversary. I was delighted to say, "YES!!!" I'd say this is just about the most perfect way to start out the New Year!! Won't you join me in wishing Lesley and her fabulous Design Team a very happy anniversary by joining in the fun at Fusion?!

Just like it says, you can either use the sketch, or the photo inspiration, or both, to create your card. For the first challenge of this New Year, and in honor of their Fourth Anniversary, this is the Fusion Graphic: 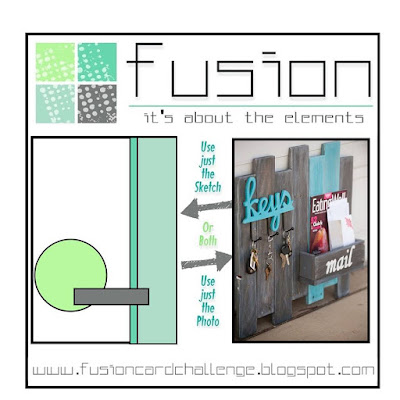 I made a little something using the sketch and the colors from the photo. Since I needed a more masculine thank you card, my brain went in this direction. 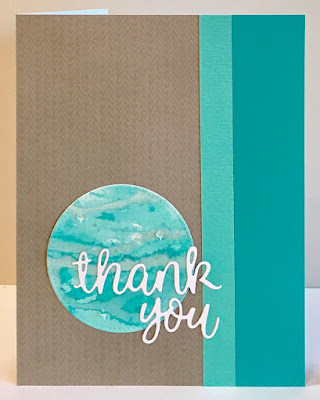 I surprised myself and made this card in less than hour. Who knew??! The grayish-brownish patterned paper is my nod to the wood from the photo. I used some watercolors to create a splashy look for the W-Plus9 cut circle. The AE sentiment was a Christmas gift from DH to me (wink-wink...boy does he ever have good taste!!). The two blue strips are from my scrap files. I added three PTI rainstones to the circle as well. And there you have it! Make sure you head on over to Fusion and wish them all the best, and while you're there, play along! Happy New Year, and

How honoured and thrilled I am that YOU are my special guest for the FUSION Anniversary! Your card: only perfect! The brown/blues background is a 'handsome' canvas for the water-coloured, eye-catching circle and sentiment! Yes, DH knows how to select *just* the right crafting gifts, doesn't he! LOVE your card; LOVE youuuuuuu!
Hugs, misses and love~c

Congratulations on the Guest Design gig for Fusion, Bevie! Your make is fantastic and will inspire the participants - of which I will try to be one. (Grammar, is that you?) I'm a big, no, HUGE fan of any shades of turkoise, so this was a WOW at first glance for me and I love the colors with the "woody" panel! Your watery circle is divine! Have a great weekend and Happy New Year to you, too!! Hugs, Darnell

CONGRATULATIONS on the guest design!! This is just gorgeous and you did this in less then an hour? Kudos to you!! I never can do anything that quick when card making!! I LOVE the circle you watercolored and the pattern paper is perfection. STUNNING design!!

Congrats on your GD gig Bev, you have totally rocked it, both the sketch and the inspriation! Love love those colours together!

Yahoo! An absolutely fabulous way to start the year. Love the movement on the blue circles...fabulous!

Happy new year! And fancy meeting you here @ Fusion! I love the direction your brain took with this fabbo man-card. That's some great texture and some great colors on that circle!

That is a smashing card. Great colors and crisp design.

Your take on the challenge is inspiring, Bev. Love the modern look of your clean line design. The splashy watercoloured circle is gorgeous! xx

Yay! Happy New Year sweet Bev! What a great way to start the year! Love your clean lines and the amazing movement you achieved on the circle! xoxo

Happy New Year, Bev! and congrats! LOve your splashy water-colored circle!!! a fabulous interpretation of that photo!
You are such a good friend... to us all!
=]

I loved seeing you as a guest on Fusion, Bev, and your card is a perfect fusion of sketch and photo. Your watercolor circle is amazing and ties all the colors together.

Yay ... congratulations on your GD spot with Fusion, Bev ... what a great way to start the new year ... for you and especially for us! Your card is brilliant ... cool, crisp and graphic ... and that splashy look on the circle is fantastic ... it's positively planetary! Sweet sentiment ... good thing John knows what you need for your stash!!! Big hugs & bisous, mon amie, Anita :)

Happy New Year, Happy Dancer! Hope the holidays were nice and that 2018 will be good to you. I just love the watercolor effect you achieved on that circle. The colors are fabulous. Enjoy your GDT and stay warm.

Love your blues and browns together! Such a pretty card!

Congrats on your GD spot! You nailed it by perfectly combining the sketch and the photo! Absolutely love the watercolored circle!
Only 3 more days...