Good Monday morning everyone. Wanted to show you a card I made last night while the Cubs were on. And I also wanted to thank you for your kind wishes concerning DH. He's feeling better this morning, and while I know that he's never going to be "great" again, I'm delighted with 'better.' I can always tell when he's doing alright because he's sitting in the family room next door with MLB Central on. Maybe it's the way his team is playing that's helped his general well-being, lol!! In reality though, I know that it's all the prayers said on his behalf that is sustaining him.

Card. That's really why you're here after all. Only one today, but if I'm a good girl and get my chores done early, I might just make more! Hmmmm...I'll stop chattering now and get to business. Didn't think I could play with at the Curtain Call challenge, but as it turns out, I made a card that works! And since it's an Anything Goes at Simon Says Stamp Wednesday Challenge, I'm playing there too! 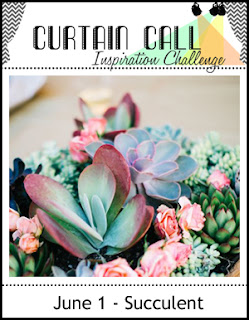 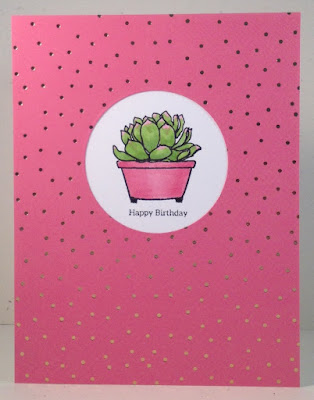 One little pot of succulents. The pot and succulent stamps are from two different HA sets, and the sentiment is from a SSS set. I die cut a circle with a WPlus9 die (yeah...like you couldn't tell it's a circle...) from a piece of My Mind's Eye on trend 2 patterned paper pad. And the images are colored with some Copics. One of the things I like best about this, is that the pink Copic matches the dp perfectly. Love it when that happens!! I've got to get to the chores now, but you all have a great Monday, and as always

I'm glad to hear your hubby is feeling a bit better Bev. I really like your card. I've recently got some similar stamps and really enjoying them. Barbxx

Glad to hear that he is a little better Bev, I'm sure it's all that wonderful care he has, you are amazing!

I am glad that your husband is feeling a bit better. I am also glad that you made such a lovely card. I adore your succulent and LOVE how you paired it with that paper. Beautiful design!!

So delighted to hear John's feeling better. Baseball to him is like crafting to us: the perfect prescription for brightening spirits! I'm nearly turning cartwheels at your darling cactus, nestled in its pretty pink pot and surrounded by polka-dots! It doesn't get any cuter than this! LOVE x LOVE! Now I need to seek out my succulents sets and get 'hurrier-ing' to make a card *grin*
Hugs, love and misses,
~c

I've a soft spot in my heart for succulents. And paired with pink polka dots? Couldn't be any happier! Hope you and yours are well.

Oh my, this is a delightful card! Adore the pink dotted paper and your perfectly colored succulent!

You colored your succulents just perfectly, Bevie, and I'm as pickled tink as you are that the dp matched so beautifully! This is a simple design that blows one's socks off!! Hugs, Darnell

Bev your succulents are coloured so sweetly! Love!

Sorry to hear your hubby has had some health challenges and so happy to read of the Prayer support you have. Pray is the most powerful tool we have!. I am loving those lovely pink tips on your cacti and what a bonus to be able to match it with your papers so well.......love it when things like that happen.

That is such a sweet succulent, Bev. Sometimes I have a hard time figuring out how to display small images like that but your circle in the DP shows it off beautifully.

Ya think that this beauty made me smile from ear to ear? YEP, sure did! Absolutely 'delightful'. Love the wee bits of pink that you added to the leaves - clever idea and so effective!

I love this, Bev! Your colouring is perfect!

Love the polka dots and darling focal image. Thanks for joining us at the Curtain Call!

So happy to hear that hubby is doing better and yes, we all will take better too!!! Love your beautiful succulent card Bev!!! It is gorgeous with that beautiful pink and gold paper, I love that you made your succulent pot match the paper and of course look at those succulents with the pink tips, love, love, love!!! I don't own any succulent stamps but you are making me rethink that one!! I also want some real succulents as I'm so falling in love with them. lol Hugs, Brenda

Such a luscious succulent, Bev ... your colouring is fabulous ... and the polka dot background is fantastic! Love all those speckles of gold with the succulente! Big hugs across the pond my friend! Hugs, Anita :)

Hope John is doing okay and I hope you are taking care of yourself too. Sweet card, Miss Bev, I love it!