Last month, Marina contacted me and asked if I'd like to Guest Design for this fortnight's Inkspirational Challenge. You see, I'd been a Top Pick with this card, inspired by Carol. As soon as I could frame coherent sentences, I replied with an emphatic, "yes!!!" To say it's an honor and that I'm humbled is a huge understatement. The DT is amazing, they are generous with their comments and have been absolutely encouraging. So a shout-out to the team at Inkspirational Challenge, and a thank you as well. I'm delighted you asked!


The brief for this week is "Use five (or more) stamps." Small amounts of panic, as I usually only use a stamp or two and die cuts. Turned out to be much easier than I thought! 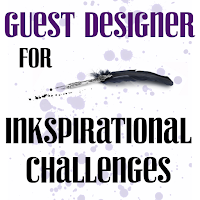 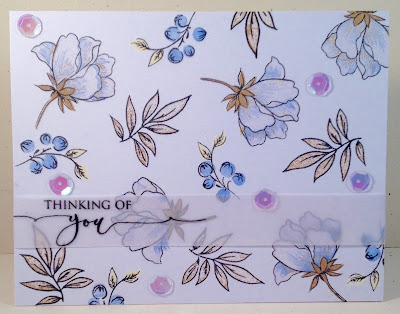 All of the flowers and leaves are from my NBUS set by Altenew; Peony Bouquet. Layers, and layers, and layers. The outlines alone were three stamps, done in Versafine black ink. Next I grabbed some Altenew Buttercream ink, and stamped those little leaves next to the berries. Are you keeping count? That's four stamps...The berries were done in some Studio G blue (five). For the large leaves, I used some ME Hazel ink, lightly stamped (six). The peonies and their stems were done in the same blue and hazel inks (seven, eight, nine). And my tenth stamp was the Gina K. sentiment done on a vellum strip. (As to those sequins...they're pretty CLEAR, but photographed pinkish.) Kind of proud that not only did I use five stamps, I doubled the requirement without any problem whatsoever!

Hope you're inspired, and that you play along this week! Lots and lots of ways to use five or more stamps - make your own background, layer stamps, stack a subway of sentiments... well, you get the idea, and don't forget to see what the DT has made, too. You'll see some incredible inspiration there! Happy dances everyone!!
Posted by Happy Dance at 12:01 AM

YAY you! Such a beautiful card...awesome stamping and coloring!

Well Bev, I think you are just showing off using 10 stamps!!! No I am joking, I am hugely impressed and they are stamped to perfection. Such a gorgeous design and pretty colours. Great idea to use the vellum strip so we don't mix the amazing stamping. So good to have you as GD at Ink and by the way I was speaking to Kim today...enjoy!!

This is so gorgeous - delicate and intricate and skillfully stamped. The sentiment stamped on vellum compliments it perfectly. I can't believe how many stamps you used, yet how uncluttered it looks.

Your kind words about our team mean a lot to us!

Thank you so much for being a wonderful Guest Designer at Inkspirational.

Congratulations, Bev, on being Guest Designer at Inkspirational! Your enthusiasm and kind words are greatly appreciated. Your card is delightful and so pretty! Great design work! Best, Yvonne

Your card is so gorgeous, Bev!! Your stamping and colouring is fantastic and I love the strip of vellum. So glad you could be our GD this challenge! :-)

Whoop whoop! Huge congrats on your Guest Designer appointment and clearly it is well deserved as you've smashed this challenge with your gorgeous card! Love love love it! Hugs!

Congrats are in order for your guest designer gig! Your card is beautiful and bravo on using ten stamps! Your images are positioned so perfectly too!

Congratulations on your GD spot! This is an absolutely beautiful card Bev! The soft, pretty colours finished off beautifully with the sequins & vellum. Love it!

A Big congrats on your GD Gig Bev, you have totally made your card shine! And I really can't wait to see what else you create with this beautiful stamp set, I just know you will love it as much as I do!

A huge congrats on the DT, but also on just showing 'em how good you really are by doubling the requirements! Your card is melt-worthy! I'm just stunned at the beautiful colors and images used to create this beauty! Truly in awe over the beauty here!!! Well done, good and faithful soldier!

Absolutely ecstatic that you're our Guest Designer for this challenge and WOW! You've created a gorgeous card using the smaller images from Peony Bouquet! Requirements met to the 'above and beyond' level! Guaranteed I'll be casing this beauty! Hope you and the gals are now safely gathered at the Lake House, having an exponentially great time that will only become more fantastic as the week unfolds! Magical memories...
Hugs, love and misses~c

What a lovely card! It is wonderful having you design with us at Inkspirational! Congrats on the position! I like how you created a pattern and your use of vellum is great!
- Shauna

Absolutely beautiful card Bev and a well deserved Guest spot. Love the design and the colouring.

Congrats to your GD spot! Your card is truly lovely! Would also make a great wallpaper!

This is a wonderful stamp set and I love the collage stamping you did! Great card! Thanks for being our GD at Ink!

I am so CASEing this card, Bev. I Love it with a capital L.

Oh, and congratulations on your guest designer gig. You did them proud.

Fabulous card, Bev. Perfect placement of images and beautiful coloring. Congrats on being the GD. Hugs.

Beautifully done!! Such charming images - wonderful background you created for that sweet sentiment. I love the soft and gentle colors.

My computer is still being STUPID!!! Seems to be affecting our internet as well so I'm sneaking in a bit of commenting at work. Have been on the phone with MTS several times. Frustration level is through the roof, so hopefully things will be resolved soon.

OH, Bev, what a beauty this is. Not only do I love the beautifully stamped background, but I also love the pretty colors you used. Well done!

CONGRATS on the guest design assignment. You rocked the challenge.