You may or may not have noticed, but I've been pretty much absent in blogland as of late. DH had a minor surgical procedure (which went well), and while at the doctor's office, he proceeded to pick up that nasty upper respiratory virus that's been going around. So I've been playing nurse these last several weeks. I don't mind; it's all part of marriage. As he's sleeping in this morning, I decided to forgo the chores and take a little "me" time. The kitchen, vacuuming, and so forth can wait a few more minutes. Crafting can't! Hopefully, he'll feel a bit better today too!


It's the Coffee Loving Cardmakers Spring Blog Hop time, and because of DH being ill, I knew I couldn't comment on everyone's pretty cards, but I thought I'd whip up something QAEZPZ (quick and easy peasy per Miss Darnell's wonderful vocab!). I had some brand new Verve NBUS (another Miss Darnell contracted phrase; Never Before Used Schtuff) that I had to have, and it went well on this card, though I only used one of the new stamps... 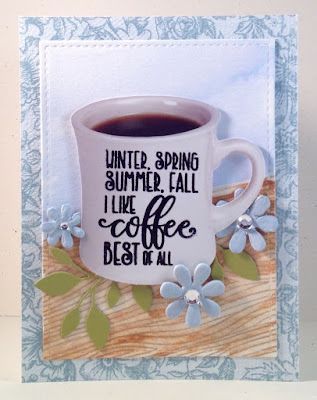 Starting from the base, I used a previously hoarded saved scrap of SU paper. Jen M., you'll recognize this right away... I stamped some LF woodgrain on an MFT die cut panel of watercolor paper, and used my Ziggies to color it up. The coffee cup is ancient. It's a printed die cut purchased from a now defunct Scrapbook store in Cedarburg. I heat embossed the sentiment. Some old flowers, and a nice Poppystamps leaf die. It went together pretty quickly. And since the theme at SSS Monday Challenge is Food and/or Drink, I'm going to play there too. And I'm off to check on my sleeping patient again. Happy dances everyone!

As an "aside...," what the heck did blogger do to my header???? It took away the nice gray pattern and left a strip of the ugly, old one peeking through. Wonder if it's time to move to Wordpress?! Has this ever happened to you? Aaaarrrrgggghhhhhhhhhhh!
Posted by Happy Dance at 8:29 AM

FABULOUS card, Bev! Love it!
Hope your husband feels better soon!
And oooh wonderful blogger...lol I've thought about going to wordpress as well. ;) I haven't had any issues with my header, though. Hopefully your header will appear back to normal soon.
Take care, hugs

Bev this card is charming. May I share with you the addage "what will happen if I don't"? Nothing. If the bed is not made or the dishwasher does not get emptied, nothing will happen. Take time for you and enjoying what you like. Hope the honey is better.

Fabulous card, perfect for the hop. love the design and colors

So glad you found some me time Be ! Love this sweet number and I like that you used an older printed die cut from when we are bought them because they were so cool! Hope hubs Is feeling better today!

Yes, you have been missed! Hope your hubby will feel better soon! Glad, you chose to make a card instead of more housework! Very pretty card! That coffee mug looks so realistic as if it wanted to jump off the card!
Sorry, don't know what happened to your blogheader! At least it's only two little strips...
Have a wonderful Easter my friend!

Such a fun sentiment and sweet card.

So pretty! Love the sentiment, the wood and the colors!

Hello Bev, thank you so much for your lovely comment on my blog. It made me so happy, I even told my hubby about the lovely lady from blogger-land that left so many happy words on my blog.
What a great blog name you have (I love the reason behind the name)!
Happy and blessed easter to you and your loved ones.
Greetings from Switzerland, Nicole

Beautiful card! Love the previously hoarded scrap you used for the BG. lol

It's lovely to see you back Bev. I hope your DH is soon on the mend. Glad you allowed yourself a little me time. Your card is lovely. What pretty paper and I love the coffee image. Wishing you a Happy Easter. Barbxx

Wow, your printed die-cut and embossed sentiment look like you can grab the cup and drink from it...fantastic. Love your layout, stitched panel, in particular your wood grain you created and love it all. Exquisite.

Bev....I was so excited when I saw you posted a card for the coffee hop. This is just fabulous! Miss seeing you in blogland. Miss you lots.

How nice this card turned out, Bev, always nice when you can make a scrap card. Glad you found time to play as I enjoyed visiting your blog! Have a Happy Friday and Happy Hopping!

This is so cool! That coffee cup looks so real...lol....great card!

Hey Sweets! So happy to see you hopping! Your coffee cup is steaming, it looks so real! About blogger ... I can't help, it almost always plays nice with me. Once in a while it helps to clear your browser history thoroughly - when you get back to housework that is ... never a priority!! Craft on, girlfriend!
=]

Oh, what a fun party you have planned! And your card is fabulous, too!

WOWZERS!!! Your woodgrain paper is amazing - was sure it was DP! Don't know what you did but you created an incredible 3-D looking card! Seriously looks like I could reach into the photo and snag the cup of coffee! Sweet sentiment too :)

BEV! I adore your fabulous coffee card...perfect mug.
Hang in there my friend.

Such a fun anf fabulous card!

Very pretty. Love the sentiment on the cup. TFS

Great card, I LOVE that sentiment!
As for Hubby, glad he made it through the first and sorry he picked up the latter. Hoping he is doing better now, and that the virus goes NO FURTHER in your house!!! Blessings to both of you!

Lovely background for your fun mug!

Beautiful card! Love those flowers! I just became a follower of your blog and would be honored if your returned the favor! My blog is http://carriescustomcards.blogspot.com
Have a blessed Easter!

Fabulous card! Love how you combined the different elements. Hope your husband feels better soon & who cares if you miss a few chores!

Your card is so beautiful. Great design. Thank you so much for sharing with us at Simon Says Stamp Monday Challenge. :)

Love your "ancient" coffee cup diecut. It's so fun and realistic. I love it! :)

FABULOUS card Bev!!!
LOVE your sentiment and design, it has SO MUCH dimension and such pretty colours!!!
PS - hope your husband gets better soon!!!

Talk about one cool card, my friend; that cup looks like I could just reach out to touch it...and share a cuppa joe with you! The blues/woodgrain: yummy combination! Good to hear John is on the mend and that you're finding snippets of crafting time betwixt and between your various nursing duties. Spending Easter at mom-in-law's (just the three of us, as Andy's sister's family has other commitments). Pretty here with the green grass and flowers in bloom...
Hugs, love and misses,
~c

Oh, how clever! I think I need a coffee mug with this saying now! :) Fabulous card!

I'll be over to share that coffee, Bev ... or a fresh one as I'm so late coming that it'll be cold by now! Either way, so happy you got some me time to create this delight ... hoping John is much better ... and that you stayed virus free this time round! Hugs & bisous, Anita :)