Mondays in My World

Every day in my world is pretty much a Saturday. Including Mondays. Since I've left the work-force, and since I've no children at home anymore, it's all fun and games for me (well....not really, but wouldn't that be nice?!). Our company left over the weekend, and it's back to a somewhat normal routine until later this month. Gloomy weather today, and grocery shopping awaits my going, but I really wanted to get a post in this morning. I need the sanity of this blogosphere. DH has been sick, and with company, it wasn't fun for him; he feels like he's missed their visit. Took him to Urgent Care, but will call his family doctor in a bit. It's not serious, but he's feeling miserable, poor baby.

Enough about that. Onto cards and such (the keepers of my sanity). I missed the Muse challenge. Just couldn't get a photo taken even though I had a card made,  or a post written until now. Sorry about that Muse friends. I did manage to get a couple two three cards made while company was out visiting other family members, so will post them before I miss any more deadlines! First up is a card for the current MFT Sketch Challenge. Had something completely different in mind, but this one demanded to be made. When pings ping, I must obey the call, lol! 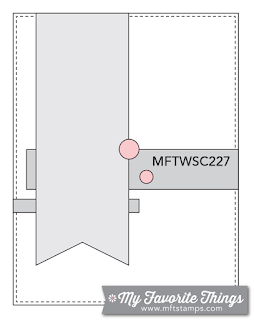 Here's what those pesky pings demanded: 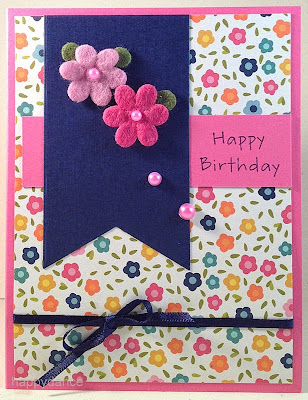 Stuck pretty close to the sketch with this one. All papers, except the Bazzill pink base and bits are scraps. Sorry, I don't know who made them. The navy flag is MFT, as is the sentiment which is stamped with some Jeni Bowlin ink. A few pearls, some seriously old felt flowers and a bit of Michaels ribbon. Irl, this is really happy looking.

Next, I wanted to play along with Tag You're It Challenge. I was on a roll, and this one pretty much made itself...using my hands of course, lol! Here's the inspiration tag created by Erin Thiem. How fun is this? 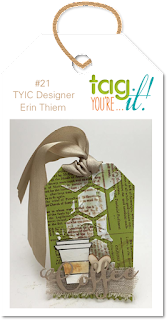 Since I wasn't sure when my company was returning, I didn't have time to haul out my Spackle and make a bigger mess than I already had, so I went in a bit of a different direction. 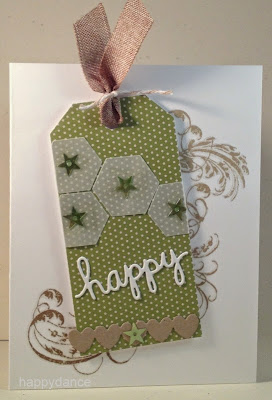 All papers except the Michaels white base are once again, scraps. The flourish behind the tag is an ancient rub-on. Someone out there in blogland used a rub-on last week on a card, and it inspired me to drag out the box full of them and see what I could find. And if it weren't so darn gloomy outside, you'd see that a portion of the flourish has some green in it... Some SC star sequins, as well as the tag die. A TT die sentiment, and some RC hearts. A bit of Michaels ribbon and some Twinery twine. Oh, and a hexie die from MFT.

And since I have an hour or two before CASology closes, and since I've a card to share, why the heck not?! There's a story behind this card...My really nice neighbor, Michael, brought over some freshly caught Walleye after one of his fishing forays. It was fantastic. So for a thank you, I thought I'd whip up a card. He's such a nice neighbor. Fits the "Shape" Cue card nicely, I think... 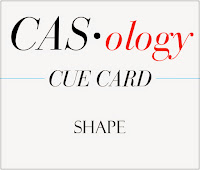 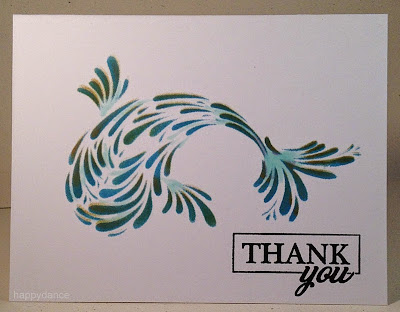 Found a cut file in the Silhouette store, and decided it would make a nice stencil. Used some ME Ocean ink, and some PTI Ripe Avocado ink, plus a bit of gold tossed in for good measure. A dash of Copic aqua colored marker to add a bit of something. And lastly, the sentiment is MFT with Versafine ink. The shape of a fish in watery droplets. Works for me. Well, since I've kept you long enough, I'll stop now. Happy dances everyone.

You can probably use your Muse card for The Challenge - same colours (check out Kim's blog) and you get points for Muse effort! Love this fun set of cards - that fish is amazing! So glad you joined us at CASology. Hope John is feeling better soon!

Fabulous cards, Bev! I especially love the last one with the whale -- it's fantastic!

Love them all! The fish card really caught my eye, what a great idea. Hope hubby is better soon!

Wow, Bev, three awesome cards! Sorry to hear your husband isn't feeling well, that is always a bummer when you have guests staying with you, too. Hope he feels better soon! Glad you were able to sneak in some crafting, always good for the soul! I love all three cards...and the CASology card is quite amazing! Gorgeous colors! Thanks for joining in the fun at CASology!

I'm so impressed that you got these all done in and around having company! You rock! The little felt flowers on your first card are super sweet and I love the happy flowered patterned paper! Your second card is an awesome take on the tag. Such a clever idea to use vellum instead of the embossing paste. Must remember that trick… And finally your last card is gorgeous! Love the way you blended the colours through the stencil. Really lovely!
I hope hubby is feeling better soon and that you have lots of happy crafty time this week! Big big hugs to you!

Love your collection. Isnt it nice when it all falls into place. Love how you used the stencil from silhouette. Brilliant card

Glad to see you got some crafting time squeezed in there. I hope your husband is on the mend. I love each card here! Your first card could not be sweeter. That rub-on flourish is genius behind the hexagons, it's a wonderful contrast. I'm in awe with your fish stencil, so artistic!

Fabulous trio of cards my dear friend...And a Happy Mother's Day to you, sorry I am a bit late. So sorry to hear that John is not feeling well, no fun being sick. Sending him well wishes. Now back to your amazing cards...I love each one of them and can not wait to see what you have up your sleeve for your Muse card that we have not yet seen! Please come and play along with us at The Challenge.
Ok, so you must have different files at your Silhouette store, I have never seen that fish, you did such amazing things with it...need to check it out! As always, love all your wonderful creations! Miss you lots...sending hugs your way.

Hello :)
Love your tag-and what a great take on the inspiration tag!
Best wishes,Nessa xx

These are so adorable ! I love the tiny little flowers and the topping of felt flowers. The way you did the tag is awesome :)

Well that last one? Fabulous winner! and I'm wishing those darling little flowers were "felt" by me! =] I'm thinking about you, Bev... hugs to you for taking such good care of your hubby!
=] Michele

Hope your hubby is feeling better by this time, Bev!!!!
Lovely set of cards you've got here!!!! Love the very cheerful, colorful birthday card - all the little flowers are so cute and I love the felt ones!!!!
The rub-on you've got on the second card is so beautiful and I you have really used it brilliantly here!!! Love the hexies and the little stars and hearts!!! I really like this card a LOT!!!! Very elegant!!!
And your fish card is just so very clever, Bev!!! Love your beautiful fish and the sentiment really looks great!!! Lovely!!!
Have a great day!!!!

Hope your hubby is feeling better soon Bev. No fun especially when you have company. Love your trio of creations!

Hope your husband is feeling better! Let us know! Your cards: a trio of terrific - and made all the more so because you did them in the midst of all the busyness you're embroiled in, of late! The bright, sweet flowers of the first are pure delight, while your tag+flourish is a marvelous translation from the inspiration photo. The happy die cut is extra wonderful. Of course, your thank you fish card...oh my! Perfect image, awesome stenciling...your neighbour will love this, as do I! What a sweetheart you are for making this just-for-him!
Hugs~c

How super cute, I love the tiny flower papers

Glad to see you had some time to get crafty! It's good for the soul to escape into the craft zone occasionally! And I must say that your fish stencil is pretty fantastic as well as your cool tag and happy floral card!

I am in awe!! Your designs are stunning!!! I LOVE how you created a stencil on your silhouette for the last card. How COOL!! I also LOVE the way you used the tag challenge. Your card ROCKS!!!

I don't know how you did it with all the goings on in your life, but you did, Bev. You made three wonderful cards. The use of the vellum hexies on your tag was a brilliant idea and that fish!? He's even better than eating walleye, and that's saying something. So thoughtful of you to make your neighbor that special card. I'll be praying that your husband gets well soon.

Gorgeous cards, Bev!
Congratulations on your HM for your fish card! I can see why it was picked. Awesome!

Sorry pal...I'm so behind in my visits and see that I've missed some amazing creations!

I am captivated, blown away, and in awe of your fish card! It is amazing! The colors are so...ocean! Love the touch of gold.

Love your tag with the cascading hexagons and the sweet polka dot paper! Rub-ons....forgot all about those!

And your sweet posie card is so stinkin' cute! The HB font was made for this paper! Love how you drizzled a couple of pearls beyond the yummy felt flower centres!

These cards are definitely destined for greatness!

Fantastic projects, Bev! I love the happy hexagons on your tag. Thanks so much for joining us at Tag You're It!

Here at last, my sweet friend ... sorry to hear about John ... hope all is now well for him. Your sweet posy card doesn't just look happy IRL ... it looks happy here too ... it's just delightful ... and your tag's so cool ... yummy detailing! Have to say there was a sharp intake of breath at your stencilled fish, Bev ... it's stunning ... the sense of movement is fantastic ... I can almost feel the sea spray! Congratulations on your HM at CASology with this awesome creation (shows how late I am coming by!) Hugs & Bisous across the miles, Anita :)

Hope your dear hubby is feeling so much better! Your beautiful cards are...gorgeous, that's for sure! The stencilling on the thank you card has just blown me away too. Inspiring!

Love your flower card, Bev. Thank you for playing along with us at MFT Challenge. :)

Wow you have been very busy love them all. Thanks for joining us over at tag you're it.

That walleye! You rock! (and I can taste it now)