No dinosaur card. The dinosaur I'm talking about is my computer. And it's groaning. I love my old computer. I know where everything is, and how to fix some of her problems. She likes me. I talk to her and she usually purrs. Lately, though, she's been groaning. And going very slowly. I've checked for viruses and malware, as well as giving her a good defrag, but for the first time, it's no longer helping. Sigh. That means its time to go shopping for a new computer. I could use your input on this... I've been running an HP and as I've said, I've loved her. Here's my dilemma now, however... Was not a big fan of Windows 8.1. DH had it on his computer and we eventually removed it and installed 7 again. That said, Windows 10, or whatever they're going to call it, isn't out yet, and I'm not loading a new computer with an old OS. The iMac AIO (all in one) looks intriguing to me, but I'm not sure if I want a Mac.

What are you using? Do you like it? What would you recommend? What would you want if you had unlimited funds? Is it difficult (or impossible) to transfer stuff from a PC to a Mac? I appreciate your input, so thanks!

I actually have a couple of cards for today. I'd like to play at the current Tag You're It Challenge, and also at the AEIHeartU challenge. There's still time for you to jump in too, "...won't you be my neighbor..." in the galleries??!! 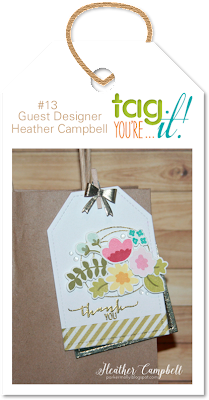 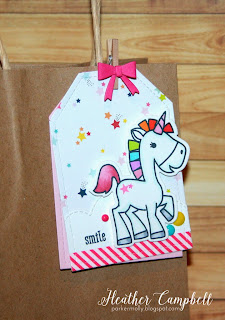 Heather Campbell is the GD at TYI, and CASEd one of her own tags. Both are beyond sweet, aren't they? And over at AEIHeartU, we're to paper piece our creations. 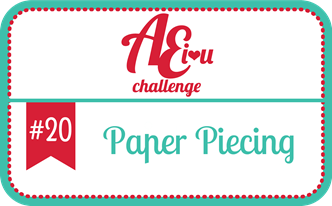 The first of my cards will be for TYI. Got my froo-froo on for this one...or at least as froo-froo as I get. It sort of fell together. 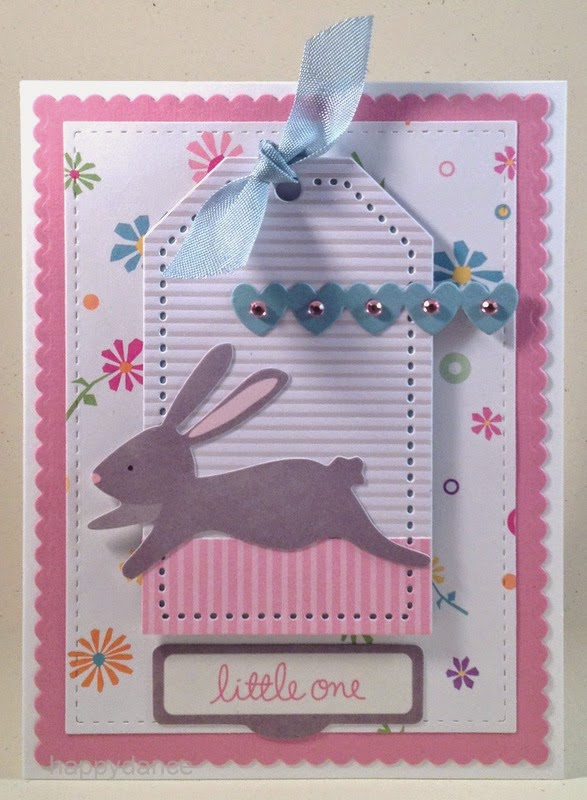 Started with a Michaels white base, and then used scrap after scrap after scrap for the panels and tag. The ribbon is some SU that I'm hoarding, the bling is from Kaiser, the bunny and sentiment panel are from Pebbles, and the dies are ME (large scalloped panel and stitched panel), and PTI (tag). I popped up the tag so it stands out a bit. It went together really easily. Love it when that happens!

Next is my AE card. 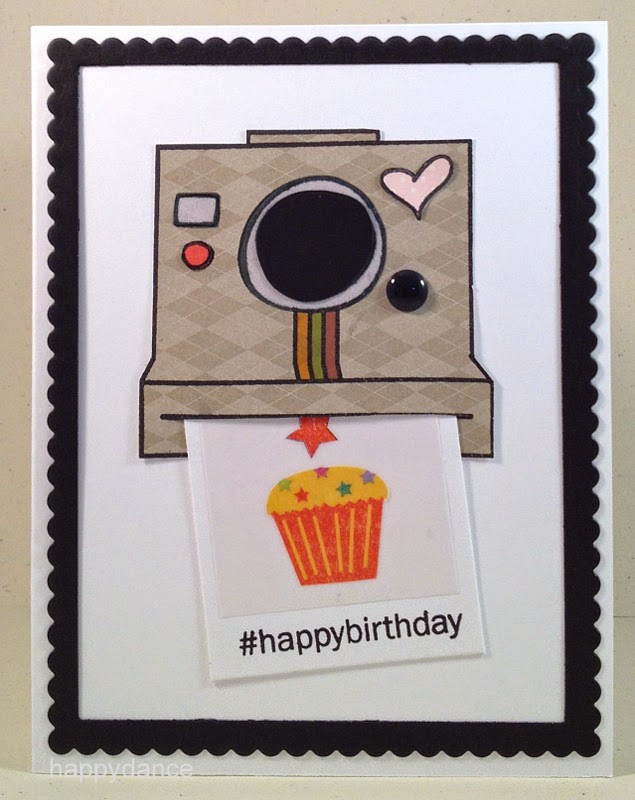 Again with the Michaels white base. And every other bit of paper here is a scrap. From the orange button, to the vellum on the polaroid print. All the gadgets on the camera were stamped then fussy cut and attached. The stamp set is "#Smile" by AE. I used an old cupcake sticker and star on the print, because it matched the orange bits on the camera itself. One enamel dot for the shutter button. Had fun with this one. I think mom had a camera like this back in the day... And I'll stop now. Happy dances everyone!

A gorgeous selection of cards. Sorry your having computer probs. Its always a nuisance when you have to change. I went with windows 7 as I didn't like windows 8 and thought it would be supported for a long time as a lot of businesses still use it over here. (UK), No knowledge of macs though.

Super sweet cards, Bev! I got a mac mini about 1.5 years ago when my computer died, and I love it! I wouldn't go back to a PC.

Your cards are adorable!!! I love how you used the scraps on the second card. I don't use mine enough. As for computer issues-we went to Mac's and have never looked back. Even my husband, who was a DIE HARD PC person loves it. I will be honest, though, I did buy MS Word, Xcel and Powerpoint for the Mac. I didn't love their word processing program. Good luck with your research. Change is always so difficult.

Love your cards! The bunny tag is so adorable and the camera spitting out a cupcake photo is totally fun!
Sorry to hear about your computer problems. I have a Macbook and love it. You will probably find that people are either PC lovers or Mac lovers, don't know if you will find someone who can objectively compare them. You seem to know quite a bit about PCs and you like yours... You know, it would be good if you would find someone with a Mac who could show you a little how it works and that might give you a feeling if you could work with it. Don't know about the transfer of data. It must be possible because people switch all the time but I don't know if it is a pain or easy. Good luck!

Hi Bev! ....LOVE your bunny tag with pink stripes...darling!then the rest of the card with the ME dies that I could just use over and over ! Love the second card with the black trim...perfect!
I have a MAC and love it! It all goes together with my iPhone and iPad . Mine is getting old and I hope to replace it with another Mac. When needed.

What a cute couple of cards! I love the spring time/Easter look of the bunny card and the Polaroid sure brought back memories of instant pictures. Of course, pictures are instantly on my phone now, so I guess the folks at Polaroid were on to something!

Now as for your computer I've been using a Windows 8 PC for a couple of years now and if you use the "desktop" view it's really the same old Windows that you know and love/hate. The "modern interface" (the one with the tiles) is more suited for a touch screen PC and since I don't have one of those I don't use it. My old laptop was Windows Vista, I use Windows 7 at work and when you get down to using them, there's really not a big difference between all of them.

Good luck with whatever you decide!

I can't answer any of you PC questions my friend. I LOVE my HP with Windows 7 ;)
But I do know that I LOVE your cards today!
Love the soft pastels on the first, and the more bold graphic look of the second!
Hugs to you!

Mac every time! I'll email you a long list of pros and a (very short) list of cons, and my experience of transferring data and then using the Mac. Can't live without it.

Love the sweet bunny tag with that gorgeous background, and the subtle pattern on the camera :)

Bev, Love your cards and the super adorable tag. We had an HP, ordered a new one and there was a serious problem with the video display so I returned it versus waiting 3 to 4 weeks for a repair. I never could get it to turn on. I bought a brand called Asus at Best Buy (felt better about walking into the store), but really wish I would have bought a mac. My 14 year old has one and it is simply so much more reliable!

Love both of your cards...they are so much fun!

I'm a mac girl at home and pc at work. I really love working on a mac...I'm so not techie.

Boy that's a hard one! Computers, I love HP myself and our first one lasted forever! I was sad to see it go too. We have all went to laptops around my house. Hubby has his, which is an HP, Youngest son got a new one for college, and it's a Dell Alien Ware. You know they need lots of room for gaming and he needed a good one for a CAD program. This was a very expensive computer and he didn't get the top of the line Alien Ware-but still over $4,000 which surprised me that his dad bought it for him. It was custom built, thus part of the expense. My laptop is an HP too but it has Windows 8 on it and I'm not a huge fan of it either, but it is there so I'm living with it. Slowly and I mean very slowing getting used to it. Still have to ask DS some questions. I think having a smart phone with apps helped me some. Key word...some. lol You really need to get a computer that has the features your need on it. They will usually ask you what are you going to use it for. Our son helped to pick mine out for me. I wish you luck with finding a computer that you will love again. There are just so many to chose from anymore. I love your cute tag Bev., that horse is adorable! It's so bright and cheery too. Your bunny card is adorable too, love that little bunny and the papers you used. Those tiny heart are so cute. And the insta camera card is so fun!! I love that it is a birthday card picture coming out of the camera. So fun and so cute! Hugs, Brenda

Both cards are just so sweet. I love that adorable little bunny, just so stinin' cute. Good luck with your computer issues...no fun when they start to die. Miss you lots!

Bev both are fantastic! I love your tag, all those patterns, the flower background is so pretty--enjoying your froo-froo! Love the birthday card with the camera! Thank you for sharing at Tag You're It!

Oh Bev, your cards are so delicious ... fun and whimsical ... and fabulous and retro (in that order!). Sorry about your PC problems ... you know I'm not at all techy, so can't help with any comparisons ... but will say my Dell laptop with Windows 8 works for me (the amount that I know about anyway!!). Thinking of you, my sweet friend. Bisous Bisous Anita :)

Girl...you've been busy crafting up some mighty awesome creations! The bunny tag is seriously my all time fav "Bev card"! The offset hearts are amazing! Love the file folder tag. Soooooo perfectly baby!

Using vellum for the Polaroid print - clever as ever! Fine, fine job fussy cutting! I was so sure that you used dies! Another creation that made me "smile" for the camera!

Oh a visit to your blog brings such smiles! Love both cards. The cute bunny and the fun camera! You are a wiz!

Both are gorgeous. Thanks for joining us over at Tag you're it.

Oh my...how sad your poor computer has shifted from purring to groaning (sounds like my mom's furnaces *grin*...and how happy I am they've been replaced with new ones!). You've received excellent recommendations; isn't it awesome that no matter what we need, someone in this fabulous community will have answers (I'm looking for an ultra-fabulous chocolate chip cookie recipe...). Your cards: froo froo fantastic on the first; camera classic clever on the second. Love 'em both!
Hugs~c

Both your cards are so pretty. I love the tag card because it is pretty and cute with soft colours, pretty flowers on the background and the bunny. Great take on the challenge tag. I am so happy you played along Tag You're It challenge.Thank you very much.

So fun, love that the first one looks like the bunny is going to take flight! Thanks for joining us at Tag You're It Challenge.