How's that for a sassy title?! I swear that I'm going to get things done earlier this coming Christmas season, so that by the first of December, I'll be nearly finished with everything (hahahahahahahahaha). Yeah, that'll happen...and I'll be taller too! Personally, I'm still in recovery mode. After several days of cooking and cleaning, then celebrating and more cleaning, I was way more than ready to spend time in my craft room. Heck, I even made a card! I made several in fact, but I'm only going to post one today. (Come on back January 1st to see at least one of the other cards I completed today.)

This card was made for my granddaughter Lizzy. She's a junior in high school, and was elected to the National Honor Society. Naturally, this calls for a card! Lizzy and I have a really special bond, and have since she was a baby. We've always liked to play, and there were times when she was younger when she'd call and ask if she could come and spend the night so we could be silly together. I can still make her laugh. And she always makes me smile. Have to tell you what I did this Christmas Eve. She'd asked for some Star Wars Vans shoes, and while they were a bit above our budget, grandpa and I decided to go ahead and get them for her. Lizzy also likes peppermint candies, and I thought I'd get a couple of bags to put under the tree for her as well. Then the mischievous side of me had an idea...and I knew she'd laugh out loud. I took the shoes out of the box and put them in a gift bag. Then I filled the shoe box with the bags of candy. On Christmas Eve, I handed her the box first. Her eyes lit up as she unwrapped the box. Her look of pure happiness changed to bewilderment, and she uttered a "Wha.....?", followed by gales of laughter as she opened the box and found about two pounds of candy instead of the shoes she so wanted! And her family roared! I handed her the gift bag and I swear that before I sat down again, those new shoes were on her feet. We all had such a good laugh. She and I chuckled about it all night long. A glance at each other brought smiles and new laughter about my little prank. I think she'll always remember this Christmas! I know I will. But I digress, don't I?....Card. You're here about a card. And so you shall have it... 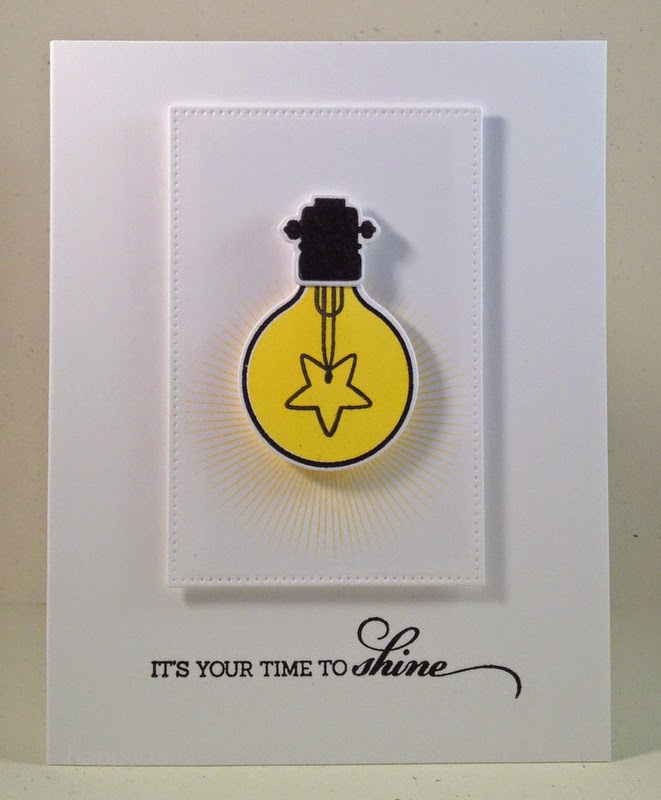 DH gave me some new stamps and dies for Christmas (well, alright...I bought them for myself, wrapped them, and signed them from him...). They're from Mama Elephant. The other stamp I've used here is the starburst behind the lightbulb; it's from AE. The focal panel was cut with an MFT die. Versafine black ink, and Colorbox yellow. Thought I'd play along with CASology this week too. Here's their cue card: 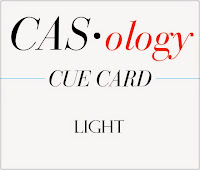 Pretty sure my card fits the bill. And with that, Happy Boxing day and happy dances everyone!

Ha! Love the story about your granddaughter's present. That is too funny...and exactly something by family would do to each other. She is definitely well deserved to keep get this fabulous card. Big congrats on NHS!

I can just see your face as you watched your prank unfold on Lizzy's face! Good job, you, and good for her for loving your wonderful sense of humor! Your card? Only absolutely perfect for CASology!! Happy New Year!! Hugs, Darnell

Nothing beats the love [and fun] between a gramma and granddaughter! You are making awesome memories for her -- love your card too!

super sassy title.
I'm with you on starting things earlier.
awesome news about your granddaughter...the card is perfect.

Love your title ,and we are in recovery mode too! Congrats to Lizzy and sounds like a fun little trick. Nothing like a bit or tons of laughter.
Darling CAS card.
We have a big birthday party and then I need to get a post up its been over a week... Just too busy!
Hugs and Happy New Year!

Lol your title got me there for a second. And such a special bond between you and your granddaughter. Your card is perfect for the challenge. Happy New Year, Bev!

Awww, I loved hearing about you and your granddaughter and the shoes! How fun!! I have a special bond with my one granddaughter like that, only she live far away. I so wish she could call me up to come spend the night, but she only gets to stay when they are in visiting. I take advantage of that time though! Congrats to her for getting elected into the National Honor Society!!! My youngest son had that advantage but wouldn't take it, I was so mad at him. lol I love the card and love that you got some new stamping goodies even if you did buy them yourself, at least you got exactly what you wanted! Hugs, Brenda

What a fabulous post, sounds like you had the most wonderful day with your family. And isn't it just perfect when our hubbys know just which stamps and dies we 'need' (wink), love your card Bev and looking forward to the next installment at New Year!

I love your Christmas story. You sound like such a fun Grandma. And, your card--just stunning. I love that you bought your own gift. I sort of do that, too. Only I skip the wrapping and the tree. But, I always get what I want. Thanks so much for playing along at CASology and big congrats to your smartie pants granddaughter!

Oh, what a fun card, Bev! I think your granddaughter is going to love it, too! How wonderful that she has been elected to the National Honor Society...bravo!!!
Thanks so much for sharing the details of your Christmas holiday with us...it was really fun to read :)

I just want to say watch your back, Bev. The next Christmas prank may be on you. Go ahead. Ask me how I know. ;) I love the you have such a special bond with your granddaughter. I also love this card and think it's perfect for a NHS inductee.

Just goes to prove my theory that you are THE best grandma in town! Giant holiday hug to you, Bev. I'm sure you enjoyed Christmas with your loved ones. I wish you and DH a wonderful 2015 - happy and healthy of course.

Love this story and I'm so glad you have Lizzy to keep you smiling! : )

This card is amazing as is the honor she has received! Beautiful job.

Oh this is BLISS Bev, pure CAS Bliss!!!!!! Thanks ever so much for a wonderful year and I wish you all the best in the NEW YEAR!!!!

Oh, its beautiful! I love the way you've combined all those stamps - they look perfect together!
And everyone could use a laugh - your story brought a smile to my face too! Wish you lots and lots of years together with your grand daughter! :)

Such a fun card for the cue word, but not ready for next Christmas yet. I don't ever want it to creep up again like it did this year!

Your bond with Lizzy makes my heart smile, as does your little swap-the-shoes-for-candy' story! I'd love to have seen the look on her face, first with the 'whaaa...' when she opened the box, then again when the shoes appeared. Cherished memories, indeed! Your card: 'brilliant'! Love that your husband knew 'exactly what you wanted *grin*
Hugs~c

How brilliant and fun, Bev ... what a picture you conjured up for me ... and sounds ... I can just hear those peals of laughter! Lizzie and Grandma are so lucky to have one another ... what a special relationship! What a dazzling card too! Sharing recovery mode with you, sweet friend! Bisous Bisous Anita :)

What a wonderful memory you've created for Lizzie! You'll both treasure it! Love how your light is 'glowing' - thanks for joining us at CASology this week, Bev!

Congrats to Lizzy on making National Honor Society! Your card is perfect for the occasion and I love the starburst you added behind the bulb. Thanks for playing along with CASology this week!
And our hubby's are cut from the same cloth! Mine gave me some money and sent me out to buy my gift. When I returned with a bag of crafty goodies the cheeky man stapled the top of the bag shut, handed it back to me and said, completely deadpan, "Merry Christmas." Needless to say I wrapped the goodies myself but I made him sign the card! Ha ha!

A great fun graphic card. Thank you so much for joining us this week at CASology

So glad to hear I'm not the only one shopping for myself each Christmas! (Needless to day, I am never disappointed!) I love your card, perfect for CASology this time around...and I especially love the story of the bond you share with your granddaughter. She will treasure those laughs and likely share the same bond with her own granddaughters someday! God bless you both!

Sweet and charming family - LOVE that you can get away with teasing and tricks at Christmas!!