DH wanted to run a few errands this morning, and as he's not driving anymore, that means I take him. I don't mind, it can be a nice break in the day. After a couple of stops, we headed for the grocery store. He only needed a couple of things, but while I was in there with him, I ran into three friends! Why is that? While I stood there talking, he checked out, and came back for the keys so he could go to the car. It must be time to make a few coffee dates and reconnect with some of those friends. That's probably why God put those friends in my path this morning. And what better excuse for a good cup of coffee, than chats with friends! I like the idea! Will be making some calls and sending texts later. : )

Bless her heart, our friend Darnell has found another challenge. Not only did she find it, she's GD this week at Words 2 Scrap By. Passing the link along so you can play too. This week's words to live by, are "Oh The Places You'll Go." Who doesn't love Dr. Seuss?!! And while we're on the subject of challenges, I thought I'd find a way to play along with the Lawnscaping Challenge, where we're directed to emboss. Either heat or dry. Went with the dry on my card. Imagine...I managed to make one card for both challenges! 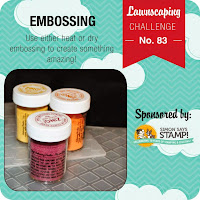 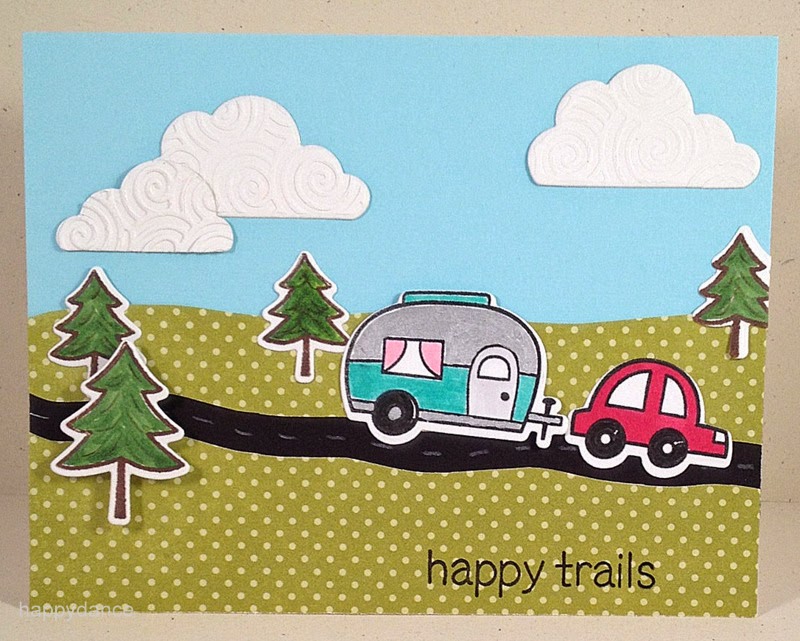 There's a Neenah white base, and all of the other bits of paper are scraps! You'd think that as much as I use scraps the two boxes would be near empty by now...not so much! I used an LC embossing folder for the clouds. All dies and stamps are from LF. A few different markers for the coloring, including Copic and Promarker. An SU white colored pencil for the road lines, and SU ink for the sentiment. I think that's about it. Gotta go haul the vacuum out now (crap!). Happy dances everyone.

Your card makes me wish I was in that little red car on my way to happy holidays!
So cute with that fun green polkadot fields!
CUTE!

awww what a sweet scene, love the happy colors and the polka dot landscape :)

Your card makes me so happy Bev, I wish we still had our travel trailer. Such good camping memories with our kids! Awesome embossed clouds!

Goodness, but your cutie-patootie car+trailer has me smiling, wishing for a camping trip (except I don't like camping for even a nano-second...long story...so I'll exchange it for a road trip, with a vacation rental at the destination. Whatever the case, love the sense of 'journey' you've sparked! Meeting up with your friends for coffee: YES! I'm envious! One of these days...I'll be asking my husband to be checking out bike races in your part of the US! Meeting you IRL is on my 'must do' list! Oh yes...drive that car and trailer over to Addicted to Cas (not sure if this "is" cas, but it's so darn cute...) Hugs~c

Those kind of trips to the store always leave my husband saying DO YOU KNOW EVERYBODY HERE??? I love this sweet little scene, especially those embossed clouds!

Adorable card! Love all the little details, especially the texture in the clouds.

This little card is so darn cute! It is bright and cheery -- and makes me smile wondering where this happy trail is headed.

What a perfect scene for our Oh, The Places You'll Go challenge. Thanks so much for joining us at Words 2 Scrap By!

Cute card! I love that you embossed the puffy clouds!

My favorite part? Polka dotted hills! Squee!!!! This is such an idyllic scene, Bevie, especially in the US with all the beautiful places to explore and camp. We did a ton of that in our day and I always enjoyed it right along with the guys!

Thank you so much for responding to my reminder about the Words 2 Scrap By challenge! You are a sweetie!! Hugs, Darnell

That's a "sweet" card! Fun use of the colors and a cute playful layout. Your happiness just shines, Cheers

Awesome use of scrap papers! This scene is so, so cute! Thanks for playing along with us at Lawnscaping!! :)

Oh, this is so sweet! I love the little scene you created here!

This is just adorable! What a fantastic scene!!! LOVE! Thanks for playing along with us at Lawnscaping Challenges!

The little Boler camper is looking so totally retro sporting the aqua and pink colors! Great texture on the clouds and a sweet, sweet scene can mean only one thing...Winner,Winner!

The times that I have a happy coincidence of running into friends are usually those times when I haven't even showered and just planned on running in and out!!! I'm glad it was a happy time for you! I love little camper/trailer scenes. I grew up camping so this card brings back wonderful memories!

What a perfect entry for the Words 2 Scrap By challenge! Love that cute trailer and your polka dot grass! Thanks for playing along at W2SB! Good luck!