It's mid afternoon and I'm on a roll. I'll get supper started pretty soon, then it feels like I should play some more in my craft room. But for the moment, I'll post these cards, and then decide what to make next. I've got cards for a few challenges, but the one I wanted to get done first was the "Far Away" challenge over at Addicted to CAS. My dear friend Anita is Guest Designer there, and so I wanted to be sure to jump in on that one. I've also got a card for CASology, and one for The Card Concept. 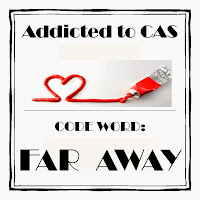 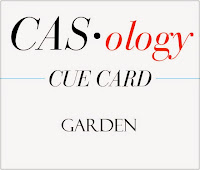 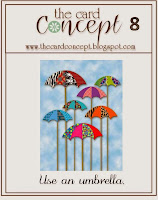 Up first, is my card for ATCAS 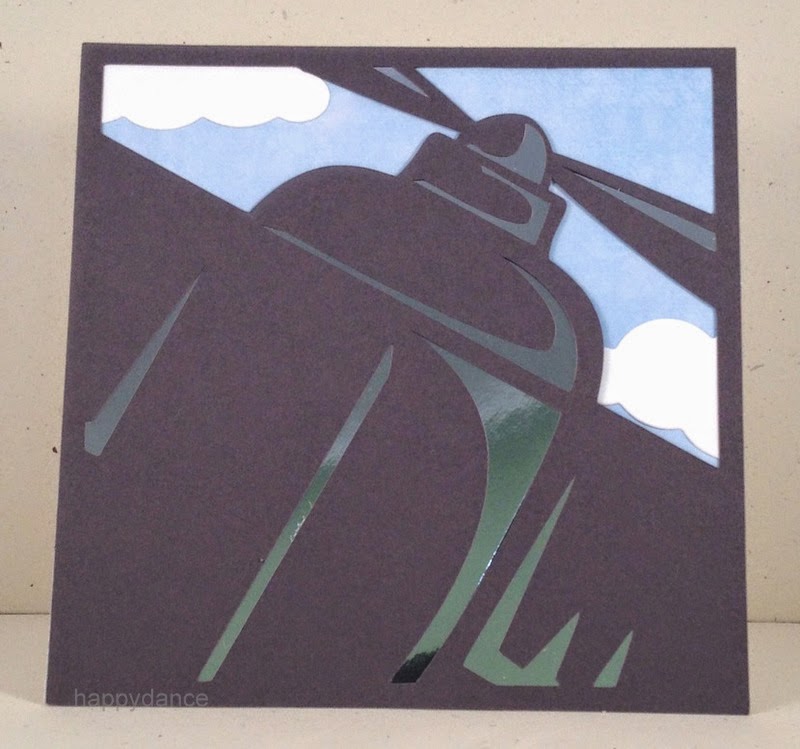 It's a square card and in case you can't tell what this is, it's an airplane...or at least a section of one. The sentiment inside reads, "Let your dreams take flight". I cut the plane tile using my Cameo, and inserted shiny silver paper (from Michaels) under the body of the plane. Here it looks green because of the reflection of my living room walls. There is a snippet of blue for the sky and some MB die cut clouds. The gray paper is also just a scrap.

Next is the card for CASology: 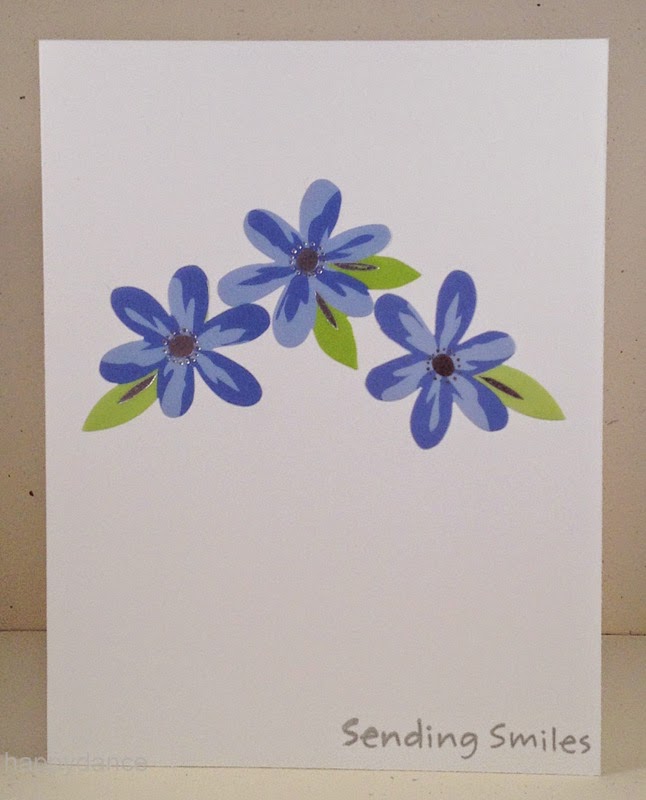 Talk about CAS...this was sooooo fast. I had made another card, but once I looked at it with a critical eye, it just wasn't CAS enough. Back to the drawing board....And while searching for something completely different in my flower sticker box, I ran across these. They're from Sticko. A sentiment from MFT done in Colorbox silver ink, and TaDa! Done!

And the last card for this post will go into the Card Concept Challenge. Had to think hard for this one. I wanted to be different. First, I thought I'd use up all my little flowers with the rhinestones on them, you know, cover the whole umbrella...nah...(I think Mr. Mojo was trying to be snotty on that one...). But how to use an umbrella in a 'different' way... It's not CAS, or CAG, I think it's a CAL card. See what I came up with... 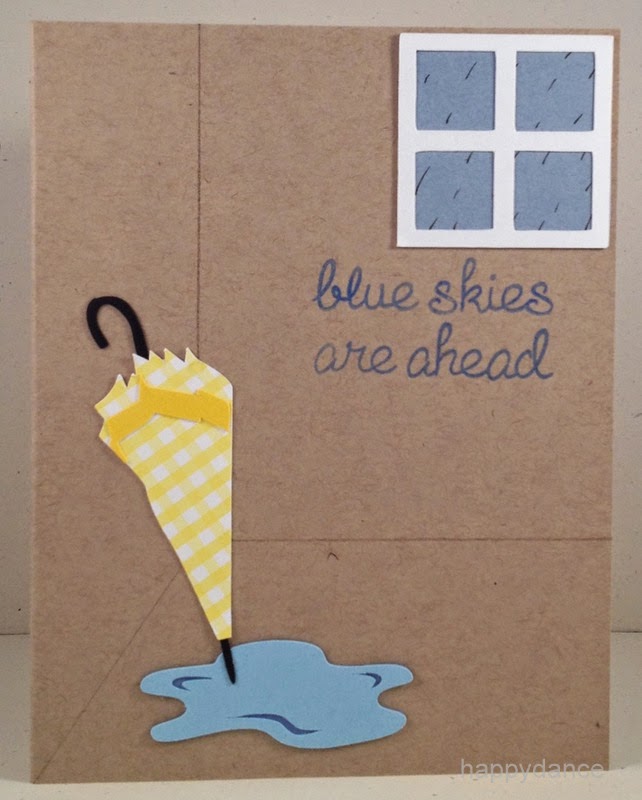 I cut everything with my Cameo once again. The stamp is from Lawn Fawn and I used some Studio G ink. The 'room' was drawn with an SU water color pencil. Scraps for everything except for the base, which is Gina K. kraft. So that's it for me for this post. (I do have another card, which I'm totally in love with, but am saving that for a special occasion later this summer) Five cards before 3:00, is enough for now. So with that, go watch the rest of the Cubs game as they celebrate 100 years at Wrigley Field today. Or just do a little happy dance!

These are amazing cards, I just love the ideas on ur first n third card. They are pure brilliance, the far away card wow! Love the shiny metallic look u created for the airplane :)

Three fabulous cards Bev. No doubt that you are on a roll. I love the floral one the most, but wow! Love coming by your blog for inspiration

5 cards before 3, way to go. And send some of that Mojo my way. The plane card is so artsy, and the umbrella one is a unique way to present it.

OMG the airplane card is fantastic.

Hey you...send some of that MOJO my way! These cards are sooooo amazing!

Your airplane card is beyond clever and creative! What an incredible idea! The metallic paper totally 'shines' and the wee peak of clouds & sky - genius! :)

Sending Smiles...stickeroo perfection - plain and simple gorgeousness doesn't get any better than this!

And then there's your 'jaw hits keyboard' umbrella card! The gingham umbrella, in a wee puddle of water, leaning against the wall in the mud room with the wind whipping the rain against the window...HOME RUN! You were striving for different - mission accomplished!

Holy moly that airplane is amazing!

Oh wow Bev these are just awesome! That airplane is fantastic and the other two - fabulous!!!

Oh my my my...you have been busy and I love each and everyone one of your cards! But that airplane is simply amazing, reminds me of the ride in Disney's California Adventure called Soarin' Over California...so fun!

WOW, what fabulous cards you've created, Bev! Love the creativity on your 1st & 3rd card! AND, I love the darling blue flowers on the 2nd card! Well done!

Oh wow, you really did show Mr Mojo who was boss!! Three cards - all so different and all so wonderful. That's one of the things I admire about you Bev, you can create any style of card.

You really are on a roll!!!! Lovely abound! Thanks for joining us at CASology!!!!

An awesome aeroplane, and a brilliant take on the Code Word!
Thank you for joining us at ATCAS - Sylvia x

Hi Bev, and what a bevy of beautiful cards ( sorry about that ) each one so different and so inspiring. Thanks so much for sharing with us at ATCAS just love that plane.

You are on a roll,indeed, with three unique, fabulous, WOW cards, Bev! Love the plane 'snippet' of the first, the pretty flowers of the second, and the 'scene' of the third. Totally awesome!! Five cards before 3 adds to the 'impressive' factor! Hugs~c

wooowww I wanna see your card for the CASology because I have seen there and wanna look closer and I love all your cards the first one has a brilliant Idea with that shiny metallic look love it as a manly card and the flower card is cuuteee love the simple colors and the arrangement and the last card I love the idea and lovely umbrella love the scene you did...great blog post...hope you like to see my card for CASology Garden..hugs from Germany, Monika

Um ... wow, Bev ... where to start with the wow-ness? From the top ... oh my goodness, that cool, clever and oh so creative plane ... there's such a 1930's art deco feels to it ... so awesome! Thanks so much for the shout out ... and for playing along with ATCAS! Your blue blooms ... they're singing beautifully to my CAS loving heart ... delicious! The brolly scene ... so brilliantly staged, so perfectly put together ... conveys so wonderfully that uplifting sentiment! What an inspiring visit, my friend! Anita :)

Love these Bev! I need to get my cameo out now!! The first one is my fave- such a fantastic idea- you could tell what it was immediately. Love the idea x

Wonderful cards! I especially love the second one -- it's so sweet & pretty!

Wow! I love them all... but the 3D effect of dimension you created in the last card are just brilliant!

Barb you are amazing at the challenges this week. Love both your cards. Thank you so much for sharing with us at CASology and the Card Concept!