Thought some of you would like to know that DH's BIG doctor's appointment went well, and for the immediate future, there's no surgery scheduled for him. He still has to make more improvements, but the doctor was glad to see some of his issues have resolved. That's not to say that late Fall or early in the new year, surgery won't happen; it still could, but for now he's been granted a reprieve. He has a test (another one...) in late September, but at least it isn't surgery! We were both happy with this news. Thank you for all of your kind comments, thoughts, and prayers. They've worked! Blessings heaped upon you all!!!!

Because I got "too" happy about DH's news, I had a four-day run of migraines. Got off my even keel track, and paid the price. But it was worth it... Got busy making birthday cards yesterday and sending them out, and then decided to make a couple for some challenges. Wanna see? Thought you might...


First up is a card for SSS's Wednesday Challenge, City Crafters, and Cupcake Inspiration. 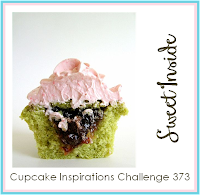 Thought this might work for a little girl's birthday, and heaven knows, we have lots of those in our family, lol! 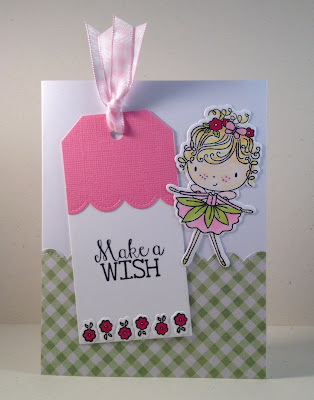 That little fairy and the flowers are from MFT, and the sentiment is an AE stamp. Lots of scraps, a SC tag die, and a ME scalloped edge die. Some Copics and a bit of ribbon. She's pretty cute.

Next is a card for Stamplorations Challenge, and I've chosen to go with the sketch. I'm also sending this off to Tic-Tac-Toe, and have chosen the far right row going down. 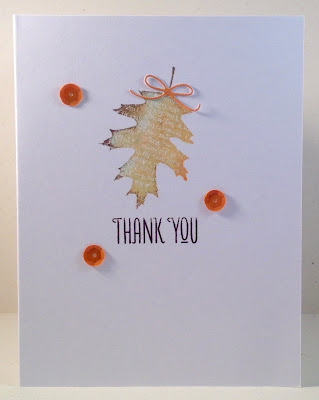 Yay for good news, Bev! I am so happy to hear that your DH does not need surgery (at least for the time being). Good, good news! I will continue to keep him on my prayer list!

So nice you found some time to play...your cards are adorable and sweet! I love that fun girl image paired with green gingham and pink accents. Adorable!! I REALLY love your Tic-Tac-Toe challenge card, that single leaf is so perfectly inked, the die cut bow is precious, and the perfectly placed sequins are a delicious fall color!

Hope you have a great weekend!

Back-to-work followed by traveling to Mom's has seen me falling behind in sending you a note; definitely on my agenda! Excellent news about DH...but too bad that you were saddled with migraines! Sending hugs that they've disappeared and remain that way for a good long time! Now, these cards of yours: stellar! I'm completely smitten with your darling fairy; some serious cuteness and pretty happening there! And your leaf: beautiful solo performance on the stage. I have that set and oh, how it needs some attention! Thrilled to see you over at Cupcake Inspirations! Today, heading downtown to see the new hockey arena with my brother and the kiddos...should be a blast (as the last couple of days have been!)
Hugs, love and misses~c

I love thinking of you playing with paper in the midst of a storm. You inspire me to keep going when I don't really feel like it! God has gifted you in so many ways. You bring Him glory when you grab hold of His garment and press in!! : )

Praise Jesus for a good report! we will continue to pray that no surgery is required and that those headaches are a thing of the past!!!!

Your first card is so stinkin cute! I love especially the colors and design you used! Your second card is a WOW card! : ) Elegant in it's simplicity friend!! Your coloring on that leaf is amazing!!

A very sweet and pretty card. Thanks for joining in at City Crafter. (The leaf card is great too).

What lovely cards Bev!! I especially like the simple, leaf card. It is so pretty!! I am sorry that you suffered some migraines after your news. However, that is not a surprise. You were stressed and I get them from that. Glad you got a little "me" time to make some cards!!

So happy to hear you good news (and that you are now recovered too)! Love that sweet little fairy with the tag, she looks so so happy and I know that any little girl would adore this card!

So glad to hear that your hubby is on the mend, Bev! Hope your migraine is over by now. Your fairy tag is absolutely darling! Love the soft coloring! Thanks so much for playing Simon Says Stamp Wednesday “Anything Goes” Challenge! Beautiful colors and design. Well done!

So pleased no more surgery foR DH at the moment but sorry to here you suffered with migraines, hope you take care of yourself, be kind and take some 'me' time. Crafting counts! And I see you have been busy. I love your sweet girl card, adore the gingham paper. And naturally your CAS Autumn card is right up my street x

Loved, loved, loved getting to chat with you about DH and of course, as always lend an ear to me too. Your faith is incredible Bev and I'm so happy for your family. Glad to hear you are on the rebound and creating away. I'm with Sandie...love the CAS fall card...and oh how sweet is that little girl card! Adorable!

That is such great news about DH Bev! I know a surgery could still be down the road, but at least it is down the road for now!! And knowing that DH is making improvements is wonderful as well. We will take it!!! Now I hate to hear that you had a four day run on migraines, no fun at all. I don't miss them!! Wish you were free of them too! And maybe one day you will be-that's my prayer for you. I love that sweet little fairy birthday card!! How cute it is, I have passed over fairy stamps and just realized that I shouldn't with all the little girl grands I have! Your leaf thank you is a fabulous CAS card as well, love the simplicity of it and that leaf almost looks real! Glad you got some crafty time my sweet friend!!! Hugs, Brenda

So nice to see you back in blogland pal! Good news and happy, happy cards! I adore the tag card - specially the sweet little flowers at the bottom of the tag and how you flipped one up, one down! Second card...well, you KNOW that this one would make my heart skip a beat..or ten cuz it is GORGEOUS!!! The texture and colors on the leaf are divine!

Two wonderfully great cards! And so HAPPY to hear your husband's great news!

I'm glad to hear the good news about your husband, but sad to hear that you had to deal with migraines for four days! I can't even imagine! Hugs, Bev!
Both of your cards are wonderful! That little fairy is adorable! And I love your fall leaf -- it's so simple and elegant and perfect!

What a sweet card for our challenge! Thanks so much for playing along at CCCB!

Great news about DH's reprieve, Bev - bummer about the migraines though :(
Love the sweet tag card - that fairy is so cute! And the tiny bow die looks great on the beautifully coloured leaf.
Thanks so much for your lovely comments on my blog too :)

So happy you have wonderful news to share about your sweetie, nice to have all those prayers answered! Your cards are fabulous...love the one with the sweet little lady, just adorable my dear!

Hi Bev,
Always great to have good news. Sorry that you had to endure the migraines. Love your cards. I love stripes ... the one with the primary colors/striped panel is precious. And, the one with the leaf really caught my eye. Take card and enjoy lots of happies!
Hugs, Marilyn

That's not fun if the good news about your hubby gave you migraines!!! Glad you are feeling better and being creative! That sweet tag card is adorable and the CAS Thank you card delightful with all that white space and a few sequins sprinkled around.

You already know how delighted and thankful I am about John, Bev ... please God things continue on the up! Hope those migraines are well under control by now, and that you're enjoying a little 'relief' in all senses of the word! Your sweet fairy is just adorable, and so magical for any little girl .. and your single, striking, splendid leaf ... what a stunner ... love it ... muchly! Miss you, my dear friend ... big hugs and bisous, bisous, Anita :)

So glad you've had some good news about DH's reprieve from surgery for the moment. Hopefully it will stay that way.Unfair that the good news was followed by migraines for you. Such a sweet card for a little girl! Great use of all the colours in the inspiration. Love the beautiful blending of the colours in your leaf. Lovely CAS card.

Both cards are fabulous! Thank you for sharing at STAMPlorations.