I'm not talking about the G-A-M-E that will occur this evening. What I will say, is that one team will be wearing red and white, and is from the capitol of Wisconsin. Most of the time I'll be watching from behind my hands, or listening from my craft room, because that way, I won't jinx it. Now. Onto other news!

My sister texted me yesterday to tell me to call her as soon as I got the message. Immediately, I thought that something had happened to dad. Nope. He's fine! (whew!!) Turns out she'd gone out for Easter breakfast with her kids, and she was given the second best Easter gift ever....(we know what the first best is!). Not only are her son and dil expecting a new baby, IT"S TWINS!!!!!!!!! How cool is that?! I'm so excited for them. My nephew and his lovely wife are awesome people, and really good parents to sweet little Miss Emma. Babies are just about the best news, aren't they?! *sigh*

Naturally, I had to make a card for the expectant parents. Twins calls for one, don't you think? Had a ping last night, and wouldn't you just know it, the card turned out exactly like I saw it in my head. Love it when that happens. Took like 5 or 10 minutes... And, I found a challenge to pop it into too! Less is More would like us to use Predominantly Black. Sounds weird when thinking of a baby-to-be card, but just wait till you see it.

Let me know what you think.... 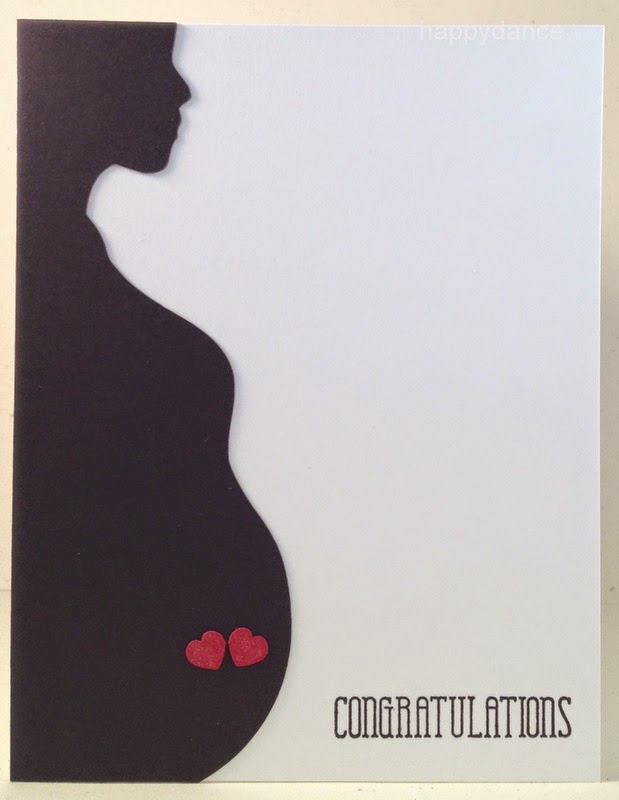 After starting with a Michaels white base, I used scraps for the rest of the image. Cut file 29123, which I sized and lopped off to get just this section. Punched out a couple of hearts for the babies, and added a smidgen of WoS to them. An A&E sentiment with Versafine black ink, and done.

Next card is for MFT's Sketch Challenge. Nothing came to me last week, but today I just played around with it, and came up with this card. 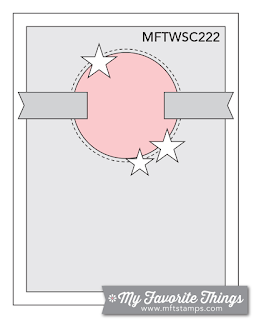 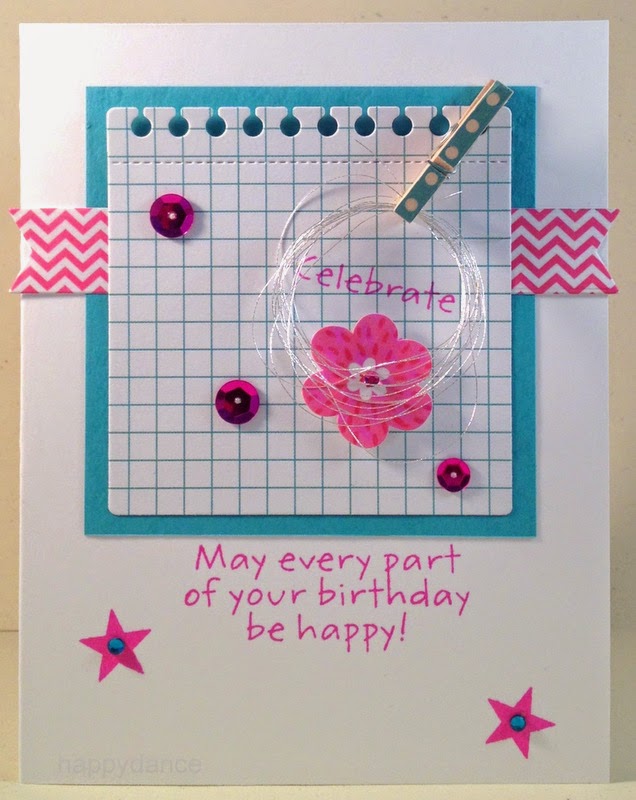 Michaels white base with a scrap of chevron, a scrap of blue cardstock, and a bit of paper from Miss Geri acquired at the BABES adventure. All the dies are MFT, as are all the stamps. A few sequins, a couple blings, an old flower sticker, and an SC clothespin holding a bit of silver thread. The Notecard die is actually longer, but after I cut it the first time I popped it back into the die and made it shorter. Hope you all have a great week, and happy dances everyone.

Your cards are both so sweet, but oh my goodness what a fab silhouette!

Twins! That is happy news, and your card is so perfect right down to the WOS on the hearts! Your MFT card would be wonderful for a teen or preteen girl's birthday in this family! I'll be sitting with you tonight!

What wonderful news, too! Twins?! Wow! Your card is absolutely PERFECT for the occasion...a beautiful silhouette and perfect two little hearts! AMAZING!!!

Twins are exciting and I love the little hearts on your card, Bev!

Lovely cards but the silhouette one is fabulous just perfect for the occasion! Twins - how wonderful!

No jinxing...you know where I'll be cheering! :) Love, love, love both cards...the dual hearts! Swoon! Love when what's in your head translates to paper!

wow, both cards are super Bev. I really love the silhouette. Your design is sensational!! Congrats to your nephew! xx

Wow, Bev, both cards look like winners to me! The first one is so perfect for LIM, stunning in it's simplicity! And the second is so fun with all the different elements! Love the pin holding the thread!

I think your twin card is genius, Bevie, and so in the running to win at LIM!! I'm thrilled for everyone; it's the coolest thing!! I love your bright and exuberant second card, too!! (Don't look, but our guys are actually pulling AHEAD right now!! Whoot!) Hugs, Darnell

If my green and white team can't win, I hope your red and white one does, Bev. Your expecting card is just perfect. Congrats to the couple. Twins are double the work and double the joy. Just ask how I know. ;)

How exciting...twins! Your card is beyond amazing Bev! You could sell tons of these two little hearts love it! We are watching the game as well GO WI!!!!!!
Your second card is darling too!

Twins....so exciting! And your card is about as cute as can be...I love it! And your second card is so fun, love those vivid colors, just so festive for a birthday.
Now on to baseball...so sorry your cubbies lost today, my Giants are playing right now, 1-0 Giants...my fingers are crossed that we win!
Again and as always, love your cards. Miss you lots!!!

Oh- I just love your baby card! What a great idea for twins! Big congrats to your sister and family. Babies are always good news!

I have to tell you that I stopped and stared at your Twins card for quite some time. It is sheer CAS perfection and I am SO jealous of how your brain works. That card was definitely added to my Pinterest board for future ogling! And I love your springy second card with its twirl of floss and flowers!

Yay ... more little ones in the family ... congratulations to you all, Bev! Genius card ... simply genius ... really, really genius! Sweet MFT card ... fresh and fun and with fabulous detailing! How about Virginia's View (layers and dimension) for this one too? Hugs & Bisous, miss you dear friend! Anita :)

Gorgeous cards as always Bev and I'm loving the maternity silhouette image - it's so clever and striking and a perfect take on this week's challenge.
Thanks so much for sharing and taking part.
Sarah xx
Less is More

I am totally in love with the baby card Bev! Looks so great and is just perfect for the babies to be the hearts. Yes, babies are just a gift from above and it doesn't get any better than that! I also love your take on the sketch, what a fun card, loving the color combo of this one too. Hugs, Brenda

I think I heard that WI lost last night. Sorry about that. But these cards are winners for sure! Love the idea of the silhouette and the bright fun colours for the MFT card!

Love both of your cards, but I must say that your twins card is inspired and ingenious. And, congrats to you family as well--double the fun.

What wonderful news and what a cool card to celebrate the new babies! I didn't watch the basketball game last night but if a certain team wearing red and white had won I would have won my bracket! Tough loss:(

Great cards! Love that graph paper and the clothespin! So glad you linked up at MFT!

Congrats to you and your family. Twins are amazing- there's nothing like carrying two babies..very very special!
Your twin card is just awesome- such an inspired idea!! Love it completely x

Oh, these are both so fun, but I especially love the first one!

What a good idea to use those hearts for the babies... super predominantly black card!
Thanks so much
Chrissie
"Less is More"

Fab cards, Bev! I think the two hearts on the silhouette is a genius idea!

Bev that is such wonderful news and your card is too clever! LOVE it. Congrats to your SIL. Perfect sentiment on your birthday card!

Stunning card! And yes, that is such lovely news, Jo x

Your first card is a master piece such a creative idea :) and double congrats on the happy news !!

What a unique card I really love the two heart babies in the belly :) They will love this card :)

Twins! How exciting! Your card...absolute creative genius! The silhouette is so elegant & creates lovely movement to the two hearts! If this isn't a winner, then I don't know what the judges are smokin'...

The b-day card is totally fun, fun, fun! The whimsical font is perfect for the bright pink & blue color combo! Love the sproinky thread and the the clothespin! Cool paper :) :) :)

Great News!! Babies are always a blessing. Very creative card I love the hearts. I am glad I found you at Less is More challenge blog. I am now your newest follower. Please stop by my blog and say HI. Traci

I love the card!!! I´m a mother of twins and that card had made me so happy!!! Lovely!

TWINS!! Such exciting news, and your card to celebrate the miracle is absolutely darling! Two little hearts...happy sigh! Your second card - with a sketch that had me at 'no can do' - is awesome! Bright, fun, clever...the polka-dot clothes peg is the perfect accessory!
Hugs~c (PS. I was just thinking of Ms T or Mr. C as twins...hahahahahahaha ...yikes!)