For some reason, this past week has been weirdly busy. It seems every time I try to sit down in my craft room, something comes up. Nothing big. And we're okay health-wise, but all those little things that have to be done right this minute keep cropping up, and then it's on to another 'thing.' Those 'things' are beginning to get on my last nerve, however. I just want to craft, visit your blogs, and make cards! *sigh* Life. It really isn't all about me, is it? So I apologize for my absence. I got up extra early this morning, so I could get a few 'things' done and then put everything else on the back burner so I could play a little.

At first when I saw Anita's card over at Muse, I was sure that nothing would come to mind. I don't have a single cone flower stamp, and I wasn't sure if I had anything even close. So I shut the tab and moved on. But my brain was cooking, and unbeknownst to me, it planned a card all out by its own darn self. My brain waited until I was working on another card idea, then went, "PING." We argued. I didn't think this idea was anywhere close to Anita's card. Brain said that her card was meant to be a muse, as in inspiration, and if I didn't post this one, that would be the last idea it would share for the rest of the week. *sigh* I gave in. Obviously brain went with flowers and colors. And don't tell brain I said this, but in real life, it's kinda pretty.... 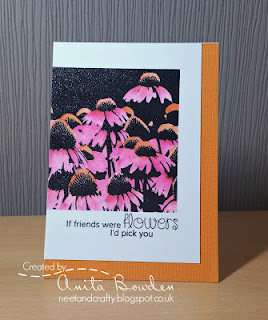 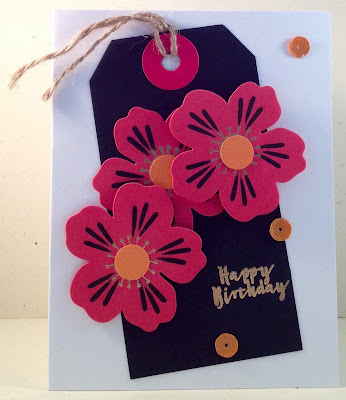 The tag was a RAK from Amy T. The flowers are a sort of NBUS from MFT, and the sentiment is from AE. There's a bit of gold heat embossing, and a few sequins (which really do match the orange flower centers...), and that's about it. Popped up two flowers just for funsies. And I've got to get back to doing a few more things. DH needs to get out of the house, so I dreamed up a few errands for us. You all have a great day, and as always...

Look at your mojo go! What a fabulous take on Anita's beautiful design, love love it!

Love the direction you went!!! I think your take on Anita's card is perfect! The stunning bold colors create dynamic contrast with the black tag! You nailed it!!! Nice wee pops of precious metal colors!

Hope you had a fun 'faux errand' outing :)

Your tag rocks Anita's inspiration, I love those flower die cuts Bev and in the bright pink! YKW is all over me this week. :(

Fun and pretty tag/card! I love bright colors on black.

Oh I LOVE how your mojo works!! Your card is STUNNING!! I love the black tag on the white background. The addition of the pink just POPS!! Totally amazing design!!!!

Such a fun and creative take on the Muse - this is exactly what it's all about, just seeing where the 'ping' takes you! So glad you joined us at Muse this week!

Keep It Sweet and Simple said...

I love this fun and graphic take on Anita's card, Bev. So fun and sweet. :)

Hi Bev, always good to receive your comments. Love your tag with the fuchsia and orange against the black. Loved your story about getting the inspiration ... sometimes my ideas come when I'm on the golf course and/or in the swimming pool!! Hugs!

What a pretty tage card, your flowers are so pretty :)

At least your brain is working, Bev. This is a wonderful take on Anita's card.

Hahaha, you are funny! Darnell has her Hammy, you have your (very opinionated) brain - I wish I would get some help while making cards! So happy you listened to your brain (well, I guess you didn't have a choice with that threat and all...) and shared this pretty card!
And yeah, I know what you mean by those little things - they suck away my time, too!

Such a pretty little tag! And what a fun post to read! Funny how the brain works things out on its own - you just gotta listen to it! My brain is in a freeze right now, nothing much coming out of it - perhaps hibernating and hopefully it will surprise me with some wild ideas soon....

Well, I'm glad you listened to brain because this is awesome! I love those bright and bold flowers and the pink ring on the tag is such a perfect touch. Bright, cheery and perfectly celebratory.

It's funny how are subconscious can keep working, isn't it? The pink flowers pop in a gorgeous, happy way on this tag & card, Bev!

Your brain led you in a super creative and fun way with Anita's Muse card. Great job and glad you posted this card.

Gorgeous take on Anita's card ! Love how you used the tag to make the black background ! And those flowers cuts are so beautiful ! Thanks for sharing and for inspiring.
Izzy Scrap

I love how you just went with your creative mojo....I love where my card took you. Such gorgeous bold blooms and I can clearly see your interpretation.
Thanks so much for playing along at Muse this week, Anita x

Gorgeous take on Anita's inspiration card, Bev! Your bold pink blooms really pop against the black, and I love that you chose to create a tag...it's so pretty!

Your brain did right to take a stand, Bev ... this is such a gorgeous tag ... rich, vibrant and so very pretty ... and a brilliant take on the Muse! Isn't it a pain when 'stuff' gets in the way of all things card making ... there's lots of it around here too at the moment! We both need a stoover (that's a made up word!) to vaccuum it all up, then there'd be plenty of spare time around for us to play to our hearts content! Oh, and I owe you an email ... mea culpa! Thinking of you, mon amie ... big hugs & bisous, Anita :)

Oh, I love what your clever brain came up with, Bev ...good thing it kept on going for the challenge!!!! Such beautiful flowers in the bright pink with the orange centers and a wonderful way to do the black as a tag!!!!! This is such a GORGEOUS card, my friend!!!! WOW, love it!!!!!
Hugz

Cheering and applauding your brain's persistence in niggling - and eventually giving you an ultimatum (too funny!)- you to create your card! The tag and pretty flowers are a fabulous take on Anita's muse, infused with your special PING touches! Beautiful! I completely relate to busy-ness! Back from mom's and immersed in catching up - and trying to get ahead - of DT commitments, as well as in my side-line gig: editing papers for University students. I have three oil-and-gas papers - each one around 200 pages - calling for my attention, and the turn-around time is quick! I'll be editing and crafting for the next few days...and somewhere in there, have to fit in cleaning up for the 'photo shoot' of this place happening very soon! If you have chat time next week, let's do it!
Hugs, love and misses~c (PS. I like Anita's 'stoover' idea!)

I love the way your brain works!! And I have to tell you that that particular set of flowers has been on my wishlist for awhile but it never makes it to my shopping cart because at some point I have to accept that I have too many floral sets. But your card just put me over the top. I love your use of just the die cut with the black and gold accents. The pink and orange are so fun and vibrant. It's truly fabulous!!