It was die cut day here in my craft room. Just couldn't stop. Mostly from my Cameo, but the one I'm still working on has the alphabet dies from MB, and is hopefully, being posted tomorrow! I've gone a bit overboard with cards today and am not even posting all of them. So I'll move on and get right to the challenges these cards are going into without any more nonsense.


First, I have a card for CASology, whose cue card this week is: 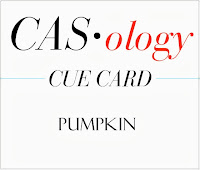 Darnell...I had a ping. Had two other cards going but had to stop and cruise through this one: 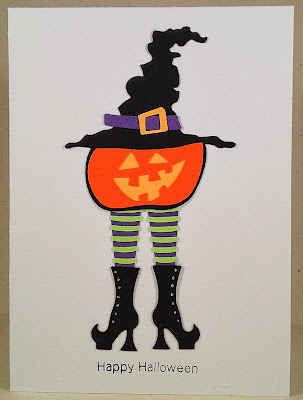 It's going to UW to granddaughter Melissa for Halloween (no duh, eh?!) Everything was cut with my Cameo, and the stamp is from Newton's Nook, (killer perfect stamping stamps, btw) and inked up with SU black. Pretty easy card.

Next up is card #2 for CAS(E) this Sketch. Talk about a fun sketch!! Karolyn Loncon came up with this one, and I think I might have to bookmark this and use it often. Here's the sketch: 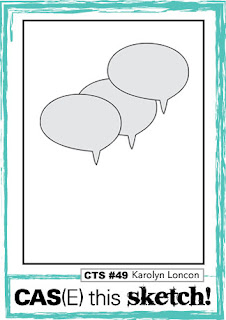 This card is going to another granddaughter, only Miss Sammy is 3. She's so darn cute, and loves ducks. Her daddy thinks she's a bit sassy, but I tell him that she's just like him at that age! 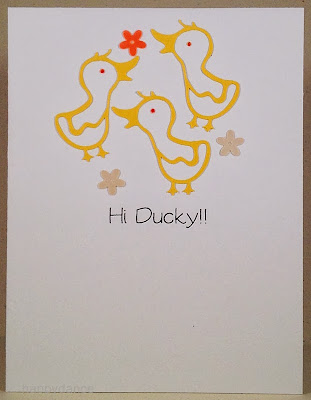 I've made cards for all three of this family of little ones, but am only posting this one. The ducks were cut with my Cameo, and the flowers are actually sequins I got years ago at a scrapbook convention and rarely use. Bookworm font, computer generated. EZPZ! She'll love getting her own real mail!

And lastly, I found this sketch over at CAS-Colours and Sketches. Had another ping, and this card went together really, really quickly. 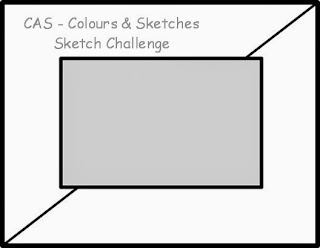 It's for a friend who lives far away... 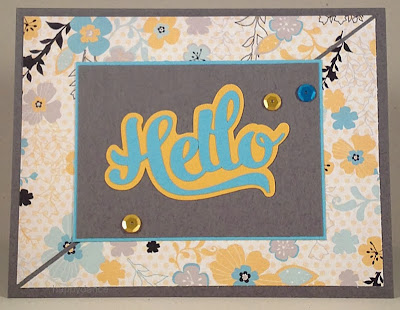 Now I have to tell you that I saw a card made this morning by Wida Miller over at Beachorado. First, her card is awesome, as all her cards are, and I fell madly in love with this cut file. I borrowed her idea slightly. So thanks Wida! An inspiration as always!!
My card uses a dp from a 6x6 pack of Fancy Pants, and all the cardstock is from Hobby Lobby. A few sequins, and whammo!, done!! So quick; another EZPZ card for today, and my last.

I will get to commenting tonight (I hope). Had planned to catch up last night when a YKW hit. First one in about a week....anyway...Happy dances everyone!

Grandkids love getting mail, no matter their age. They'll love the ones you've made. :)

Super cute Bev! Love the ducky's ----And your CASology card, almost had me off my chair!!! Too Funny - really brightened my day.


I think everyone loves getting their own mail, and lovely handmade cards are always at the top of the list!!

Thanks for joining us in the FUN this week at CASology - I always love seeing your cards!

Your Cameo's working overtime today! Love them all (although I may have a slight preference for those sweet duckies!). Your witchy pumpkin made me laugh out loud - I wish my legs were that long! Thanks for joining us at CASology this week!

Yowzers...you're on one heck of a creative roll! Your H'ween card is an absolute hoot! Who'da thunk to put those pieces together and come up with a snazzy little Pumpitch (you know...half Pumpkin, half witch)

Now those duckies...cute as cute can be! Nice to see the Cameo in action! Sweet flower sequins - you have the best 'stash' of stuff ever!!!

I love that cut file! Love the blue & yellow - such a cheery hello! Nice touch angle cutting the mat!

You were a maestro with the Cameo, Bevie, and the pings!! I can't wait to see all the other fab creations you made today if these beauties are a representation!

Sometimes I wonder if those YKWs don't percolate those creative pings you have ~ gotta look at the bright side of those evil things. BTW, I look ezackly like your adorable witch from the behind of me!! (Comes from sitting on my brains all day and night!) Hugs, Darnell

Wow your family and friends are very lucky to have you in their life. Can you adopt me? LOL Seriously, super great cards, each one of them.

Hahahahaha ... oh my goodness, Bev, that witchy-poo-pumpkin is fantastic ... creative, funny, colourful and the most brilliant fun! The ducks for Sammy are so adorable ... don't you just want to see her expression when she opens it?? The hello in gorgeous blue and yellow is so cheery ... and so perfect with the DP! What an amazingly productive day, my friend ... hope the YKWs are staying away! Anita :)

A trifecta of terrific here, Bev! From the adorable Halloween card, to the sweet X cute duckies for Sammy (she'll LOVE them!! And yes, sassy + 3 do go together. Package deal.), and the to the cheery blue and yellow Hello - these are delightful! You're on a roll, my dear friend, a most day-brightening, smile-making roll!!
c

Wonderful cards! I especially love your take on the sketch with the little ducks and how you did your sentiment on your last card!

Wow! You really ARE on a roll! I'm sitting here thinking that a die cut day sounds rather appealing! I really need to do that before more dust collects on my die cutting stash! Good grief.
Love the walking pumpkin! Now that's creativity! :)
Thanks so much for joining us at CASology this week!

You have been busy! Love all of them! So impressed with your ability with the Cameo. I am still learning with a long way to go! Putting a pumpkin on top of witch legs is perfect! So glad to see you at CASology this week!

On a roll! Sorry to hear you had to quit. Your hilarious witch reminds me of Wicked (Loved that show). Now I have a song stuck in my head.

What a busy day you had!! I can't decide if your pumpkin witch is really cute or a little creepy (but that's the point of Halloween, right?) I love your duckies - isn't it great that you can make a card that is just perfect for Sammy! And your fun "hello" is on some of my favorite paper!!

Holy moly I can't keep up with all your amazing cards lately. I love your clever take on the pumpkin cue, the duckies couldn't be any cuter, and am amazed that the last card came together quickly...its wonderful with so many details (my favorite being the small slice taken out of the patterned paper).

My goodness, you already know what I am going to say but I will say it anyway - SO CUTE! I confess the first is my favourite though - quirky and fun! Bright, cheery and happy. Love these cards, Bev!!

LOL! Hilarious! Brilliant take on the cue word! Thanks for playing along with CASology this week!

Lovely card and your ducks are so cute. Thanks for playing along with us in the CAS(E) this sketch! challenge and hope to see you again.

You have been pretty busy! What a wonderful bunch of cards too but that pumpkin with the witch legs is just too darn cute.

You were busy... and I somehow got lost. 3 splendid cards my friend!
♥