It's been quite a week. Or should I say nearly two weeks. The busy-ness is almost done for a bit, but for this afternoon and tomorrow, I am sticking close to home and my to craft room as much as possible. Got the granddaughter through graduation and party; really proud of her as she was the salutatorian of her class. Nice girl, going on to UW this fall. Long day was the party day... My feet were screaming by the time I sat down at 10:00. But it was a nice party, with no rowdies and lots of fun. Made a quick run to urgent care the morning of the party for DH, but he is alright, thankfully!
Spent all day yesterday playing with grandkids in Madison. Let me tell you, they are some of the most fun anyone could have. Took them out to lunch to the Hubbard Avenue Diner. They all ate a good lunch and then we had pie...or in 3 year old Drew's case, "a cookie. With frosting. Please". Grant had his own piece of oreo, and Lily and I split a slice of Mississippi Mud pie. Think creamy thick brownie in a graham cracker crust. She ate most of it...thank goodness! It was soooo rich and yummy. Then I took them to Marshall's to look for books for them. Well, the two oldest wanted stuffed animals ("grandma, they're Not toys, they're stuffed animals!") but Drew spotted a book that he had to have. The Adventures of Captain Underpants.  Later his dad said it was probably the word underpants that captivated him. Who am I to say no to a child who actually chooses a book over a toy...or a stuffed animal?!
And today. Poor me...had to take Jen out for her birthday lunch, and wouldn't you just know, a run to Archivers. Spent waaaaaaaayyyy too much on supplies, but most were for the Disney book I'm making for those three little ones in Madison as part of their Christmas present. The best part of the day is to spend time with a friend. Just talking. Just being. Just perfect. *Sigh*
I haven't had much time to visit blogs, make cards or do any crafty fun stuff. I started with an idea for a card on Friday after I saw the new cue card at CASology, but didn't have time to do much with it. Tried to craft a bit on Monday after the dentist, but was feeling that leftover tiredness from Sunday's party. Today, I just whipped it up. It's for Marilyn. And I'd like to thank you all out there for the thoughts and prayers as she continues to battle with her cancer. The card has to be flat enough to mail, so there are few embellies on it. Besides, the whole concept over at CASology is Clean and Simple... 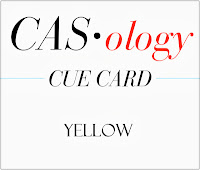 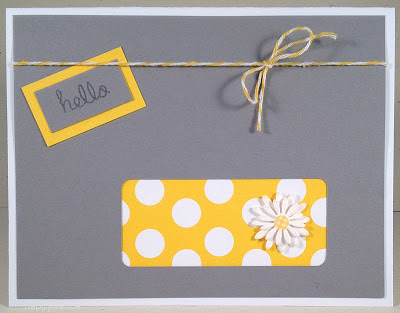 For this card, I've used all scraps out of my two giant scrap boxes. (I swear they multiply at night!!) Except the white Bazzill card base. A bit of baker's twine, Memento London Fog ink, Lawn Fawn sentiment, and a random daisy. And since this has been a bit of a long winded post, I'll stop now. Happy Dances.

Hello my friend ... so happy to have you back and to know you've had such a fun time ... and topped the weekend with a wonderful crafty spend! This is a gorgeous card for Marilyn, the bold yellow and grey are wonderful together ... and it has polka dots too ... yummy ... I just love it! Anita :)

Sweet! Love the white, gray and yellow together ... and the polka-dots - perfect and happy. Great card. Loll :)

She will love the bright & pretty pops of sunshine yellow, especially when she knows how deeply loved she is by the sweet, sweet lady that made the card! Guaranteed to brighten her day (it made my heart smile too!)

I'm tired just reading all that you have been up to lately! :) Glad your DH is okay! Your Marilyn will love this sweet card, Bev! And, I agree - scraps multiply at night! Hope you have a great day!

Whew, you have been on quite the roller-coaster of activities; good to know you'll be settling down for some well-deserved, relaxing card-making time. I imagine your creativity is getting close to bursting! Choosing a book over toys (this is the teacher in me talking): awesome! I've heard this particular one is quite good! Your card, with its cheerful yellow and polka-dots is ever so heart-warming, thoughtful and spirit-lifting - just like you are! Have a super Friday!!
c

Huge congrats to your granddaughter for being salutatorian! You must be so darn proud : ) And great that she's staying somewhat local for college too!

Love your gray and yellow CAS card! I think this is my favorite color combo right now : )

Great to hear about all your celebrations - what a fun time you've been having! I've been out and about, too - not too much crafting time this week, but I'm hoping that will change soon. Love your beautiful yellow (and grey) card - I know that it will be appreciated!

Sounds like you have been having a blast with your family! Such a sweet card for Marilyn too, I am still praying for her and her family.

Bev it sounds like you had such a fun time with your family. Congratulations to your grandaughter. Your card will surely cheer Marilyn up I am sending her prayers. A beautiful card and so perfectly yellow. Thank you so much for sharing with us this week at CASology!