I'm between migraines and running DH to appointments. One for today, and then he's good until next week. I only have a few minutes before he needs some help, but wanted to share the cards I made a few days ago and just haven't had time (or enough pain-free minutes) to post. I started grandson Sean's birthday card, at least in my head, then I saw the ColorQ and used a navy color for the focal point as you'll see. I'm playing along at Muse, and Time Out (die cutting/fussy cutting) for one card, then as mentioned, ColorQ and The Challenge for the other. 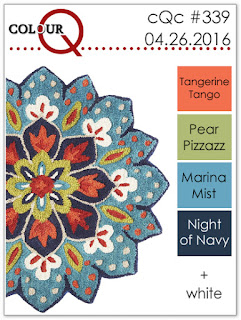 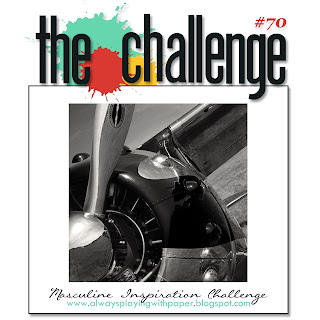 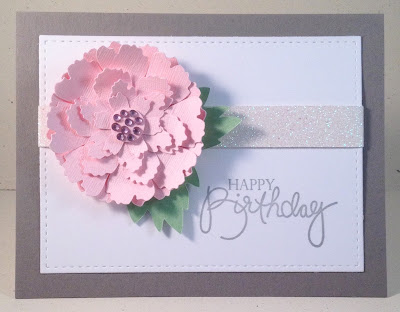 I used a medium gray for the base, and added an MFT panel in white, wrapped with some glittery ribbon. The carnation is a cut file from my Silhouette and I used up some scraps for it. A PTI sentiment in ME Smoke ink. A few blings for the center, and done. So pretty irl.

Next is my card for ColorQ and The Challenge: 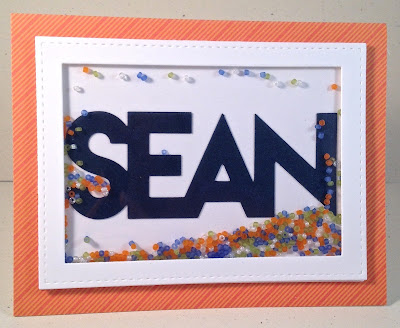 No matter how many photos I took, the "Sean" looks blurry. Must be the acetate containing all those beads.... A chunk of LF orange stripe from their "Into the Woods" 6x6 pad. a white frame created with two dies; MFT & ME. Another cut with my Silhouette using the Lemon Milk font for "Sean." Some perfect-for-this-challenge beads by Queen & Co. Popped up with some foam tape and done. Now I've got to run. Hoping to get some commenting done later provided the head cooperates... Happy dances everyone

Sorry to hear the migraines have been bad again Bev. You have made some beautiful cards. I really like the glittery ribbon behind that lovely flower and Sean's card is absolutely super. What a fun idea to do a shaker for him, Barbxx

Nice take on the MUSE card, Bev! The layers of your flower add a lot of textural interest. Well done :)

What a delightful trio of cards. Love the CAS design of the first with the bloom as the star. And wow to your TO card, love the grey base and what amazing fussy cutting. Card number 3 is so much fun and working the colour q cards to perfection. Great to see you at TO

Wow these are spectacular!and sorry to hear you are have a time of it :(take care... and thanks for taking the time to join us over at Muse this week x

Wow these are spectacular!and sorry to hear you are have a time of it :(take care... and thanks for taking the time to join us over at Muse this week x

Oh Bev! I am so sorry to hear that you suffer with these headaches! I will be praying for you, friend!!

Your cards are great!! I am going ga ga over that amazing flower you created!! what a lovely layered masterpiece with the beautiful bling center!!

Sean's card is perfect too! such a great design : ) I love the large lettering inside the shaker!

Bev I am so sorry to hear you are dealing with another migraine! :( I am amazed that you are able to create such fabulous cards when you have so much on your plate with YKW and DH. Both of these are fabulous for the challenges. Love that pretty carnation and the shaker for Sean is awesome! Thank you for sharing with us at both Muse and the colourQ this week!

Your cards are so wonderful Bev, I especially love the personalised bright fun shaker!

Beautiful cards Bev, particularly love the floral with that very fine glitter strip, looks wonderful.
Hope your migraines have left for a while I just had a cluster last week and end up feeling as though life is so on hold as there is just the pain there. Truly feel for you. Xx

I'm sorry that you are suffering from those dreaded migraine again Bev. I hope today bought much needed relief from them. Your cards are amazing!! I love.the carnation card, great color combo. Love the shaker card for your grandson, and what kid doesn't like seeing their name on something?!! Hope the weekend is better for you my friend. Hugs, Brenda

I'm sorry that you are suffering from those dreaded migraine again Bev. I hope today bought much needed relief from them. Your cards are amazing!! I love.the carnation card, great color combo. Love the shaker card for your grandson, and what kid doesn't like seeing their name on something?!! Hope the weekend is better for you my friend. Hugs, Brenda

Beautiful cards - one very feminine the other more masculine! I am sure they will bring joy to the recipients!
Hope those migraines leave you alone!!!
Have a great weekend,
Susanne

Great set of cards! Love your big, fluffy pink bloom and Sean's card is awesome - sure to become a keepsake! So glad you joined us at Muse this week, my friend. Hope you're feeling better!

Another boo-boo head? I feel so badly for you! Wish I had some magical powers where one wave of a wand would kick those bugger headaches to outer space! Like Tracey, I'm so in awe of the fact that you managed to create 3 amazing cards while in pain!

The layered flower is soooooo pretty! Love the center blings and love that sentiment! Sean's shaker card is going to be a hit with all those brightly colored beads! Love the bold letters! BTW, "Sean" looks fine to my eyes! No blurriness at all :)

I'm so sorry that those migraines are back Bev, but know I'm praying for relief for you. You still managed to make a couple of beautiful cards. I love the carnation and the pink and gray combo on the first card and what kid wouldn't love a brightly colored, personalized shaker. You did good. :)

Man...wish those darn migraines would stay away for good! Love Sean's fun card...shaker cards intimidate me too much to try. And your other card...a study in elegance!

OH, Bev, what a beautiful flower card. I love the pretty color combination & darling flower. And, your shaker card is SO fun and striking! I'm sure your grandson will love it.

Hope you are feeling better.

Oh, boy, hope those headaches are something of the past by now, Bev!!!!
That is such a stunning Carnation you've got on the first card and it looks wonderful with the glitter ribbon and the grey base!!!! So beautiful!!! And your card for Sean is a fabulous masculine card!!!! Love the bright orange and the colours of the beads and how you've got the name on the inside of the shaker!!!!! So cleverly done!!! Two great cards, my friend!!!
Have a great Saturday!!!!
Hugz

Oh, Bev ... your flower is gorgeous. Love your interpretation of Jenni's card. Hope your headaches are gone. Hugs, Marilyn

Great set of cards, Thank you for joining us for The Challenge.

Hope those YKWs have skedaddled, Bev ... and you're pain free and enjoying Sunday! Cool card for Sean ... I'd never have thought of creating a masculine shaker ... but you not only thought of it, you nailed it! Graphic, crisp, fun and brilliant ... he'll love it! Gorgeous texture-y layered bloom ... you captured the delicious frilliness of a carnation so brilliantly ... love the addition of that shimmery ribbon ... sooo pretty! Delighted to have you playing along with us at Time Out, mon amie! Miss you hugely! Big hugs & bisous, Anita :)

Your cards are lovely! Thanks for joining us this week at The Challenge!

Great cards, everything is so well executed! Thanks for taking TIME OUT and joining our challenge!

Love your beautiful interpretation of this week's Muse card; the details are exquisite.

CONGRATS on your HM at Muse, Bev! Your card is absolutely beautiful, and your shaker card is so fun!

What a beautiful pink flower you've created Bev. And Sean is going to be so darn proud of that card!

Glad to see you've had time to craft along with everything else going on in your life. My husband and daughter have migraines and I can see how debilitating they are, so hope you get some relief between them. Your card for Time Out is stunning and I love all the different layers of the flower. Its such a stylish card, especially with all the background gray and that glittery ribbon is gorgeous. So very happy to see you at TIME OUT and take care of yourself!!

Such a treat to see a totally feminine card and a totally masculine card all in the same place. A soft and frilly flower vs. a bold sentiment - and they are both winners. I love shakers and one like this with your grandson's name on it is totally cool! And I'm adding that font to my collection in case I ever fire up the Silhouette again!