...Be A Cubs Fan!!!!!! Just in case you didn't know, the Chicago Cubs won the World Series last night. Since most of us who follow the Cubs are tired of hearing how long it's been since they last played in, or won a World Series, I won't go into that. But last night, in extra innings, playing against a very good Cleveland team, they won. I hope you don't mind me posting about this as I have no choice in the matter. In my instance, being a Cubs fan is genetic. My great-grandmother, my grandfather, and my dad have passed the Cub fan gene down to me. It has skipped a few of my children, but some of my grandchildren have inherited the gene too! So....WooHoo!

That being said, I have a card to share for the Muse Challenge today. Estelle has given us this sweet card as an inspiration, and it took me a day or two before my ideas clicked. Didn't she do a beautiful job?! And since my card fits into both the SSS Monday and the SSS Wednesday Challenges, I will play there too! 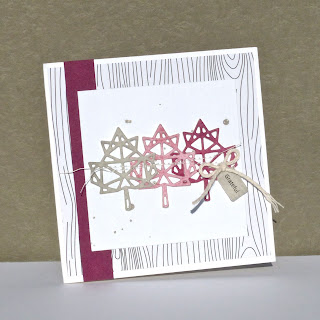 I used the trio of leaves, the woodgrain, a small bow, and a cranberry color, as my inspiration though they're not quite the same as what Estelle used. My card looks like this: 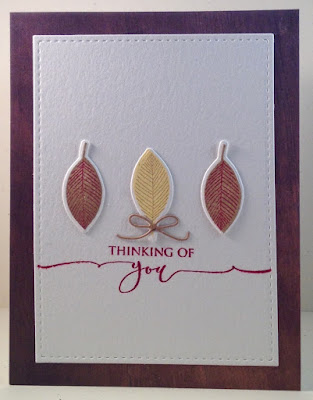 Even though you can't tell from the photo, the background paper is woodgrained. I used a ME die, some NBUS MFT Flashy Floral leaves, an AE bow die, and a Gina K. sentiment stamp. The brown ink is ME's Hazel, Ranger Cranberry and Altenew's Buttercream. EZPZ lemon squeezy! And with that, I will leave you for today. Happy dances everyone!!!

Wonderful card Bev!!! I love your clean design and lovely sentiment.
And this little bow is the perfect detail on your card. This is so pretty and fun!
Thank you so much for playing along with my Muse Challenge!
Estelle.

PS: last night, in France, we could hear the applause and cheering from Chicago!!! Ah ah ah!
Congrats guys!

What a beauty! I love your leaves and how you positioned them. Sweet bow too and a perfect sentiment for it! Yay Cubs!

Bev, you LEAVE me breathless! Since they among my most favorite of all stamps, it's so wonderful to see a few I don't have! LOve it, and that gorgeous wood-grain paper, too!
=]

Congratulations! And super pretty card, too!

Yahoo for your Cubbies! What an incredible series that was...and the finish...holy moly! Love your beautiful card! The trio of leaves is gorgeous.

Unpacking is going well. Going to start remodeling for my mum's room next week! Have to put pictures up and do some painting but all is moving along just fine! Of course, craft room hasn't been touched :(

Congrats...so excited to see your Cubbies win last night, what an amazing game and speak of amazing, your card is amazing and sweet too. Love those fabulous leaves.

These are fantastic Bev, your trio of leaves works perfectly on both designs!

Yours is a beautiful CAS take on Estelle's card, Bev. I think a lot of us were rooting for the Cubs, even if we aren't baseball fans.

Yay again for your Cubs and yes...talk about a nail-biter! Two strong teams made for a stellar series! I'd like to see a major league game some day; maybe even your Cubs...at a home game...and then, we'd have to come visit you, of course! On my list! Your leaves: oh my oh my ohh my! A trio of pretty, and how cool is that stylized 'you'! Autumn awesome and Muse marvelous! Trees around here are pretty much bare of leaves, however, we're having a spate of uncharacteristically warm weather. One of the ski hills opened up in anticipation of an 'early' start to the season. Oops! I'm all good with sun and 'warm-ish'!
Hugs, love and misses~c

Hi Bev, love your card that is a beautiful clean design. The leaves are perfect and the bow adds that special touch. The sentiment with 'you' is so special and finishes your card in fine fashion. Hugs, Marilyn

I'm behind on seeing this one, Bevie, but glad I didn't miss it altogether! It's a truly genius make on the MUSE card (another winner if you ask me!!) and a CASlicious design that I'm pinning for future use!! Love and hugs, Darnell

Go Cubs! (even this nonMLB fan loves that they won)
Love your take on the Muse card and think that bow is the sweetest little detail!

I love your take on Estelle's card Bev! I love the leaves you used and the colors. Love the mixed fonts on that sentiment as well. Well done my friend! Also loved that your Cubs won the World Series too!!! Hugs, Brenda

Yay Cubbies! Seems I should have stayed around for the whole series, Bev, not just those games at the Lake House! Sounds as though that last match was one worth seeing! Beautiful card ... went in for a closer look at that woodgrain ... rich and texture-y and perfect with those delicate leaves (and that sweet bow)! Miss you loads, mon amie! Hugs & bisous, Anita :)

gorgeous card! love these warm colors and the design is so beautiful and simple! Thanks for joining us this week on Simon Says Stamp Monday Challenge Blog! Barbara

Love the little details of the upside down leaf and the bow! So glad you joined us at Muse this week!

Fabulous card, Bev! Those leaves are quite beautiful, as is that wonderful scripty sentiment!

Great interpretation of Estelle TBT's Muse card; I love how your script sentiment goes from side to side, similar to the vertical cranberry stripe (but rotated 90 degrees).

Wow! Love this Bev! What a great CAS design & the colours are beautiful!