In between my "nursing" duties, and moving DH's office from the second floor to the first, as well as my 'regular' household chores, my craft time has really taken a hit. I barely have time for anything else. And crafting time has really taken the way, way back seat. Don't like it one bit. Don't like that while I can glance at your posts and see the heart-lifting creations you all have there, I have little time to drop in a comment. Please bear with me for a bit longer, and hopefully DH will continue on his recovery, and I can get more back to normal. One can only hope...

I had to make a couple cards today. No choice, and they're already late for the recipients. Tomorrow two of my granddaughters turn one and 21. Crazy isn't it? Just yesterday Jess was a baby, and here she is already in her final year of college. Where did that time go??? And Miss Avie already one...little tow-head blond and a chubby, happy baby. She's pretty amazing; so wants to be 'big' like her three older siblings. I can see the wheels turning in her sweet little head. *sigh* Both are precious.

This first card is for Jess. I used CAS(E) This Sketch as my jumping off point. This is the second version; first one totally sucked. Like this one much, much better. It appeals to my sense of white space. Awesome sketch, isn't it??!! 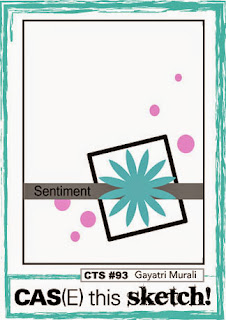 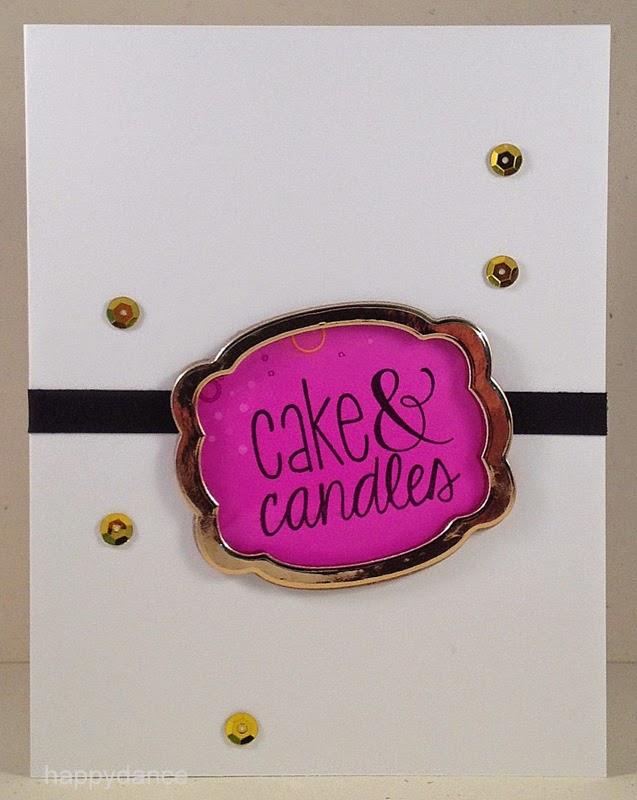 Started with my Neenah white base, and used a scrap of black, and a bit of gold foil from Michaels. Some gold sequins, an AE stamp with SU ink, and some chipboard to raise the gold frame. Now here's the weird part...The pinkish acetate isn't. It's part of a label from the Blackberry Apple fizzy water I bought a while back at K-Mart. I know, right? Loved the color, and wished for some acetate like it in my stash. Then thought too much would be gaudy, but a touch would be fine. Trimmed the label and used it today here. You can even see some of the bubbles in the upper left corner... Crazy, huh?!

Miss Avery's card is much more conventional. Saw the "banner" cue card over at CASology, and thought I'd pop this card there. It might be too busy, so if it is, the DT and Melissa should take it down. While busy, it's not too froo-froo. Someday she'll like it. 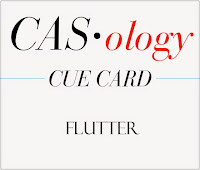 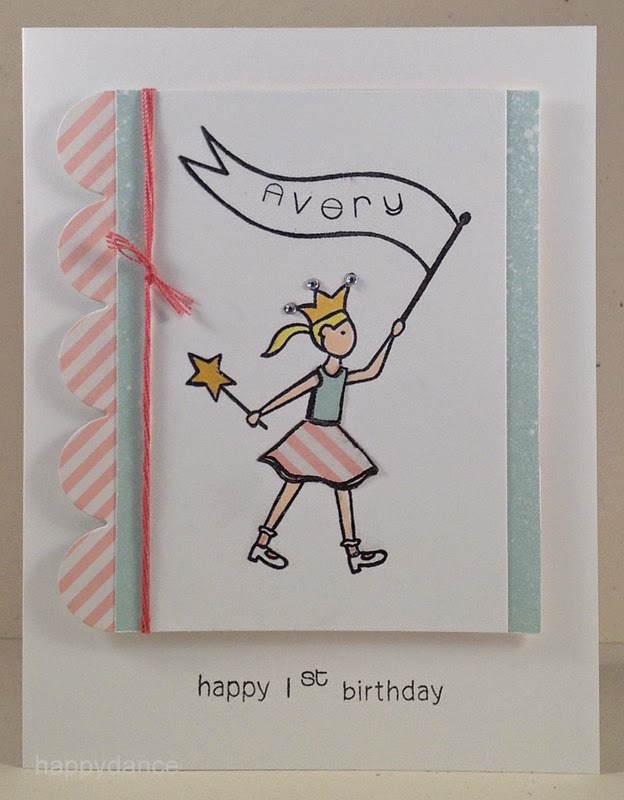 I found a double sided scrap in my dp scrap box, and it tripped my trigger. Black SU ink, and the image is from A Muse stamps, and the other stamps are from MFT and NN. The scallop die is RC. Some Glossy Accents on the wand's star, and a few bits of bling on the crown. A couple of Copic markers, and a bit of embroidery thread finishes this off. The panel is raised a bit with some pop dots. I totally cased a card by Carly Robertson. Can't seem to find a link, but I'll show you her card: Isn't this just sweet?! Anyway, I need to get going and get some work done. Thanks for your patience. I'll try to find a minute or two and get to some commenting. Happy dances everyone

I'm so glad you were able to get these cards made, Bev! Often times, I don't realize just how much I "need" to create until I don't have the luxury for a while! BIG hugs to you as you work through this time in your life!
I love both of your cards! Both are so perfect for their recipients!!! I don't think Avery's card is too busy at all! See all that white peeking through?!! :)
Thank you so much for joining us over at CASology this week! Here's hoping things smooth out little by little for you! Patience and prayer...HUGS!!! :)

Yay, Bev ... you're here, how fabulous ... and with such fun cards! Oh my, the fushcia and gold label is so brilliant ... so perfectly girly and glitzy for Jess! Avery's banner waving birthday princess is a delight ... so sweet how you popped her name into the fluttering banner! Don't worry about commenting, my friend ... we know you're there and you've enough on without adding that to the list! Prayers and hugs heading your way! Anita :)

So glad you were able to squeeze a bit of crafty time in to make two fantastic cards! Love your gold foil and your take on flutter. Thank you so much for sharing with us at CASology!

Oh isn't craft time just good for the soul? So thankful you were able to get time to create today. Happy birthday to your gorgeous granddaughters. Their cards are fabulous. Love the fun/elegance of the first and adorableness of the second.

These are both fabulous, Bev! Your first card is perfect for a 21 year old - cooly elegant. And the second card is so very sweet for Avery. Love the name banner and paper pieced skirt! Thanks for playing along with CASology this week!

Miss Bev, so happy that you found time to make these sweet birthday cards. Please take it easy with all your moving, don't want you getting hurt too. Funny things about children, they all grown up and way too fast if you ask me.

Nothing like a bit of crafty "me" time to recharge the ol' batteries! And I'm sure the grandkids birthdays wouldn't be the same without a handmade card from you! Well done!

It's good to see you sneak in a little card time, Bevie! You've made some delightful ones for your sweet granddaughters who are twenty years apart in age, so cool! Each of your cards is so perfect for the challenges. I really love your fluttery flag for Avery!! Take care of yourself; you're in my prayers!! Hugs, Darnell

So nice to see you out & about...even if it is just for a minute or two! I really, REALLY admire your ability to put your mind to a task and sha-zam ka-bam...it's done...as in two magnificent cards!

As for sweet little Miss Avery - I'm sure that a marching princess complete with a crown, a personalized banner AND a magic wand will have her grinning from ear to ear!!!

I'm so glad you HAD to craft - I know you need the break. And never, ever worry about not commenting - life gets in the way for all of us. When school became way more than full-time for me - there was nothing better than just browsing blogs (even without time to comment) and reveling in the colors and patterns and fun stamps. It was therapy and I always be grateful to all of my crafting friends.

Your cards are just perfect. 21 needs bold colors and the gold is a great touch. And 1 needs scallops and stripes. Love them!

Gorgeous cards, Bev! LOVE how your used the drink label for your cool 21 card ... so creative and resourceful of you! And the darling card for Avery is really the best! She won't realize it now, but when she's older and looking through her baby book, she will flip over your card which has been personalized with her name. I loved looking back at my favorite birthday cards when I was a kid, and believe me, none of them were anywhere near as special as this! Prayers to you and your husband for getting through this challenging time.

Your cards are wonderful Bev, I love them all!! I don't know how time flies by like it does but it does. Sounds like you have your hands full Bev and I know what you mean about not liking not having any crafty time. Hopefully when things get better with your hubby things will be more normal, what ever normal is cause I haven't a clue anymore. lol Hugs, Brenda

Oh, these are all wonderful! I love the colours you used on the first one -- that gold frame is so fun! Great take on the sketch!

Delighted that you interrupted your Craftus Interruptus to share an update and two supremely wonderful cards with us! The fushcia and gold pairing is so classy; Jess will adore this! The princess waving Avery's personalized banner: darling - and a charming take on 'flutter." A second card that will be adored - now and later, too! As for commenting: no fretting allowed! We know where you are! Of course, we miss you, but knowing you're safe, healthy and happy is most important. Enough on your plate for now. You'll be crafting again soon. Prayers and hugs zipping your way!
~c

So glad you were "forced" to do some crafting! Both came out beautifully - you haven't lost your mojo! And don't worry about commenting - you have enough going on!

How fun...one and 21! Love your banner flag which really does look like it is fluttering in the breeze.

Love the graphic take on the sketch challenge and your fluttering banner is perfect for CASology this week! So glad you joined us, Bev!

love the colors you used. awesome work! thanks for joining us this week at CAS(E) This Sketch!

So glad that you could get some time out for crafting these awesome pieces :) I am sure crafting is like a therapy, it sure relaxes me :)

Oh my goodness, surely it was just yesterday that you were sharing news of the safe arrival of Miss Avery? And now she's one? Nope, I can't believe it! Wishing both birthday girls very happy and special days.

Hope hubby continues well with his recovery and I hope you aren't overdoing things.

The time away from crafting isn't fun but you are certainly making up for it when you do create. The first card is lovely - the use of the label was a genius move. The colour is beautiful (and I love those bubbles you can see) and it really pops against the card.

You card for Avery is beautiful. I love how you've personalised it too. Such sweet pastel colours. I might have to case your case. :)

Two of THE most perfect birthday cards! each so unique for the birthday girl celebrating their milestone birthday! : )

My thoughts and prayers are with you and your DH and hope you'll be back to your craft table soon!

Hi Bev, so glad to see you finding a little crafting time. A little bit can go a long way when life gets crazy! I love both cards, and I admire how personalized your cards are...so much love goes into each one! I love the fluttering banners...so perfect for CASology this week!